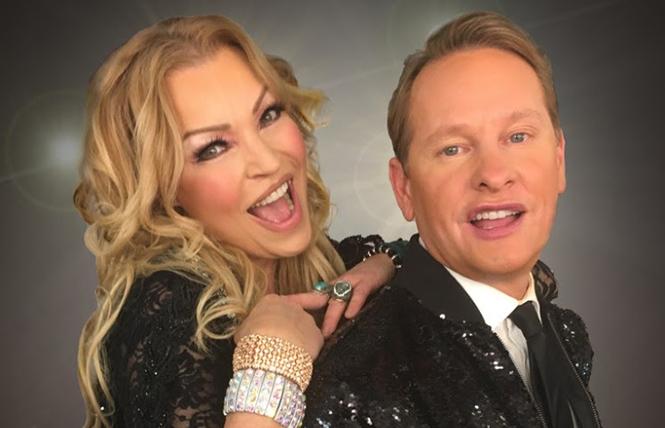 "One of my kids' guncles bought them this book," says Weitz, better known to gay admirers as dance music diva Kristine W, whose 17 number-one Billboard dance hits include "Stars," "The Power of Music," and "Save My Soul."

That was back in 2006. Kristine, then a mother of two young children and already a staple of the circuit party scene, found much to appreciate in "You're Different and That's Super" Kressley's unlikely Queer Eye-fame-enabled foray into kids' lit.

"It was about this horse who was different than other horses," recalls Kristine. "It was meant to teach children to accept each other for whoever they are." (Kressley's hero, Trumpet, was in fact a unicorn. His pals, the ponies, were Tuckabuckaway and Wooligan).

"My kids grew up going to Prides. They'd already met families with two moms and two dads; plenty of drag queens; my longtime makeup hair person is trans," Kristine explains. But while she didn't need the book as a way to introduce queer topics to her children, the book appealed to her on an entirely different level: "Carson and I are both horse freaks!"

Kressley, now 49, has been an equestrian since childhood, ultimately competing and winning championships as a member of the U.S. World Cup Saddle Seat Team. Kristine, also a lifelong rider and former competitive jumper, raises horses on her ranch outside of Las Vegas.

Over the next few years, Kristine and Kressley occasionally crossed paths, trading horse tales when they were hired to appear at the same gay parties and cruises.

"I had always wanted to do my own one-woman show," chatters Kressley. "But I was a still a little intimidated by live performance." 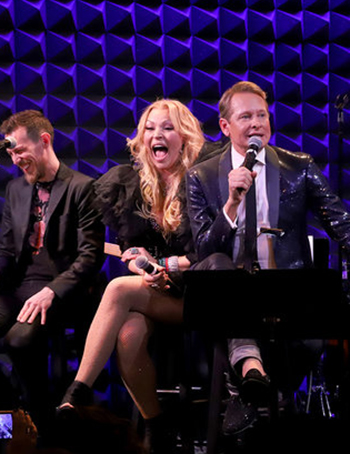 In fact, Kressley has played minimal-singing roles in Damn Yankees! and The Drowsy Chaperone at the Ogunquit Playhouse in Maine. But he had not been their primary attraction.

"I'd been talking to my agent about doing a show that combined music and comedy," says Kristine. "I'd watched the Lady Gaga and Tony Bennett shows, and the little one-liners and banter they did reminded me of old TV variety shows, and the nightclub acts when I first came to Vegas.

"You know those old school acts like Eydie Gormé and Steve Lawrence. They did music and comedy together. Sometimes they'd do sketches, but a lot of the comedy was impromptu conversation."
The pair began to collaborate in earnest over a breakfast meeting when Kressley was in Las Vegas to provide television commentary for the 2017 Miss Universe pageant.

"We talked about what elements would make a cabaret show like this work," says Kristine. "And since then, as we've spent more time together thinking things through and rehearsing, it's started to feel really natural. I've become more familiar with his energy. I know his timing and his rhythm. Carson is genuinely funny all the time, he's funny driving in the car."

But Kressley isn't just the comic counterpoint to Kristine's singing. Having put in time training with her music director, he provides vocal accompaniment throughout their act and even has his own big solo number ("Pour Me A Man," from the relatively obscure mini-musical Miss Gulch Returns!)

"It's all very campy and fun," Kressley says of the show, which has been performed only twice before, over a single weekend last year; first at Joe's Pub in New York and then a nightclub in nearby New Hope, New Jersey.

"I hadn't done anything that scary for a long while," recalls Kristine. "This sort of two-person act is a lost art. You have to know when to be the funny one, and when to be the straight man. You can rehearse it a thousand times, but so much of it is just about whether you have the right chemistry."

The show's well-received and Kristine says that this weekend, "We'll probably be videotaping so we can pitch the show to promoters and get more bookings."

Meanwhile, Kristine continues to work on a new dance album for release later this year, and Kressley is teaming up with his old Queer Eye castmate Thom Filicia on the new Bravo interior design series Get a Room with Carson & Thom.

But this weekend, they'll be riding high together again, sharing stories and songs and generally horsing around.

"It's a little hard to describe," Kristine says of the show.

"It's us just being who we are," says Kressley. "It's a lot like Hamilton, but better, I think."