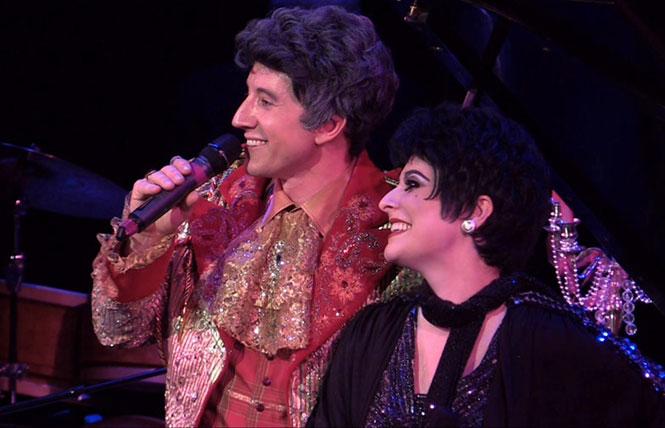 David Saffert and Jillian Snow Harris as Liberace and Liza Minnelli. photo courtesy of Feinstein's at the Nikko

On September 13, two show business legends will take to the stage of Feinstein's at the Nikko when Liberace And Liza Live! A Tribute comes to the club for what promises to be a gay night of entertainment.

Classically trained pianist David Saffert will perform as the flamboyant Liberace, while Jillian Snow Harris will show that life is a cabaret with her take on Liza Minnelli. Bo Ayars, who served as Liberace's music director for thirteen years, will be conducting the Feinstein's show.

Liza (hopefully) needs no introduction to readers of a gay publication. Daughter of show business legend and gay icon Judy Garland, Liza herself was embraced by the LGBT community early in her career. She returned the adulation, becoming one of the first major stars to publicly stand with her gay fan base. Harris spoke to the Bay Area Reporter about the connection between Liza and the LGBT community.

"Because she's fabulous!" Harris said. "And honest, vulnerable and fearless. I'm gay, and struggled to find comfort in my own identity. Liza, Judy Garland, Cher, Dolly Parton; I find all of these ladies inspiring. They are absolute individuals and teach us not to apologize for who we are. Liza is still evolving, which keeps everyone guessing. She is a master at being herself, I think that's her secret. Her popularity will endure for future generations to come, and I hope that in some small way I'm helping to plant those seeds for younger audiences." 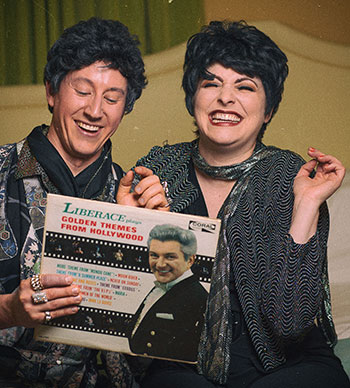 David Saffert and Jillian Snow Harris as Liberace and Liza Minnelli. photo courtesy of Feinsteins at the Nikko

Harris has a strong background in comedy, being a graduate of the American Musical and Dramatic Academy in New York City. She has performed at the Gotham Comedy Club, The Laugh Factory, and Comix NYC as a Liza impersonator, yet promises that her take on Liza does not disparage the singer.

"My interpretation is treated seriously and with the utmost respect," she said. "It is a tribute to one of the greatest living legends of our time. Are there humorous moments throughout the show? Absolutely. Liza herself is a very funny woman. Also, we are talking about a show where Liza and Liberace are BFFs. That in itself is fairly amusing, though they have plenty in common, besides sequins."

Harris' interest in musical performance goes all the way back to her childhood in Salem, Oregon.

"I was a very shy kid, and musicals were a magical escape," she said. "Naturally I wanted in on that magic. I'm lucky to have started performing young, in front of my stuffed animals when no one was looking. Expression is so important for growth, and it eventually helped me step out of my shell and achieve another very important artistry that some like to call social skills."

Harris also spoke of the personal connection she feels towards Liza, and why she feels moved
to perform as her.

"When I was a child my mother brought home a beat-up copy of (Liza's film) Stepping Out," she recalled. "From the first moment she appeared onscreen, I was a goner. Sheer talent aside, what caught my eye the most was her remarkable ability to be vulnerable. Yes, I was 8. I still struggle with this in my life, and I guess I wanted to emulate someone who didn't give two flips about what people thought. I wanted to let loose, so who better to emulate than Liza? I do feel a kind of personal connection to her in the sense that through her voice, I was finally able to find my own."

Saffert, who has performed in the actual mansion that Liberace once called home, talked about his connection to Liberace, a brilliant pianist who often flew out on stage bedecked in jewels and furs.

"Liberace and I were both from Wisconsin," Saffert said. "We were both classically trained piano players that eventually found joy in combining the classics with current music. As I started working on Liberace's voice, I realized that my grandmother used to talk exactly like him. In fact, I love speaking as him because it reminds me of home and of many of the people I miss." 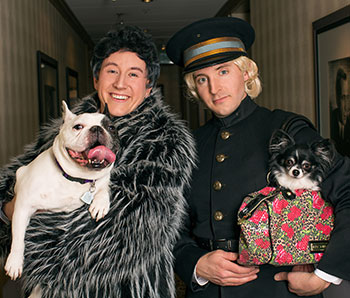 David Saffert as Liberace, with his dogs and chauffeur Scott Thorson. photo courtesy of Feinsteins at the Nikko

Looking at old clips of Liberace now, it's often hard to believe that his audiences never realized that he was gay. The entertainer remained deeply closeted throughout his life.

"We're celebrating Liberace's 100th birthday next May 19th," said Saffert. "He died in 1987, a time when homosexuality was still greatly disapproved of, joked about, and hidden. And because he died of pneumonia as a result of AIDS, Las Vegas did not give him the honors it gave all its mighty entertainers. Vegas never dimmed the lights or named a street after him, which it did for all its legendary performers. My sincere hope is that, had he lived, he would eventually have felt empowered enough to come out. And had he come out, I think he still would have lived quietly and privately, and his sexuality would never have made it to the stage."
Saffert also addressed why he performs as Liberace.

"My portrayal of Liberace started off as a stunt; something I added into a variety show that I had already created," he said. "What I never expected was that his music and comedy would get such energetic applause and laughter. I had to keep doing it. He was so warm and generous onstage. He wanted to share his music with everyone. And not only music, but clothing and rings. When I perform as him showing off my clothing and rings, I feel like I'm in 2nd grade doing show-and-tell. And his music is glorious and fun. I mean, I get to play Gershwin, Boogie Woogie, and Chopsticks. He was a joy of a performer and I feel honored and humbled to be playing him."

Like Harris, Saffert considers his performances to be a serious homage, albeit laced with humor.

"I do treat it seriously, but that doesn't mean it's not funny," Saffert said. "Onstage he was an incredibly funny and lovable guy who took his music very seriously. The trick is to play him honestly. I really don't need to add anything. His stage presence and persona was already bigger than life, so why make it anything more than it already was?"

Saffert feels confident that Liberace's legacy will continue to endure.

"So many performers were and are inspired by Liberace and his lavish, eccentric performances: Michael Jackson, Elvis, Elton John, Lady Gaga," he said. "It also helps that Liberace's likeness and image have been seen in some recent movies and television such as Behind the Candelabra, Blade Runner 2049, and Mozart in the Jungle. He's nostalgic to some, and eccentric, kitschy, and fabulous to others. He's one of few artists that had a 40+ year career in show business. No one was like him, and no one will ever be like him."