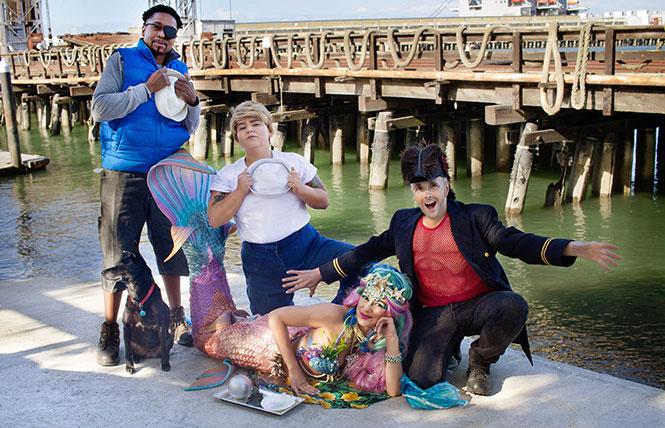 Frottage explains exactly what a drag king is.

"A drag king dresses in clothing of the opposite sex for entertainment purposes to poke fun at masculine stereotypes and for gender-fuck purposes, similar to drag queens who parody women and femininity," he said. "It gets confusing when you reject the binary system, but basically that's it in a nutshell, or nut sac as the case may be."
For a long time drag kings existed in the shadows of the queens, but Frottage feels that kings are coming into their own.

"I think with the world being more exposed to drag, kings are growing in numbers and able to work at more venues and festivals, but we are a long way from seeing drag king as a job title," he said.

Frottage has been a busy drag performer for over twenty years. He spoke of the genesis of his character and what inspires him to do drag.

"Fudgie is a character that burst out on the scene after years of inspiration from Queens like Divine, Doris Fish & The Sluts A-Go-Go, and Miss P. from the Parliament House," he recalls. "Before I chose the name I would wear male drag in rock bands I was in or perform in some of the Sick & Twisted Players shows in drag such as Mr. Brady in Friday The 13th Starring the Brady Bunch. In the early 90's Leigh Crow was performing as Elvis Herselvis and that inspired many of us to take the stage as kings. Fudgie's basic backstory is that he is a child of the free love '60s and free drugs '70s and that I was discovered by Versace while feltching Donatella at his Miami mansion while in a K-hole during one of his infamous orgies, but part of that story is not true. The part that I could get sued for is the part that isn't true." 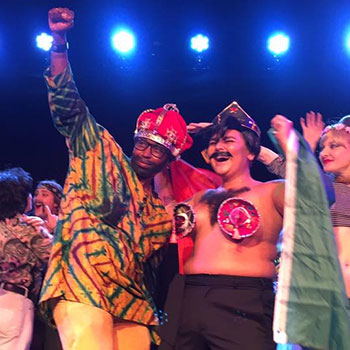 A group number at 2017s Drag King Contest, where contestants El SeVan and Emjay Mercury tied for the win!

He noted that drag is an outlet where he can be funny and creative at the same time, and promises that there will be a lot of humor at the drag king contest.

"This is an all-star show and a contest, so the energy on stage is always amazing and fierce," he pointed out. "Having a theme and encouraging the audience to dress up adds to the fun, makes it more of an event than a show because everyone participates. The nautical theme is broad: sailors, mermen, mermaids, pirates, fisherman, Love Boat, Gilligan's Island, Titanic, Poseidon Adventure, sea monsters ..."

But the entertainment doesn't begin and end with the show's contestants. Frottage has lined up an equally colorful line-up of celebrity judges, beginning with the ever-popular Leigh Crow. Still fondly remembered for her '90s performances as Elvis Herselvis, Crow now hosts Dandy, a monthly drag king cabaret at Oasis.

Also serving as judges are April Kidwell from Showgirls, The Musical and I, Nomi, 1998 San Francisco drag king title holder Arty Fishal, and Max Manchester, drag king title holder for 2016. Wang Newton from New York and WangTV fame, and Flare from Toronto, a tassle-twirling king, will also appear as guest-judges.

Frottage couldn't stop singing the praises of his co-host.

"Sister Roma is a whore, a media whore, the most photographed nun in the world," he said. "We have been friends since the 80's and I love working with her, she is a multi-talented comic genius and emcee extraordinaire."
The proceeds from this year's contest will benefit two organizations which will warm the hearts of animal lovers. PAWS-Pets Are Wonderful Support, is a charity which provides no cost food and vet care to people with AIDS and other disabilities. Rocket Dog Rescue is the other beneficiary.

"PAWS has been a beneficiary for many years," Frottage said. "The mission of PAWS is to preserve, support and nurture the human-animal bond for those most vulnerable in our community. Rocket Dog Rescue is a volunteer based organization serving the greater Bay Area, dedicated to saving homeless and abandoned dogs and placing them in foster and then permanent homes."

Frottage has very personal reasons for supporting these charities. He's the proud owner of two Pomeranians and two orange tabbies, and says that his pets keep him sane.

"El Sevan, one of the Kings who won last year's contest ¬-there was a tie for first place- will again be performing with his service dog, Olive." Frottage said. "She is a talented Tibetan Mountain Dog who was a rescue. She is a wonderful dog."

In addition to the contest, there will be dancing before and after the show. In keeping with the theme of the contest, DJ Mysterious D, formerly of Booty, will be playing nautical-themed songs as well as mash-ups.

"Do not miss this show," says Frottage. "Don't opt for the lame excuse, 'Oh, I'll see pics and videos on social media tomorrow.' Because whatever you do see online, it will not equal being there in person feeling the energy, love and community this event generates."