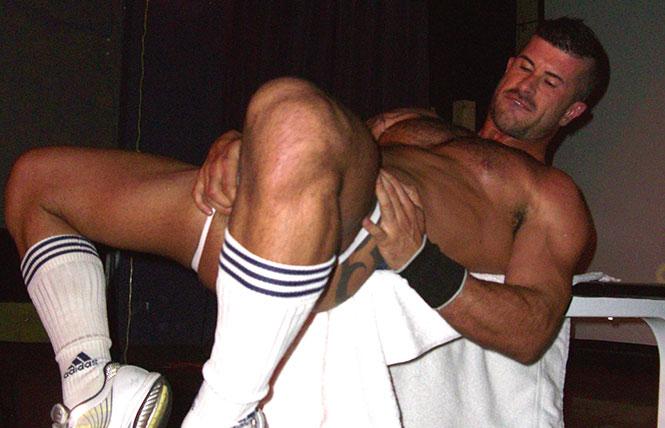 Adam Killian in one of his epic solo shows. photo: Cornelius Washington

Some of The Nob Hill Theatre's performers, guests and employees offered parting quotes in advance of the strip club's closure (see interview with the owners : http://www.ebar.com/events/nightlife_events/263099).

When told that many other performers have expressed a desire to perform with him, Killian replied, "Well, that's definitely both humbling and an honor. I love working with other talented, creative people and always welcome the chance to learn and share with other performers."

Asked what the Nob Hill Theatre closing means to him, Killian added, "I've worked at so many venues around the world, from Moscow to Sydney and almost every country that has cities with a gay scene. The Nob Hill Theatre was one of the first places I started, so it will always have a special place in my heart.

"I just performed there this past Gay Pride, celebrating my 20th anniversary at The Nob Hill Theatre. It's almost unbelievable that I've been blessed with such a long, successful and rewarding career. I cherish all the memories and the relationships with the people with whom I've worked along the way, and I am truly saddened that the stage is going dark for good. It's the end of an iconic era. All I can say is that I'm so grateful to Gary and Larry for reinventing the club these past years and for their enduring support of me and the gay erotic arts. The loyalty amongst all of us is what makes life a joy.
And last of all to the fans that have been there both new and old, I thank you from the bottom of my heart!

Other notable scholars offered their appraisal.

Author Boze Hadleigh said, "It's not just a sexual place. It was a place of community and a landmark that I will definitely miss."

Gay cultural anthropologist Bob Mathis-Friedman recalled visiting the theatre to see a movie during the San Francisco Film Festival. "From the moment that I walked in, I could just feel the decades of the theatre's history," he said. "I must say that the owners are very smart to retire at the top of their game."

Dancer Papi Jay, who only started a few weeks ago, said, "The owners are so cool. I've met people from all over the world and I've made great money. It was a great beginning for me."

Shelby Steward, a theatre clerk for twelve years, quipped, "I laughed. I cried. Mostly, I just came on my lunch break!"