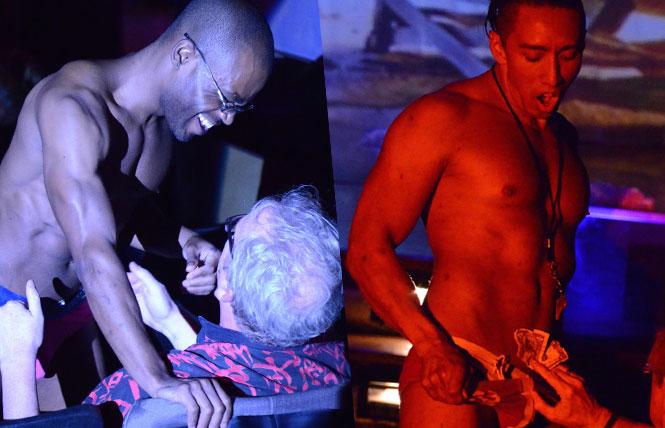 One of the most difficult things to do in art and entertainment nightlife is bowing out while you're on top. Before the Chippendales and Magic Mike franchises, there was The Nob Hill Theatre, the world's first gay male strip establishment. 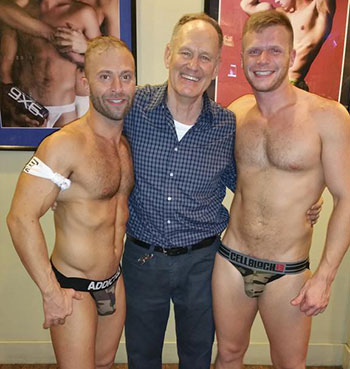 Opened in 1911 under various businesses, including a jazz club where Louis Armstrong, Jr. once played, the renovated property was a transcendent building, dedicated to glamour, grit and the prime focus of gay sexuality.

However, on August 19, the theatre's owners, Gary Luce and Larry Hoover, will bring down the curtain, turn off the lights and bring an end to a very lively part of erotica culture.

The Bay Area Reporter has had a long, sterling relationship with the theatre and its owners and so, I was prepared to document and reflect, with Gary and Larry, as they set about preparing for the theatre's final performances, and offer tribute to a moment in the sexual (r)evolution that could happen only in San Francisco.

What most surprised you about operating the theatre?

The local crowd and how fun, interesting and friendly they were. We have made great friends here. In addition, we were surprised at the number of foreign visitors the theatre attracts from all over the world. 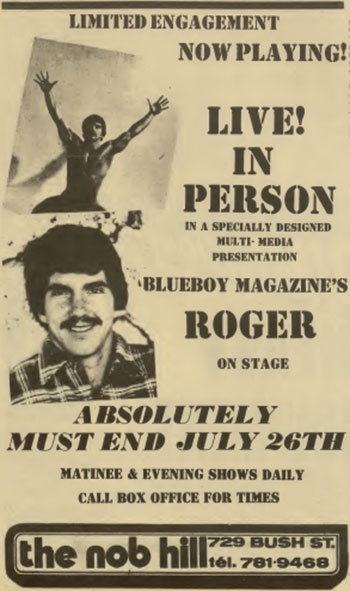 What will you miss most about operating the theatre?

Can you offer a critique of the lack of other similar venues?

We were a little intimidated at first. These were icons in our eyes, people I have watched on DVDs for years. We thought that they would be aloof and to themselves. We were so pleased that that has not been the case. We open our apartment at the theatre as their 'green room' before and after their shows. We have really enjoyed getting to know each of them. We have to give credit to Michael Brandon for assisting us in making many of the initial contacts.

Not disappointment, but some frustration in trying to contact the stars we wanted to perform here. I'm sure they're hit up so much about doing this or going here and there. It takes a long time to make the connection and actually get them here.

How has your sexuality evolved while operating the theatre?

It definitely has become more casual and fun. You can't host a successful Circle Jerk if you are not willing to take your dick out of your pants!

Who was your hottest house dancer?

Likewise, we can't and won't name one. We can say that these are the guys that keep us young. They have this fresh approach to life that makes them seem a little timeless. They work hard, have great senses of humor and seem to live life to the fullest. We are convinced they probably view us as "stick-in-the-mud old guys," but we can usually find common ground and have a mutual respect and caring for each other. They have been great!

Describe the elements for a successful live performance run at the theatre.

In our opinion, the successful live performance needs to be well thought-out. From the music to the costumes to the sets and special effects, it needs to be a show. The performers who think about the actual view from the seat of the customer usually provide the best shows. A performance should draw a customer into what they are doing. Performers have the opportunity to spend time in the audience with every customer. The performers who can make the individual audience member seem important, even if it is just for a few minutes, make for a successful show.

Someone who appreciates and respects what goes on here; someone who has a good time!

What do you want our readers to know about gay male sexuality?

That sexuality, in general, is a wonderful thing. That everyone should be comfortable with who they are and should be able to express themselves in a way that does not hurt others. 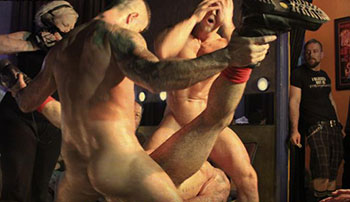 When you retire to Palm Springs, how will you explain San Francisco to your friends?

Friends and family know what we have been doing for the past eight years. It makes for good stories around the Thanksgiving table!

Is there a book in your future about operating the theatre?

We certainly have enough material for a book, but not so much the ins and outs of how to do it. My son is a writer and knew the original owner of the theatre, and worked for him in the Carmel area, as a first job, selling tickets and working the concession stand at one of the owner's everyday movie theatres. I have always hoped that my son would write a book about the original owner. It would be a best-seller in my mind.

Do you have any advice to LGBTQ business owners, particularly in today's economy?

Be inclusive and love everybody.

You have to be in tune with social media. The world is moving that way, so to be successful, you need to embrace it.

Tell me about the theatre's enthusiastic female customers. Did you ever consider having a ladies' night? If so, why did you decide against it?

We have many regular customers. Some like to chit-chat, others like to come in without a lot of conversation. Both have been enthusiastic of what we have to offer. Reading that customer and knowing what they want has always been important to us. We have always been more of a place for guys. Absolutely everyone is welcome, but we cannot be everything to everyone. We do what we do best and that is what we have stuck to.

What was the one moment in the theatre where the onstage sexuality most excited the audience?

That is difficult to say. There was the Fleet Week just after 'Don't Ask/Don't Tell' was repealed, and we had many customers here in uniform. Adam Killian was our headliner that weekend, and he was so good to the military men and women in attendance that night. He made it special for everyone. It was such a wonderful night.

What was the one moment in the theatre that made you gents shriek with delight, or dismay?

What do you want to tell the city of San Francisco as you retire?

We love San Francisco and are so glad that we were able to experience it firsthand. We will always remember our time here, the pride we have had in running the Nob Hill Theatre and the friends we have made, inside and outside of the theatre.