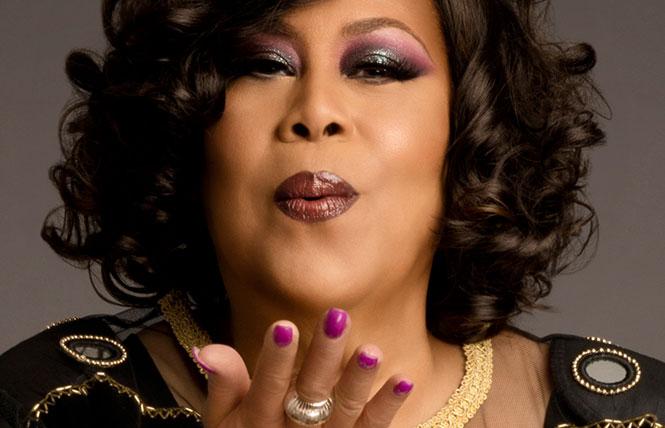 "I want to see the Donna Summer musical," says Martha Wash who performs in San Francisco for the first time in four years next weekend at Feinstein's at the Nikko. "She had so many hits, she was the Queen of Disco."

Wash, the one-time Weather Girl, remains steadfastly sunny even after years-long battles with record labels and producers whose profit-oriented presumptions may well have kept that particular crown from resting on her own head.

The 64-year-old San Francisco native was still a student at Polytechnic High when she saw an ascending Sylvester perform as the opening act for Billy Preston. Wash, who grew up performing in church choirs, later won an audition and became one of two back-up vocalists for the flamboyant gay singer, paired with her friend Izora Rhodes.

Martha Wash, Sylvester and Izora Rhodes in the early 1980s.

The exposure from accompanying Sylvester on four late '70s albums and two number one hits -"You Make Me Feel (Mighty Real)" and "Dance (Disco Heat)"-raised Wash and Rhodes' profile.

Stepping out of the background, the duo recorded a pair of albums as Two Tons 'o Fun before shaking off the pejorative nickname and re-branding as The Weather Girls with the release of their signature single, "It's Raining Men" in 1982.

The song, with music by Paul Shaffer of David Letterman fame, was a Donna Summer cast-off. Considering the song too kitschy, Summer-along with Diana Ross and Cher-turned down the opportunity to record it.

But performed by Wash and Rhodes with a winkless sincerity that allowed it to transcend mere camp, "It's Raining Men" sold over six million copies in its first year of release. Its seemingly immortal life has included a 2001 cover version by Gerri Halliwell that topped the UK charts, and a production number in the music-theater version of Priscilla, Queen of the Desert (A spirited Theatre Rhinoceros production of that show is playing San Francisco through July 7). 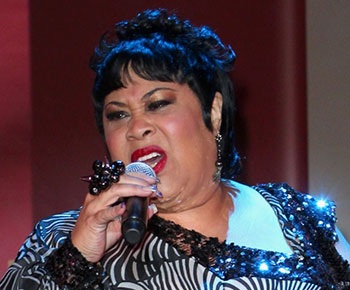 When the Weather Girls disbanded in 1988 after three hitless albums, Wash was in demand as a singer for house music dance tracks. The gale-force power of her voice swept Black Box's "Everybody, Everybody," "Strike It Up," "Ride On Time" and "I Don't Know Anybody Else" to the upper echelons of the Billboard charts. Wash is also the singer on C&C Music Factory's "Dance (Gonna Make You Sweat), a #1 hit in 1991.

Wash was not invited to participate in the lip-synced music videos and live performances made to promote these enormous hits, replaced by twig-skinny fashion models. Nor was she given proper credit or royalties. While she fought for-and ultimately won-combined settlements well into the seven figures, Wash has said that as helpful as the money has been, her notoriety for pursuing compensation and recognition has yielded its own benefits.

"I want to be known as a good person as well as a good singer," she says. "Lots of studio singers and musicians have thanked me for speaking up."

Wash was featured in 2014's Oscar-winning documentary Twenty Feet from Stardom, which furthered public awareness of the unsung singers behind much of our favorite music.

In recent years, Wash has released occasional music on her own Purple Rose Records and made regular appearances at Pride events and gay charity functions worldwide. In 2012, no doubt with the support of Paul Shaffer, she appeared on the Late Show With David Letterman to celebrate the 30th anniversary of "It's Raining Men."$49-$85 ($20 food/drink min.)

Between gay events, the documentary, and a series of concerts with Linda Clifford and Evelyn "Champagne" King called First Ladies of Disco, a younger generation of fans has begun to recognize and appreciate Wash's music. Among her champions is RuPaul, who credits endless plays of "Carry On," Wash's 1992 solo dance hit, with helping him process his mother's death. Wash has appeared on Drag Race and recorded an update of "It's Raining Men" with RuPaul in 1998.

"I have longtime fans," says Wash, "who bring young people with them to my shows. They say they're taking them to school."