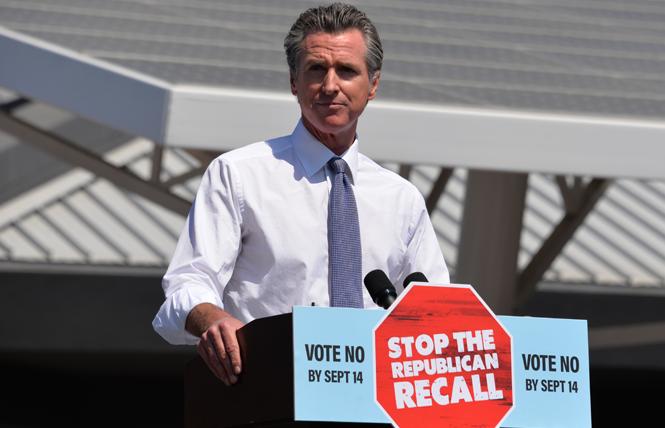 California voters overwhelmingly rejected the recall attempt against Democratic Governor Gavin Newsom, based on the preliminary ballot count. It hardly comes as a surprise, as multiple polls leading up to the September 14 recall election predicted it would fail.

With all precincts reporting their ballot counts as of Wednesday morning, 64% of the more than 9.1 million voters who cast ballots objected to removing Newsom from office nearly a year before he stands for reelection. Elected in 2018, Newsom is set to seek a second four-year term in 2022.

"It was over before it even started. I am very confident in that fact," gay Assemblyman Evan Low (D-Campbell), chair of the Legislative LGBTQ Caucus, told the Bay Area Reporter in a phone interview shortly after the polls closed at 8 p.m. Tuesday. "The take away is that Californians are smarter than being duped by the Republican strategy to try to focus on this power grab."

Equality California, the statewide LGBTQ rights advocacy organization, hailed the rejection of the recall shortly after CNN projected it had failed.

"Tonight, we have defeated the anti-LGBTQ+, anti-abortion, anti-immigrant, anti-science and anti-worker Republican Recall. We have affirmed our California values and our support for Gavin Newsom, the most pro-equality governor in California history, and his tireless efforts to build a California for all," stated outgoing EQCA Executive Director Rick Chavez Zbur, who is seeking a Los Angeles area state Assembly seat next year. "LGBTQ+ Californians — 12% of registered voters in the Golden State — and our pro-equality allies played a decisive role in this resounding victory. We stood with Governor Newsom because he has always stood with us — no matter the personal or political consequences."

At a campaign stop in San Francisco Tuesday, Newsom called the recall "a life and death decision" that could not only harm Californians amid the COVID-19 pandemic but also imperil the Golden State's economy. "California is the fastest growing economy of all western democracies over the last five years. No other state, no other nation has outperformed California ... not despite our values, because of our values."

Speaking to reporters later that evening after it was clear the recall had been defeated, Newsom said, "No is not the only thing that was expressed tonight. I want to focus on what we said yes to as a state. We said yes to science."

He thanked the state's voters, noting that with their help, "we rejected cynicism and bigotry and chose hope and progress."

Lesbian state Senate President Pro Tem Toni Atkins (D-San Diego) tweeted out her congratulations to Newsom for "defeating the Republican recall! Now that the baseless power grab is behind us, we can continue the momentum we've built on addressing the needs of California and all who live here. Let's continue to build back boldly."

With nearly 17% of precincts in the state reporting results by 8:30 p.m. a number of election polling watchers and news sites had called the race for Newsom. Planned Parenthood Affiliates of California was one of the first groups to congratulate Newsom on his "resounding defeat" of the recall attempt.

"Planned Parenthood is proud to have stood by Governor Gavin Newsom and worked to defeat this extreme and politically motivated recall attempt that would have taken California backwards if successful," stated President/CEO Jodi Hicks. "This was nothing more than an attempt to grab power from a Governor who has a stellar track record on some of the most critical issues facing our state — and in the process waste millions of taxpayer dollars and avert much needed attention from the real work our state is doing."

Should Newsom, previously the state's lieutenant governor and a former San Francisco mayor, maintain his double digit trouncing of the recall once all the votes are counted then he is expected to see his political stock rise nationally. He likely will be tapped as a surrogate during the midterm elections for President Joe Biden, who has seen his poll numbers tank following the U.S. military's deadly withdrawal from Afghanistan in August and a resurgence of COVID-19 this summer due to the Delta variant, leading him to impose a national vaccination mandate for most workers.

Biden, however, remains a popular president in California and flew west Monday to help stump for Newsom with a campaign rally in Long Beach. He echoed one of the main arguments Newsom has made about the recall, that it is a Republican-driven attempt to usurp power in a state where no GOPer holds statewide office and install a Trump acolyte in the governor's mansion.

"Well, this year — this year, the leading Republican running for governor is a — the closest thing to a Trump clone that I've ever seen in your state," said Biden. "No, I really mean it. And he's leading the other team. He's the clone of Donald Trump. Can you imagine him being governor of this state?"

Biden was referring to Larry Elder, a conservative radio host that polls showed was the frontrunner among the Republican recall candidates. He did land in first place among them with 2,373,551 votes, taking 47% of the recall ballots counted so far where voters answered the second question of who should replace Newsom.

But with his anti-mask and anti-vaccine mandate stances, Elder became the perfect GOP boogeyman for Newsom to use to rally Democratic voters and get them to take the recall seriously. Biden also drove the point home in his remarks Monday, praising Newsom for his handling of the health crisis.

"First, voting no, we'll be protecting California from Trump Republicans trying to block us from beating this pandemic," said Biden. "COVID-19 — Gavin Newsom has had the courage to lead, stand up for science. For the very thing he's been one of the leading governors in the nation, protecting his people and vaccinating his state."

Greeting the two men was the Southern California city's gay mayor, Robert Garcia, who has taken an aggressive approach to battling the ongoing COVID pandemic. He lost his mother and stepfather to the coronavirus last summer.

"So proud of California and our Governor. This was a huge win. Now let's get back to beating this pandemic," Garcia tweeted Tuesday roughly 90 minutes after the polls closed.

As the Bay Area Reporter's online Political Notes column reported Monday, LGBTQ community leaders across the Golden State rallied behind Newsom within the final week of the recall election. They took to the campaign trail to speak glowingly of Newsom's support for LGBTQ rights, manned the phones for get-out-the-vote sessions, and walked precincts to raise awareness of the off-year election.

Newsom has been a beloved figure within the LGBTQ community ever since he ignored California law in 2004 and ordered San Francisco officials to wed same-sex couples early in his mayoralty. He has continued to be on the forefront of numerous LGBTQ issues since moving up to Sacramento, from signing first-of-its-kind legislation addressing transgender issues to naming the first openly gay justice to the California Supreme Court.

It is why Newsom was able to rely on deep support within the Golden State's LGBTQ community to assist him in defeating the recall. EQCA marshaled its resources in recent days to focus LGBTQ Californians' attention on the recall election.

It paid for an online voter education campaign, including via the B.A.R., to explain how the recall ballot works. And it echoed Newsom's pleas for voters to leave blank on their recall ballot the question of whom among the 40-plus replacement candidates should become governor were Newsom to be ousted from office.

"Last night, President Biden delivered a message to California. He told us that the eyes of the nation — and indeed the world — were upon us. Let tonight's results be a clear response: Trumpism has no place in our politics, in California, in our world," stated Zbur late Tuesday.

Low, who has already endorsed Newsom's bid for a second term, had taken to the gay pickup app Grindr to talk to guys about the recall in the final weeks of the campaign. He told the B.A.R. he spoke with fellow users from Sacramento to Stockton to San Jose about the recall race, with 80% saying they opposed it.

"Refreshingly, our community was well aware of the history of Gavin and our community," said Low. "They were not ready to easily discard someone who has been at our side when the environment was so difficult for us."

Few of the recall candidates bothered to directly court LGBTQ voters and largely ignored LGBTQ issues on the campaign trail. Newsom was ineligible to run as a recall candidate himself and was successful in blocking a high-profile Democrat from running as a possible fail-safe choice should the recall be successful.

Newsom also lucked out in having to run against a weak field of Republican opponents in the recall. Despite an early blitz of media coverage former Olympic gold medalist Caitlyn Jenner, who came out as a transgender woman several years ago, barely registered with voters.

She received just 1.1% of the ballots with the second question answered for 13th place after 100% of precincts reported their early returns. Former San Diego mayor Kevin Faulconer ran away from his LGBTQ-friendly record leading his Southern California city and made little effort to explain to Democrats why they should support him. He landed in third place with 8.6% of the count so far.

Republican businessman John Cox, who lost to Newsom in 2018 by 24 points, turned himself into a joke candidate with his stunt of using a live bear as a campaign prop and ending one widely aired commercial with a profane-laced question. He flopped in the recall with 4.4% of the vote count as of Wednesday morning.

As for the best known Democrat on the recall ballot, YouTube personality Kevin Paffrath barely registered with voters, receiving just shy of 500,000 votes for a share of 9.8% of those tallied as of early September 15.

This is a breaking news story that will be updated as returns come in.