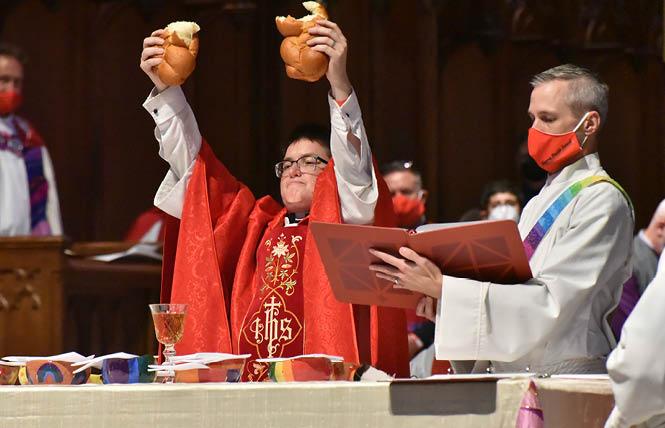 A longtime spiritual leader in San Francisco made history when they were installed as the first transgender bishop in the Evangelical Lutheran Church in America.

The Reverend Dr. Megan Rohrer is now officially the bishop of ELCA's Sierra Pacific Synod, which oversees nearly 200 congregations in Central and Northern California and Northern Nevada. Rohrer previously made history in 2014, when they were installed as pastor at Grace Lutheran Church in San Francisco as the first openly transgender person to lead a congregation in the denomination.

Security was tight on Saturday, September 11, at Grace Cathedral atop Nob Hill, where the installation took place. There was a police presence, and bomb-sniffing dogs went through the church before the ceremony began.

Other LGBTQ pastors were on hand to view the service and to wish Rohrer well, such as the Reverend Drew Stever, who identifies as queer and trans and serves as pastor at Hope Lutheran Church in Hollywood.

"I think in recent years the church has been on the cusp of a great turning, where the table that was originally set has been rebuilt to make more room," Stever, 29, told the Bay Area Reporter. "One thing that is often said is that we are standing on the shoulders of giants. I am excited for the history being made and the work that will continue to be done."

A brief news conference was held on the steps of Grace Cathedral at noon. ELCA presiding Bishop Elizabeth Eaton and the Reverend Marc Handley Andrus, bishop of the Episcopal Diocese of California, joined Rohrer.

"I am personally excited about Megan's being a bishop in the Evangelical Lutheran Church in America," Andrus said. "I've known them for many years. We've shared ministry together, and I've been impressed, along with my wife Sheila, by their commitment to justice at the ground level. They radiate joy and welcome. And that is, I think, their hallmark."

Andrus noted that the day was the 20th anniversary of the 9/11 terrorist attacks.

"Here at Grace Cathedral on that day, without planning, without anyone putting press out to say there was something happening here at Grace Cathedral, 5,000 people gathered from San Francisco and the area spontaneously to find a spiritual home," Andrus said. "To find a place where they could be accepted and be loved and find solidarity and community with each other. We need to continue that. We need to continue as one."

Eaton said Rohrer's installation was one of several in the denomination.

"This is the first of seven new bishops who will be installed," Eaton said. "You're the first of these people taking up this call and this ministry, as Bishop Andrus said, in this really difficult time. We believe in unity, but not in uniformity. God did not create us to be uniform. God did not make us to speak all the same languages, but we can all hear the good news. This is the witness that Bishop Rohrer brings not only to this part of God's vineyard, but to the rest of us in the Lutheran church and the Episcopal church, that in fact it's a beautiful thing to celebrate our diversity and in fact understand that we are one in Christ."

Rohrer, 41, received applause when they spoke.

"I think today is a humbling kind of a day," Rohrer said. "A day when you have a fancy party in the biggest church we can find, with the most flowers and the most fabulousness, and some of the loveliest people we can gather, not only those who will be worshipping with us here in person, but all over the globe, worshipping with us online. And I know that while much of the attention is about me, I always try, when I can, to step aside a second and remember the God who reminds me over and over again that there is nobody that isn't welcome in a church like this, that isn't welcome in God's community, that isn't a full and faithful part of the church."

Rohrer added that they felt it was a blessing to be part of the day's service.

"Because of the diversity of people who have put their hearts and souls into planning this service," they said. "And so a huge thank you to all who have been a part of today's service, from those who are wearing faithful uniforms to those who are wearing the patch of the city and county of San Francisco, and to all who will be joining us, I share my sincere gratitude."

Rohrer spoke to the B.A.R. about how they were feeling.

"It is a combination of joy and humbleness, and a little bit of wanting to remember to breathe like a bride at the beginning of a wedding," they said.

The bishop also spoke of how they would react to people who might object to them becoming bishop because of who they are.

"The good news is that God's love is bigger," Rohrer said. "And I think that the time that we have with each other will prove faithfulness exists even if it's unbelievable at first. I'm going to commit to continuing to pray with people and serve with them and live with them and maybe their minds will change or maybe they won't, but God's still gonna show up even if we can't figure out all the ways that we need to get along."

There were panels from the AIDS Memorial Quilt on display inside the church. At Rohrer's request one of the panels was for Joel Workin, a young man who died of AIDS in 1995. In 1989 Workin was one of three seminarians who were denied ordination after coming out to their candidacy committees. But he went on to write and to inspire others, according to Joan Juster, who served on the installation committee. When he died, Workin's family created a scholarship foundation to fund LGBTQ people who want to have a life in the church. There was also a small table inside the church's AIDS memorial chapel that featured a photo of Workin and the story of his life and what he had accomplished.

Press was not allowed to attend the installation ceremony, but a livestream was made available. In accordance with COVID-19 safety protocols, masks were worn. Rohrer received a standing ovation when they were introduced as bishop for the first time. They began their speech by reciting a portion of Maya Angelou's poem "Still I Rise."

"When they write me down in history with their bitter twisted lies, trod me down in the very dirt, but still like dust, I rise," Rohrer said. "We are gathered here in a historic place in historic times, not the first to do a hard thing. As we live through all the hard things, but we rise."

A trans woman who attended the event said that she was moved by the historic nature of Rohrer's installation.

"These are moments I never dreamed of," said Vica Steel, 56, speaking outside Grace Cathedral before the ceremony. Steel said that she was just starting seminary, inspired by Rohrer.

"I've only heard words of faith twisted into weapons of exclusion," she said. "But with the leadership of Bishop Rohrer and so many others I have a path, still bumpy, that I can follow to faith leadership."

Out in the Bay: Meet the US's first out transgender bishop
Sign up!