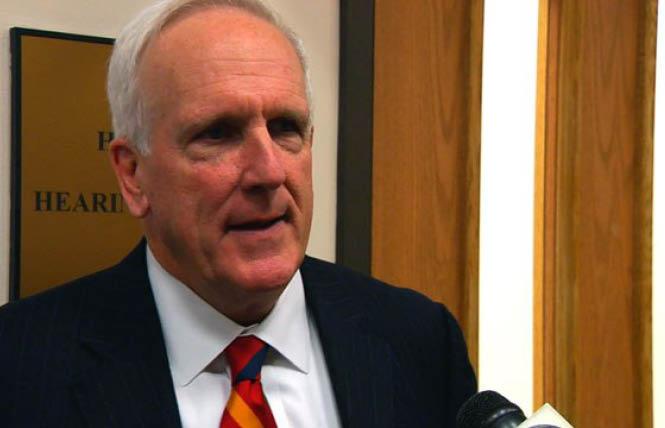 LGBTQ legal advocacy groups are sounding the alarm after 20 conservative or conservative-leaning states sued the Biden administration for executive actions intended to combat discrimination on the basis of sexual orientation and gender identity.

The suit, led by Tennessee Attorney General Herbert Slatery (R), was filed August 30 in the United States District Court for the Eastern District of Tennessee. It specifically challenges legal interpretations by the Equal Employment Opportunity Commission and the Department of Education.

As the Bay Area Reporter reported in June, the education department made a decision to interpret the Civil Rights Act's Title IX as protecting students from discrimination on the basis of their sexual orientation or gender identity. It had been the latest of executive branch agencies to do so after Biden's Inauguration Day executive order implementing the U.S. Supreme Court's 2020 ruling in Bostock v. Clayton County, which stated that sexual orientation and gender identity fall under Title VII of the Civil Rights Act's ban on discrimination on the basis of "sex."

In the lawsuit, the 20 state attorneys general claim that the EEOC and education department's interpretations go far beyond what would be required changes to implement the Bostock decision.

Specifically, the plaintiffs want a ruling as to whether Title VII and Title IX prohibit the use of "biological sex" to separate sports teams, dress codes, showers, locker rooms, and bathrooms and as to whether they require people use a transgender person's preferred pronouns.

"This recent guidance from the Department and the EEOC concerns issues of enormous importance to the states, employers, educational institutions, employees, students, and other individual citizens," the complaint states. "The guidance purports to resolve highly controversial and localized issues such as whether employers and schools may maintain sex-separated showers and locker rooms, whether schools must allow biological males to compete on female athletic teams, and whether individuals may be compelled to use another person's preferred pronouns.

"But the agencies have no authority to resolve those sensitive questions, let alone to do so by executive fiat without providing any opportunity for public participation," it continues.

Paul D. Castillo, counsel and students' rights strategist for the Lambda Legal Defense and Education Fund, told the B.A.R. that the suit is an attack on the trans community.

"This lawsuit is yet another attempt to erase transgender people from the public sphere," Castillo stated. "Transgender students have been attacked in many state legislative houses across the country and now these same actors endeavor to waste taxpayer money in a lawsuit aimed at denying such students full participation in equal educational opportunities. The filing has nothing to do with procedure or addressing any real evidence-based problems that school officials and employers are facing. The state actors are picking on marginalized children and workers who are providing for their families simply because they are transgender."

Castillo stated that he's confident the suit will fail.

"Agencies within the federal government regularly issue guidance about their interpretation of the laws they are charged with enforcing," Castillo stated. "It is well within their authority to provide information and offer technical assistance about the already existing law as it applies to transgender people in the workplace and in schools. Courts have consistently vindicated the civil rights of transgender people and the outcome here should be no different."

Shannon Minter, a trans man who is the legal director of the San Francisco-based National Center for Lesbian Rights, stated that it was dispiriting that so many states joined the suit.

"This case poses a serious threat to transgender people," Minter stated. "Twenty states — nearly half the country — have banded together to ask the federal courts to prevent the Biden administration from enforcing basic equality protections for transgender people and to hold that federal law does not protect transgender people in workplaces and schools."

"This should be a wakeup call for every LGBTQ person in this country that we urgently need Congress to enact a federal law that expressly protects our community," Minter stated. "Every day that goes by without forward movement on that front is a day that the threat to transgender people, in particular, grows. We are used to seeing continuous forward progress, but we must realize that we are in a new world now."

Minter pointed out the suit is part of the legacy of former President Donald Trump.

"The federal courts are packed with Trump-appointed judges, more than half the states are dominated by extreme anti-LGBTQ legislators and officials, and we are seeing unprecedented resources being put into legislation and court cases attacking LGBTQ people," Minter concluded. "We need to mobilize as we have never done before to enact federal protections."