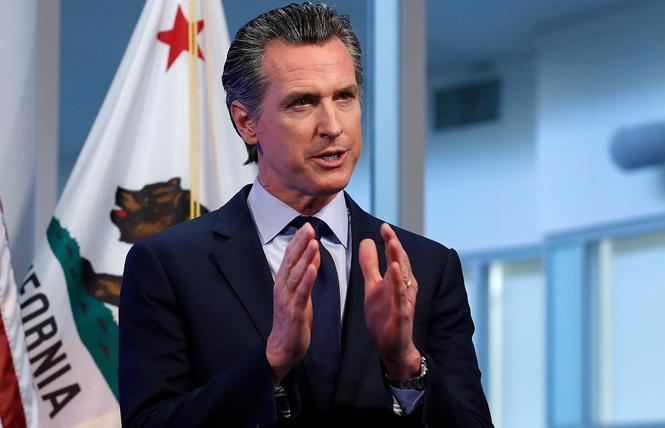 In the final days of their 2021 legislative session, California lawmakers approved a bevy of legislation addressing various sexual orientation and gender identity concerns from the mailbox and coroner's office to the toy store aisle. It is now up to Governor Gavin Newsom to sign them into law or veto the bills.

One of the bills, Assembly Bill 1184, aims to protect the privacy rights of people receiving sensitive health care services, such as gender-affirming care. It is one of two trans rights bills Assemblyman David Chiu (D-San Francisco) carried this year.

His AB 245 prohibiting public universities from deadnaming trans and nonbinary students — that is using their former names they were given based on the sex they were assigned at birth — on their diplomas and academic records is also waiting for Newsom's signature. It was sent to the governor's desk September 2, kicking off the 12-day deadline for him to sign it.

Sponsored by Planned Parenthood, AB 1184 prohibits health care providers from disclosing services a patient receives under an insurance policy held by another person, such as a parent or spouse. Thus, a youth receiving transgender health care under their parent's policy can request their health provider not inform them their child is receiving such care.

The legislation establishes automatic confidentiality by putting that burden on health insurance companies rather than patients, as Chiu explained in a June guest opinion piece for the Bay Area Reporter. In addition to gender-affirming care, behavioral health care and substance use care are also covered by the legislation, noted Chiu. The Senate passed AB 1184 on a 29-8 vote with three members abstaining September 8 and the Assembly approved the amended bill September 9 on a 61-14 vote with five members not voting.

AB 218 allows Californians to update their marriage certificates and the birth certificates of their children to accurately reflect their legal name and gender in a manner that protects their privacy. Gay freshman Assemblyman Chris Ward (D-San Diego) revived the legislation after Newsom vetoed similar legislation last fall due to concerns it would inadvertently out transgender and nonbinary individuals.

It passed out of the Senate September 8 on a 29-9 vote with two abstentions, and the Assembly approved the amended bill September 9 on a 60-13 vote with seven members not voting.

"LGBTQ Californians deserve to know their privacy is respected and secure when dealing with any institution," tweeted Ward, who urged Newsom to sign the revised bill this year.

AB 1094, authored by Assemblyman Dr. Joaquin Arambula (D-Fresno), enhances the collection of public health data about violent deaths, including homicide and suicide, so that it includes stats related to the LGBTQ+ community. The Senate approved it 39-0 with one abstention September 1, and the Assembly passed the amended version the next day on a 71-0 vote with eight members not voting.

It passed out of the Assembly on a 72-0 vote with seven abstentions September 1 after the Senate approved an amended version 31-1 with eight members not voting on August 30. The bill was sent to Newsom's desk September 8, while those passed in recent days should be presented to the governor in the coming days.

The last remaining LGBTQ-related bill to pass was Senate Bill 357, the Safer Streets for All Act co-authored by gay state Senator Scott Wiener (D-San Francisco) and Assemblyman Ash Kalra (D-San Jose). It will repeal California Penal Code Section 653.22, the law that criminalizes loitering for the intent to engage in sex work. It also allows those convicted of loitering with the intent to commit prostitution, particularly the Black women and transgender individuals often targeted under the law, to seal their records.

It passed out of the Senate June 6 on a 29-9 vote with two abstentions and survived several committee votes in the Assembly. Friday, September 10, it cleared the lower chamber on a 41-26 vote.

Noting that the crime has largely targeted Black women, especially those who are transgender, Assemblyman Isaac Bryan (D-Baldwin Hills) implored his colleagues to pass SB 357.

"We made a mistake and we need to roll it back," he said of the loitering section in the penal code.

Assemblywoman Rebecca Bauer-Kahan (D-Orinda) stressed that SB 357 only applies to people over the age of 18 and also passionately argued for its passage.

"We all want to end human trafficking," she said, but noted "the LGBT community is not safer with this law on the books. As a long-time ally of the LGBTQ community, I am proud to stand for this bill today."

Family leave bill shelved for now
One LGBTQ-related bill was shelved Thursday at the request of its author, Assemblywoman Buffy Wicks (D-Oakland), and will be revived in January for the 2022 legislative session. AB 1041 aimed to expand the definition of "family member" for purposes of family and sick leave to allow covered workers to take time off to care for someone designated by the employee at the time of the request.

The bill takes into account LGBTQ people's chosen family members who aren't biologically or legally related and other household units that don't abide by a "nuclear family" model so that such individuals can get time off to provide health care and other assistance to their loved ones. Among its co-authors were Ward and Wiener, who requested it be moved to the inactive file as it had been pending in the Senate.

The San Francisco LGBTQ-focused nonprofit Our Family Coalition had urged its supporters to contact their state lawmakers and ask them to support AB 1041 since it ensures California's "leave laws extend to a worker's chosen or extended family — and for LGBTQ folk, that is often the primary family we have."

In a September 9 tweet Wicks wrote that she was making the bill, known as the Chosen Family Act, "a 2-yr bill to give us more time to work w/the Gov's office & key stakeholders for the strongest possible policy. We're committed to honoring the full intent of the bill: ensuring our leave policies reflect modern family relationships."

Erin Ivie, a spokeswoman for Wicks, told the B.A.R. Friday that backers of the bill need more time to fine-tune the definition of who qualifies as chosen family. She added that the Assemblywoman does intend to continue pushing the bill at the beginning of next session.

"All are committed to honoring the full intent of the bill, which is to ensure our leave policies reflect modern family relationships," wrote Ivie in an emailed reply.

SB 283, authored by Senator Lena A. Gonzalez (D-Long Beach), strengthens the Equal Insurance HIV Act of 2020. It imposes a prohibition as of January 1, 2023 on a life or disability insurance insurer from considering an applicant's occupation in determining whether to require an HIV test.