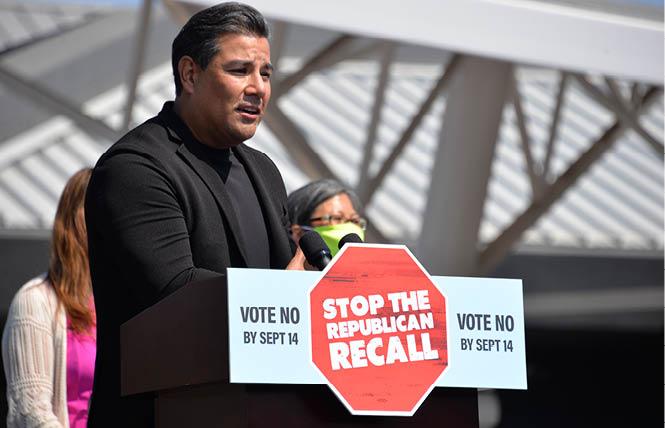 California Insurance Commissioner Ricardo Lara, the only out gay statewide elected official, spoke against the recall of Governor Gavin Newsom at the September 8 rally in San Leandro. Photo: Bill Wilson

Should Governor Gavin Newsom beat back the attempt to recall him Tuesday, he will have LGBTQ Californians to thank. Over the last week LGBTQ leaders and groups across the state, as well as nationally, have rallied the queer community and its allies to help torpedo the Republican-led effort to cut short the Democratic leader's time in office.

The latest to do so will be Long Beach's gay mayor, Robert Garcia, who will roll out the welcome mat in his coastal Southern California city today (Monday, September 13), for both Newsom and President Joe Biden. The latest national Democratic Party leader to lend his political star power toward defeating the recall, Biden will take the stage with Newsom five days after Vice President Kamala Harris was in the Bay Area to stump on behalf of the governor.

An up-and-coming star within his party, Garcia has long been a vocal backer of both the governor and president. Hitting on a message that appears to be assisting Newsom in drawing wide support for keeping him in office, according to multiple polls in recent days, Garcia pointed to both men's leadership during the COVID-19 pandemic in a tweet last week after it was announced that Biden's long expected campaign rally to boost Newsom's chances would be held in his hometown.

"You can be sure that when President @JoeBiden visits on Monday, I am going to thank him and the Governor for their steadfast support in taking on this pandemic. Long Beach is a national model on vaccine distribution and public health," wrote Garcia, who lost his mother and stepfather to COVID last year just weeks apart.

Garcia is just the latest gay Latino official to assist Newsom in reaching both LGBTQ and Latino voters ahead of the September 14 recall election. Taking to the stage at Newsom's rally last Wednesday, September 8, with Harris in San Leandro was Insurance Commissioner Ricardo Lara, the first openly gay person ever elected to statewide office.

Speaking in both English and Spanish Lara beseeched voters to cast a ballot against the recall in order to protect the prosperity the Golden State has seen under Newsom's gubernatorial leadership during the first three years of his inaugural four-year term. If Newsom does defeat the recall attempt against him, he will need to seek a second term next year.

"No one has done more for working families than our governor," proclaimed Lara. "If you don't believe me and want to see the receipts look at our state budget."

Among the 40-plus people who qualified to run as a replacement candidate for Newsom on the recall ballot, few have bothered to directly court LGBTQ voters and have largely ignored LGBTQ issues on the campaign trail. Newsom, who is ineligible to run as a recall candidate himself, ramped up his courting of LGBTQ voters this month.

He held an online call with LGBTQ leaders from across the state the Friday of Labor Day weekend and has invited various out politicians to speak at his campaign events over the last week. Others have made a point to reference his being an early supporter of marriage equality, noting Newsom's going so far as to ignore California law in 2004 when he was mayor of San Francisco and ordered city officials to wed same-sex couples.

Newsom has continued to be on the forefront of numerous LGBTQ issues since moving up to Sacramento, from signing first-of-its-kind legislation addressing transgender issues to naming the first openly gay justice to the California Supreme Court. It is why Newsom can draw on such deep support within the Golden State's LGBTQ community to assist him in defeating the recall.

"Gavin Newsom has been a staunch supporter of the LGBTQ+ community for a long time. Recalling him and replacing him with any of the replacement candidates would be tragic for our community and for all Californians," noted the board of the Bay Area Municipal Elections Committee, the South Bay's LGBTQ political group, in an email to its members Wednesday, September 8.

Equality California, the statewide LGBTQ advocacy organization, has marshaled its resources in recent days to focus LGBTQ Californians' attention on the recall election. It paid for an online voter education campaign, including via the Bay Area Reporter, to explain how the recall ballot works and made the election the focus of its Power Hour roundtable discussion September 9 that aired live over Facebook.

It has engaged in other get-out-the-vote efforts to boost LGBTQ participation in the special election in which every registered voter was mailed a ballot to fill out and return to their local elections department. EQCA's efforts are aimed at countering the hopes of the recall opponents that voter turnout will be low, thus giving them an edge in a state where registered Democratic voters far outnumber that of registered Republicans.

"Equality California was the second organization, behind the CA Democratic Party, to endorse a NO vote on the recall. Just last week, at a virtual rally with LGBTQ+ leaders across the state, I shared why this decision was a no-brainer for our organization," noted outgoing EQCA Executive Director Rick Chavez Zbur in a recent email encouraging the organization's supporters to cast their recall ballots. "Governor Newsom has always stood in solidarity with the LGBTQ+ community, trailblazing first-of-its-kind legislation to protect and empower all LGBTQ+ people in California. It's time for us to stand by him."


At EQCA's San Francisco Equality Awards event September 10 at the Academy of Sciences, Executive Director-designate Tony Hoang told the B.A.R. that LGBTQs make up 12% of the state's voting population.

"We want to make sure they turn out Tuesday," Hoang said, adding he is "cautiously optimistic" that Newsom will beat back the recall.

State Attorney General Rob Bonta, who, along with the B.A.R. was honored by EQCA at the event, was more bullish.

"I think we're going to win," he said, adding that he thinks Democrats have overcome their complacency that was reflected in previous polling that saw Newsom narrowly defeating the recall effort.

National LGBTQ rights group the Human Rights Campaign has also shined a spotlight on the need to defeat the recall against Newsom. It comes even amid HRC's board firing Alphonso David as its president last week due to actions he took related to his old boss, disgraced former New York governor Andrew Cuomo who resigned following a state report into his handling of sexual harassment allegations made against him by a number of women.

"HRC is encouraging our members and all Californians to vote no on recall and return ballots by September 14th. We stand with Equality California and the long list of California elected leaders and LGBTQ+ champions who have opposed the effort to recall Governor Gavin Newsom," wrote Cooper Reed, HRC's associate regional campaign director, in a September 8 email.

Like EQCA, HRC asked its members to take part in phone banking efforts to educate voters in California about the recall and why they should reject it. Gay state Senator Scott Wiener (D-San Francisco) also urged his supporters to join him September 12 for a phone banking session he jointly hosted in collaboration with the state Legislature's Senate Democratic Caucus and the California Democratic Party.

Noting the recall election "is a HUGE deal for California's future," Wiener's campaign urged his backers not "to sit back while the extreme right tries to take out our Governor and replace him with a Trump/DeSantis Governor. No thank you," referring to former President Donald Trump and Florida Governor Ron DeSantis, who both have faced harsh criticism for their handling of the COVID-19 pandemic.

LGBTQ candidates pitch in
Several out candidates seeking state legislative seats next year have piggybacked off the recall election to raise funds for their own campaigns. Gay Chula Vista City Councilman Steve Padilla, a Democrat and former police detective running for the open 40th Senate District seat in 2022, has been splitting donations between his Senate campaign and Newsom received in recent days.

And he has raised the prospect of seeing conservative radio host Larry Elder, the leading Republican to succeed Newsom in polls about the recall race, become governor to drive people not only to donate but also to reject the recall.

Should "the extremist frontrunner, Larry Elder," win the recall election then what is at stake, noted Padilla in a recent email to his supporters, is "ONE: Larry Elder does not support masks in schools. TWO: Larry Elder does not believe in a minimum wage. THREE: vaccine mandates for healthcare and school workers will be eliminated."

He added that, "Our health. Our financial stability. Our community are all at risk with Larry Elder. I am proud to stand with our governor and know he is the only person to lead our state forward at this critical time." 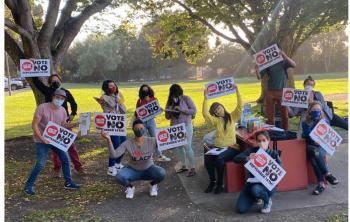 Nurse Jennifer Esteen, a gay, masculine of center woman, seeking the East Bay's 20th Assembly District seat next year, has also fundraised off the Newsom recall. A recent pitch from her campaign asked people to donate toward its "organizing efforts to get out the vote against the recall."

Esteen, a former psychiatric nurse in the San Francisco General Hospital Psychiatric Emergency Room who is now vice president of organizing for Service Employees International Union Local 1021, told the B.A.R. that with her election still months away, she has been out campaigning against the recall attempt in recent weeks in various parts of the Assembly District centered around Fremont and Castro Valley.

"We have been out canvassing in the district in the unincorporated areas every Tuesday and Saturday to prevent this recall from happening," said Esteen, who has three children with her wife and would be the first LGBTQ Black member of the state Legislature if elected. "What we are trying to do is make sure people are aware."