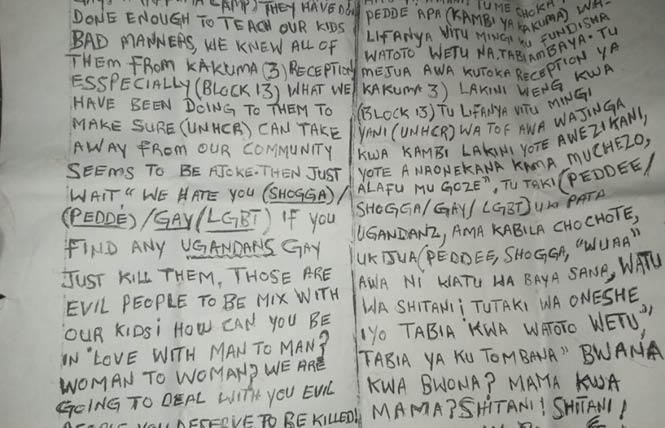 A photo of a threatening letter that was tossed into Block 13, the LGBTQ compound, at Kakuma Refugee Camp in Kenya. Photo: Courtesy Wavamuno Benon

LGBTQ refugees in the infamous Block 13 at Kakuma Refugee Camp in Kenya suspect yet another arson fire was set at the facility last month and threatening letters have added to their stress.

Some queer refugees awoke to what sounded like a gunshot early in the morning of August 16. After surveying their compound, they found "petrol had been poured and spread around the few shelters," Block 13 LGBTQ refugees told Victor Mukasa, a U.S.-based gay former Ugandan refugee and international human rights defender. Mukasa now advocates for his fellow LGBTQ refugee activists from across the world and as founder and host of "The Victor Mukasa Show."

Mukasa relayed details of the incident during a virtual news conference August 18 hosted by the Black LGBTQ+ Migrant Project, a program of the Oakland-based Transgender Law Center.

The LGBTQ refugees at Block 13 left the scene as it was to preserve the evidence and called the police, Mukasa said. But authorities never came.

It was the fourth arson attack on the LGBTQ compound at Kakuma this year, according to a document recording incidents at Block 13 and homophobic attacks against the block's residents provided by BLMP.

In March, a firebomb killed one refugee and hospitalized another. Kakuma Refugee Camp is home to more than 600 LGBTQ refugees, according to Gilbert Kagarura, a gay Ugandan refugee activist and Block 13's lead spokesperson. Kagarura escaped Kakuma earlier this year and is currently in hiding.

The attacks on Block 13, reportedly by other refugees, have increased as the queer refugees have become more vocal within the past five years. LGBTQ refugees accuse the United Nations High Commissioner for Refugees and Kenyan police of turning a blind eye to the attacks.

Eujin Byun, communications officer for UNHCR, wrote in a statement to the B.A.R. that the agency could not comment on an ongoing investigation.

"We will continue to closely follow the progress of these efforts taken by local and central authorities," wrote Byun. "If the investigation shows that any criminal activity was a factor in the fire, those responsible must be identified and held to account in accordance with Kenya national law."

The B.A.R. requested comment from Kenya's Police Services but did not receive a response by press time.

Turning up the heat
A coalition of LGBTQ Africans in the United States and Africa are turning up the pressure on UNHCR, calling on it to immediately evacuate and relocate Kakuma's LGBTQ refugees.

"It is the responsibility of the United States to pressure the UNHCR to expedite the settlement of these folks to a third country," BLMP Co-Director Ola Osaze said during the news conference.

One of the many challenges of expediting resettlement of hundreds of LGBTQ refugees is that passes have long expired for more than 187 of them, Wavamuno Benon, a gay Ugandan refugee and activist formerly from Block 13, told the B.A.R. in July. Benon escaped Kakuma and is in hiding.

Fire, arrest, and intimidation
The activists' demands came on the heels of the August arson attack. The next day Kenyan authorities arrested five LGBTQ activists at Block 13, accusing four of them for arson and the fifth for providing a false statement, Kagarura said. The charges have since been dropped and the activists released, he added.

UNHCR could not comment on the arrests, Byun wrote.

"This is a really sad and enraging circumstances," said Osaze, a U.S.-based queer and trans Nigerian migrant. "These experiences are very familiar to me from a first-hand perspective."

A refugee who identified herself only as Julia spoke from Block 13 during the news conference. "We are in fear. We are devastated right now. We are being threatened again," she said.

Under attack
According to the Black migrant advocacy groups, LGBTQ refugees at Block 13 have recorded more than 40 incidents in 2020-21. The incidents included death threats, two mob attacks, more than a dozen verbal and physical assaults, rapes, intimidation, and arbitrary arrests.

Arson and fire-bomb attacks at the camp doubled in the past year. To date, the block reported four fire attacks in 2021, up from two in 2020.

Gay Ugandan refugee activist Chriton "Trinidad" Atuhwera died in April from injuries he sustained in a March firebomb attack. He had been treated at Kenyatta National Hospital in Nairobi, Kenya's capital.

Jordan Ayesigye, another gay Ugandan refugee activist, sustained severe burn wounds in the same attack. He was hospitalized at Kenyatta, but moved himself against medical professionals' advice to a private hospital after it was discovered he was gay, Kagarura said. Ayesigye, who later contracted COVID-19, is still recovering.

BLMP launched a Go Fund Me campaign to pay Ayesigye's hospital bill that has raised $3,419 as of September 7.

UNHCR's Byun explained in the statement, "We face limitations to support individuals who voluntarily choose to pursue other options against the medical advice from the Kenyatta National Hospital."

A community of LGBTQ refugees and allies are waiting to help Ayesigye recover once he is released from the hospital, said Osaze.

Intensifying attacks
While reported attacks on Block 13's LGBTQ refugees have dropped in 2021, the severity appears to be intensifying, according to records provided by the coalition.

The document detailing the 33 incidents in 2020 showed that there were two fire-bombings at Block 13, two mob attacks, seven physical attacks, including one gang rape and two rapes, 14 assaults, three death threats, and two arbitrary arrests. There was also the tear-gassing of protesters outside Kakuma's UNHCR office in May 2020.

Nalugwa described the attacks on Block 13 as a "continuous situation" since 2014 when Uganda passed and struck down the "Jail the Gays" bill.

The attacks have been "ongoing for seven years," she said. "Lives have been lost."

At one point in 2018, the attacks on Block 13 were so bad a group fled to Nairobi and obtained UNHCR's support in a safe house until they were returned to Kakuma at the end of that year.

After an arson attack in March, Benon, Nalugwa, and Kagarura went into hiding after fleeing the camp due to officials' interrogations and threats against them.

"We don't know what is coming next," Benon told the B.A.R. during a video interview in July. He has moved a couple of times since escaping from Kakuma due to threats he's received on his mobile phone. "I shifted to another place, then they sent me another message."

Benon said the messages are coming from within UNHCR.

"It is only the UNHCR that knows that number. No one else knows it," he said.

Byun responded to the B.A.R.'s questions about threats coming from within the UNHCR to LGBTQ refugee activists. She wrote in the statement that the "UNHCR encourages anyone facing security issues to report to the police immediately and UNHCR for any protection and legal assistance."

The activists claim they report all incidents to Kenyan police and the UNHCR, but nothing has been done to protect them.

Kagarura said he has emailed the UNHCR as well as informed his caseworker with the agency about the threats he has received. He said that he has not received a response.

Advocates said the UNHCR has relatively been silent about the LGBTQ refugee issue more recently.

"The UNHCR is trying to cover it up to show that everything is okay, but this is a situation that has been going on with the lives of LGBTQ people," at Kakuma, said Nalugwa.

Benon and Kagarura echoed her accusations.

"The defenders report that they are threatened if they do not remain silent," Mukasa said.

"The situation tends to continue to be so hurtful as LGBT people," Nalugwa added. "The UNHCR is not played its part to protect us when it's the one who welcomed us here."

When asked about seeking assistance from non-governmental organizations, such as the Organization for Refuge, Asylum and Migration, the activists dismissed the organization, pointing out that ORAM worked closely with UNHCR.

"It is just a joke," Kagarura said, suggesting that the leaders of non-governmental organizations and UNHCR are in a club with each other. "Our human rights system ... is more of a political institution than a humanitarian institution."

ORAM works on behalf of LGBTQ asylum seekers and refugees at Kakuma and in other places in the world. The organization is currently examining Kakuma's LGBTQ community and issues for a forthcoming report.

ORAM Executive Director Steve Roth said the agency does not work for UNHCR or Kenya's government as the activists claimed.

"It would be a mistake to not engage with all of these different organizations as we are trying to effect change and improve the safety and well-being of LGBTQI refugees in Kakuma," Roth said.

Disagreement
Not all LGBTQ refugees agree with Block 13 activists' vocal demands on UNHCR.

In 2019, Joel, a gay Ugandan refugee who used a pseudonym, told Bombastic magazine that the protesters are misled by their own assumptions and "other refugees" who have been in the system for a long time that the UNHCR will provide help "in terms of housing, health, and safety."

"Applying that kind of pressure only sheds bad light on the entire LGBT community from Uganda. This could be handled in a more diplomatic way," he said, advising that LGBTQ refugees in Kenya would be better off planning "how to do things the proper way."

Kagarura said that there are a few LGBTQ refugees who have successfully blended into Kakuma's population. They remain closeted, not only because of their sexual orientation, but also because they are Ugandan. Ugandan nationality has been equated with LGBTQ at Kakuma, he said.

Byun said that UNHCR made several attempts to "facilitate true peaceful co-existence" as well as to promote a supportive and tolerant community among Kakuma's diverse refugee community through dialogue.

"Unfortunately, these efforts have only been partially successful," wrote Byun, "as a small group of refugees with an LGBTIQ+ profile residing in Block 13 have continued to refuse to take part in these community dialogues.

"However, we remain engaged with the group and focused on jointly identifying solutions," she added.

Mtetwa called upon the U.N., the African Commission for Peoples and Human Rights, African nations, and human rights advocates "not to throw a blind eye" to what is happening to LGBTQ people in Kakuma.

"We will continue to press upon those responsible for the camp," she said. "To ensure that actually the lives of the peoples are protected, and that evacuation is made as soon as possible."