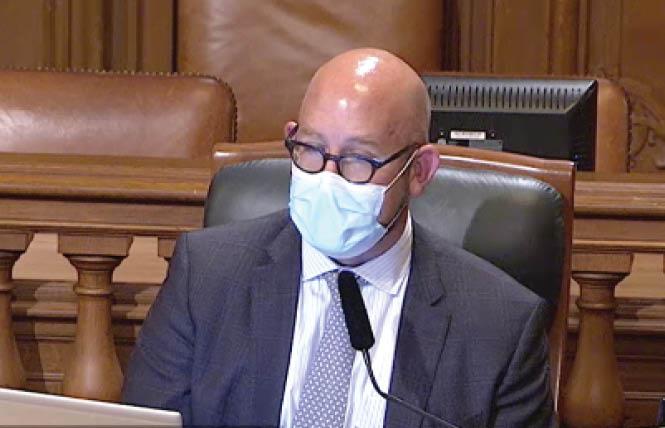 Gay District 8 Supervisor Rafael Mandelman is asking his colleagues on the San Francisco Board of Supervisors to join him in calling on California's highest state court to protect the rights of LGBTQ seniors, particularly those who are transgender or nonbinary. It comes amid a legal battle over requiring employees at senior care facilities to address residents by their preferred names and pronouns.

At the board's first meeting September 7 following its summer recess, Mandelman introduced a resolution calling on the California Supreme Court to reverse a lower court ruling that struck down part of the state's LGBTQ Senior Bill of Rights as unconstitutional. It is expected to be passed by the supervisors at their meeting next Tuesday.

State Attorney General Rob Bonta, a straight ally, filed a similar petition of review with the state's highest court last month, as the Bay Area Reporter previously reported. That came after certain anti-discrimination protections were struck down by a three-judge panel of the 3rd District California Court of Appeal in Sacramento.

In the case of Taking Offense v. California, the panel came to a unanimous decision that these protections — which had required long-term care staff to refer to facility residents by their preferred names and pronouns — imperiled freedom of speech and the free exercise of religion.

"I'm grateful to Supervisor Mandelman for taking this step," Wiener stated to the B.A.R. "The Court of Appeal decision striking down part of SB 219 was horrific and needs to be corrected on appeal."

The appellate court panel "failed to acknowledge the serious harm caused by the intentional misuse of transgender people's names and pronouns," the resolution states, concluding with the instruction that if passed by the board the clerk should transmit a copy to the state Supreme Court.

In his remarks to the board, Mandelman explained the importance of the LGBTQ Senior Bill of Rights as a bulwark against discrimination — and how San Francisco has led on the issue in the past.

"Though California has sought to protect the rights and dignity of its LGBTQ senior population, prior to SB 219 the state had not detailed specific actions deemed discriminatory or made residents fully aware of their rights in order to hold long-term care facilities more accountable," Mandelman said. "San Francisco, as is so often the case, led the way on this issue at the local level. In 2015 the Board of Supervisors passed an ordinance by then-Supervisors Wiener and [David] Campos prohibiting discrimination against residents or patients at long-term care facilities in San Francisco on the basis of sexual orientation or gender identity. The ordinance also provided aggrieved persons with the right to seek investigation and mediation by the Human Rights Commission, as well as a private right of action."

Mandelman — who represents the LGBTQ Castro neighborhood on the board — simply called the appellate court's decision "wrong."

"The appellate court treated this provision of the law — which prohibits singling out LGBTQ people for unequal treatment — as a regulation of protected speech, rather than conduct," Mandelman said. "The court was wrong. And in prohibiting the state from protecting LGBTQ seniors from intentional misgendering, the court failed to acknowledge the serious harm caused by the intentional misuse of transgender people's names and pronouns."

The resolution will be voted upon next week.