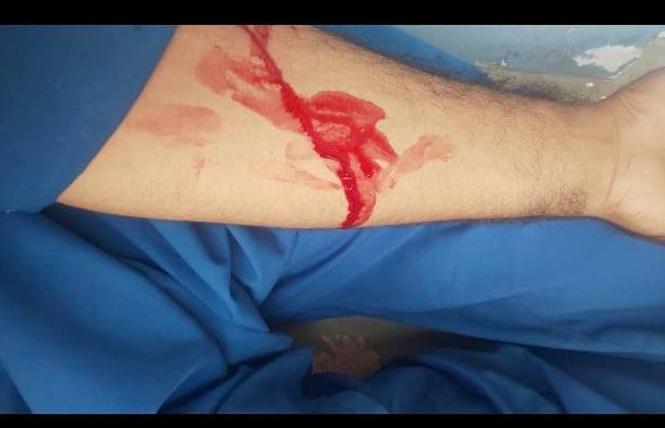 Gay Afghan Ahmadullah, who uses a pseudonym for safety reasons, said that he was wounded escaping from a Taliban soldier on August 23, 2021. Photo: Courtesy Nemat Sadat

The United States left behind approximately 1,000 LGBTQ Afghans with the Taliban when the last evacuation flight departed Kabul's Hamid Karzai International Airport August 30. They are afraid, hiding, and running out of food and water, advocates said.

Taliban soldiers were hunting queer Afghans down and killing them before the U.S. withdrew from Afghanistan, some LGBTQ Afghans said, speaking anonymously to the Bay Area Reporter late August 29. (The three people quoted below have used their pseudonyms with other media outlets for safety reasons and were connected to the B.A.R. by gay Afghan author and activist Nemat Sadat.)

"If they find out you are gay, they will just kill you right on the spot," said Ahmadullah, who was on the run and hiding from the Taliban. The Taliban already killed his father, younger brother, and boyfriend, he said.

"[The Taliban] killed my boyfriend on the first day they captured Kabul city," he said.

The two men were having breakfast when they heard the Taliban were entering the city on August 15. That was the last time he saw his boyfriend. They both went to their homes. His boyfriend was supposed to call him, but he never heard from him again.

About six hours later, a friend "called me, 'Hey, they killed your best friend,'" Ahmadullah said.

His friend described his boyfriend's fate.

"They took him out of his home. Then they beat him. Then they beheaded him and cut him into pieces," Ahmadullah said he was told. Then the Taliban said to the people nearby, "This is what you do to gay people."

Ahmadullah, who has messaged this reporter daily, has been on the run ever since. He said that he escaped an attack by a Taliban soldier where he suffered stab wounds that are now getting infected. He is starting to lose hope that he will get out of Afghanistan alive.

Like other LGBTQ Afghans, Ahmadullah tried to get to the airport in Kabul to be evacuated but he was unsuccessful.

Ahmadullah's story echoed others whose friends and lovers were beaten by members of the Taliban or killed after the Taliban captured Kabul, Afghanistan's capital. Sadat said that he has been working around the clock since the middle of August to evacuate 325 LGBTQ Afghans. He said that he has been met with one roadblock after another. He is working to share their stories to garner support for their evacuation.

Rabia, a lesbian who declined to disclose any personal details about herself out of fear that the Taliban can use them to hunt her and her family down, is scared, but she is still hopeful that she will get out of the country.

"I [am] afraid because I'm woman, and beside[s] I'm lesbian. [The] risk for me is too much. Taliban has exact information about everyone's house in here. They will start searching the houses soon," she wrote.

Faraz, a gay man said, "If we are not evacuated by these two big nations [the U.S. and the United Kingdom] in these next few days we will be caught in the hand of the Taliban, and they will kill us [and] our family as well."

Biden administration assurances
President Joe Biden and Secretary of State Antony Blinken addressed the nation separately August 30. They said the withdrawal was necessary and pledged to continue evacuation efforts for the remaining Americans, estimated to be under 200, and safe passage for Afghans wishing to leave the country.

A State Department spokesperson wrote in a statement to the B.A.R. that the Taliban assured that all foreigners and Afghan citizens with "travel authorization" from other countries will be able to safely access points of departure and travel outside of Afghanistan.

"That commitment does not have an expiration date attached to it," the spokesperson added.

"We continue to press the Taliban through all available channels to live up to their commitment of safe passage. The world has spoken with one voice regarding this imperative," the spokesperson stated, referring to the United Nations Security Council resolution passed August 30. The resolution outlined the international community's expectations for the Taliban "to deliver on moving forward, notably freedom of travel," Biden said in a statement Monday night.

"The United States' commitment to at-risk Afghans is enduring," the State Department spokesperson stated. "We will continue to support at-risk Afghans, including, but not limited to, LGBTQI+ individuals, women, children, persons with disabilities, and members of ethnic and religious minority groups and other extremely at-risk populations in as many ways as we can, including through humanitarian assistance in partnership with the international community."

LGBTQ Afghans feel abandoned and punished by the U.S., and they are upset, said Sadat, who is himself frustrated after he said that he was questioned and then hung up on by staffers of his congressman, Scott Peters (D-California), who represents the San Diego area. Sadat said that he called Peters' office seeking help to process paperwork for the 325 LGBTQ Afghans he's working to get out of Afghanistan.

"That statement is false," wrote Polaski. "Our office has had multiple communications with Mr. Sadat and have worked with him to ensure that nearly 100 names were added to the State Dept. list for requested evacuation. We know how worried people are about people who are threatened in Afghanistan, are doing everything we can as a congressional office to assist, and wish Mr. Sadat the very best."

Sadat became the first Afghan to publicly come out as gay and ex-Muslim in 2013. During his time in Washington, D.C., Sadat said he asked Randy Berry, the former U.S. special envoy for the Human Rights of LGBTI Persons, and gay ambassadors at a 2016 LGBTQ Victory Institute event what the American government can do to help queer Afghans.

According to the video, Berry responded, in part, "in places where space for conversations is modest, we're going to take modest conversations to begin with."

Ultimately, Berry said, the goal is to create "greater space for civil society, greater safety, and that is not going to occur simply because we wish it to be so — even though we do."

Spearheaded by gay Congressman Chris Pappas (D-New Hampshire) and signed by 64 members of Congress, the signatories pointed out the U.S.'s lack of publicly announcing prioritizing the evacuation of LGBTQ Afghans, unlike Canada, reported the Washington Blade. Canada is so far the only country to specifically emphasize protecting LGBTQ+ individuals, along with other vulnerable groups targeted by the Taliban, in its efforts to resettle more than 20,000 Afghan citizens.

"The United States has yet to announce any such policy for LGBTQ+ Afghans," the Congress members wrote.

The letter followed on the heels of a similar one sent to Blinken August 2. That letter, led by Senator Amy Klobuchar (D-Minnesota), was signed by 12 Democratic Senate colleagues questioning the State Department's protection of LGBTQ asylum seekers.

Drew Hammill, a gay man who is a spokesman for House Speaker Nancy Pelosi (D-San Francisco), wrote in a statement to the B.A.R. August 31 that "protecting LGBTQ Afghans and facilitating the immediate evacuation of those at risk is a significant and urgent priority for [the speaker]."

Hammill stated that throughout the evacuation process, Pelosi has worked with State Department officials and the military "to enable and, where possible, expedite [at-risk LGBTQ Afghans'] evacuation."

"We will continue to steadfastly advocate on behalf of the Afghan LGBTQ community and work closely with the administration to ensure the safety and well-being of the LGBTQ community and other Afghans at risk," Hammill stated, adding that the security of LGBTQ Afghans is of "great importance" to Pelosi's efforts working with Biden's administration.

The State Department spokesperson stated, "We are closely watching the Taliban's actions across the country. If we find atrocities or other human rights abuses committed by the Taliban or any other group, we will work with our allies and partners to hold the perpetrators accountable."

However, LGBTQ Afghans and human rights organizations are reporting human rights abuses against queer Afghans, women, and other vulnerable groups.

On August 30, Sadat posted on his Facebook page that on August 28 Taliban soldiers barged into a home and put "plastic bags over the heads of two LGBTQ Afghans, dragged them away, and executed them."

"The corpses were identified, and multiple sources have confirmed this war crime," he wrote.

Not giving up
Sadat said that the goal of human rights groups, LGBTQ organizations, and queer activists now that the withdrawal is completed is to quickly get queer Afghans out of the country, using channels outside of the U.S. if necessary. Sadat said that during the past two decades of thousands of non-governmental organizations operating in Afghanistan, "not one was dedicated to the LGBT community."

Afghanistan is one of 30 countries OutRight Action International identified as not having any LGBTIQ organizations in its 2018 Right to Register report, Paul Jansen, OutRight's senior adviser for Global Advocacy, wrote in a statement to the B.A.R. OutRight said one of the biggest obstacles saving queer Afghans' lives is the lack of contacts on the ground and manpower.

"Practical support on the ground is also limited," he added. "We are in touch with a few activists who have gone underground. Their safety is our top priority. The reality for the vast majority of people in Afghanistan — including vulnerable LGBTIQ people, women and girls — is that they will not be able to leave."

In a September 1 news release, Immigration Equality stated that it has received requests for assistance from 80 LGBTQ Afghans, and its attorneys spoke directly with 50 queer people before the U.S. government left the nation.

"We did everything in our power to get as many people out as possible," the agency stated.

Blinken acknowledged August 30 that untold numbers of vulnerable Afghans, fearful of the Taliban, were most likely to be left behind by the U.S., NATO, and allies.

Saving themselves
Sadat said that he is still working with other organizations to safely get the estimated 1,000 LGBTQ Afghans out of Afghanistan. He's also pushing the U.S. to protect LGBTQ Afghans.

He launched a petition calling for the immediate evacuation of LGBTQ Afghans.

On August 30, Blinken said the U.S. is working with other countries in the region to keep the Kabul airport open after Tuesday or to reopen it "in a timely fashion."

OutRight called for LGBTQ rights to be safeguarded.

"The human rights of LGBTIQ people have to be safeguarded even in times of extreme crisis," wrote Jansen.

Out in the World: Biden calls out anti-gay nations in UN address
Sign up!