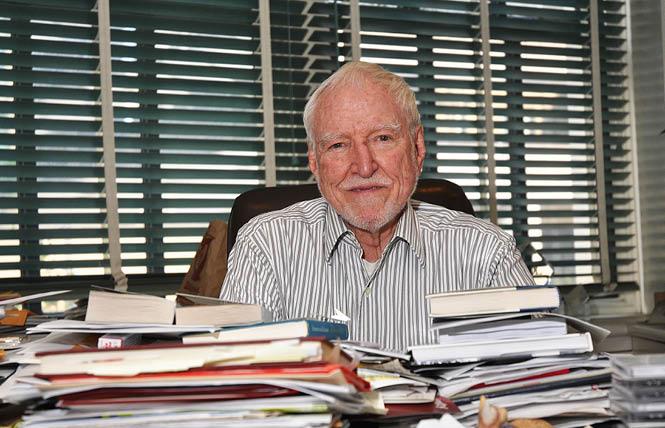 The late Ambassador James C. Hormel in his office in 2011. Photo: Rick Gerharter

[Editor's note: This summer, Out in the Bay is airing a mix of previously recorded shows and new content. This week is a new broadcast.]

In a tribute to the late Ambassador James C. Hormel, on this week's Out in the Bay podcast and broadcast we bring you his story — in his own words and voice. The gay philanthropist and LGBTQ civil rights and Democratic activist died August 13 at age 88 after a full and fascinating life.

After a yearslong political fight in which far-right Republican opponents accused him of pedophilia and more, Mr. Hormel made history as the highest-ranking openly LGBTQ U.S. official ever when he finally became ambassador to Luxembourg in 1999 after being nominated by then-President Bill Clinton.

A Hormel Foods heir, Mr. Hormel grew up on a 200-acre estate in a place and time — Austin, Minnesota in the 1930s and 1940s — in which being gay didn't seem an option. He married, fathered five kids, and became a law school dean before the political and social tumult of the 1960s brought a deep personal reassessment.

He spent an hour with Out in the Bay in 2011, broadcast live from KALW studios, shortly after publishing his memoir, "Fit to Serve: Reflections on a Secret Life, Private Struggle, and Public Battle to Become the First Openly Gay U.S. Ambassador."

From that lengthy archived conversation we gleaned the parts most salient for This week's tribute. Here are a few of the many things he shared with us:

- Due to kidnapping threats, having playmates was difficult and awkward: "I didn't remember a time in my childhood when there wasn't an armed guard around, or surveillance of some kind. ... We lived outside of town, and the only way I could get back and forth was in a car driven by somebody in uniform."

- "I went to an all-boys school, and there was constant attraction." ... "I was never told gay is wrong. People didn't talk about sex at all." But it was clear that "that was not the way society operated, especially in the 1940s."

- While married and a University of Chicago Law School dean, Mr. Hormel had trysts: "People joke about gaydar, but ... it was not difficult to identify others who were either gay or bisexual or willing to experiment."

- The social upheaval of the 1960s he found "stunning. All these things were happening to me at once. It was 1965 when my wife and I separated and in 1966 I made the first tentative efforts at coming out." He realized the Vietnam War "was a sham." He fled to New York and started "dealing with myself" ... "listening to my hair grow."

- After a gay Clinton aide suggested Mr. Hormel seek a presidential appointment, the notion of an ambassadorial post intrigued him "because it required Senate confirmation. ... I could compel members of the Senate to go on record about LGBT issues."

There is much more in this week's broadcast and podcast.

Eric Jansen is primary host and managing producer of Out in the Bay — Queer Radio from San Francisco. Learn more and listen at https://www.outinthebay.org

Out in the Bay: Friday broadcasts start with 'The Guncle' interview
Sign up!