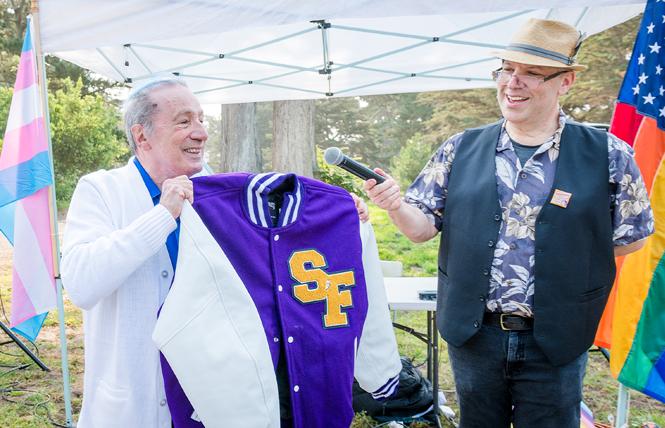 As has been reported in several outlets over the past few months, Ammiano had been on the track team at Immaculate Conception High School in Montclair, New Jersey. After running a successful race, Ammiano was told that he could not receive his high school letter because he had run in "an illegitimate meet." Now 79 years old, Ammiano has long believed that he was denied his letter because he was "effeminate."

Sixty-three years later, the school finally gave Ammiano his letterman's jacket, thanks to the efforts of Stephen Saxon, a straight ally who heard Ammiano tell the story in an interview last year on KQED about his memoir, "Kiss My Gay Ass." Saxon contacted the school, asking it to right this wrong.

After the August 28 Pride Run, FrontRunners members honored Ammiano with a special jacket from their organization in commemoration of the school's action.

Saxon presented Ammiano with a varsity letterman's jacket from the San Francisco FrontRunners as the crowd applauded and cheered. Ammiano happily accepted the jacket. He also showed the audience the jacket he had received from Immaculate Conception High.

"In a way it's a story of redemption," Ammiano told the spectators. "It's a universal story too; it's about a lot of LGBTQ+ youth who still need help from those old white guys who run the archdiocese in New Jersey. So just like every so often you keep running, we're going to keep running because this isn't exactly the finish line but it sure feels good as a consolation prize."

Several political leaders were on hand for the event.

"Tom has done so much for our community for so many years," gay state Senator Scott Wiener (D-San Francisco), who attended the run, told the Bay Area Reporter. "He truly deserves this honor. As a gay man who entered public service when it wasn't always easy to be out, Tom blazed a trail for those of us who came after."

Ammiano has, over the years, dedicated much of his life to serving the LGBTQ community. He worked closely with the late Harvey Milk on fighting the Briggs initiative in 1978 that would have banned gay teachers in public schools. A public school teacher, Ammiano later served on the San Francisco school board and the Board of Supervisors before being elected to the state Assembly. Through it all he was an out and proud gay man.

"It's really great that the school recognized him for something he should have been recognized for 60 years ago," Mayor London Breed, who also attended the run, told the B.A.R. "It's sadly another reminder of our not so distant past, how this country has treated LGBTQ people unfairly. It's clear that although we've come a long way, this Pride Run and this honor he's receiving today are a reminder of the rights that we must fight for to insure the rights of all people."

The ceremony honoring Ammiano took place at 10:15 a.m., right after the Pride Run was completed. KQED's Scott Shafer, a gay man who interviewed Ammiano on the topic last year, emceed the event.

Gay BART board member Bevan Dufty, himself a former city supervisor, was also on hand.

"What I want you to take away from this is Tom only blinks when he wants to," Dufty said as he addressed the crowd. "And by that I point out that Tom has achieved what I see as some of the major legislative accomplishments that have helped to change San Francisco. In these situations, you get pressed really hard, you get people telling you it's too much, too fast, too soon. And what I can tell you about Tom is that throughout his career he's had the courage of his convictions, more than anyone that I've seen in politics."

Dufty pointed out that as a supervisor in 1996, Ammiano sponsored legislation that required that any business working with San Francisco had to provide benefits to same-sex employees just as they treated their married employees. Dufty also noted that Ammiano was the author of Healthy San Francisco, a program that allowed uninsured San Franciscans to receive health care in the years before the Affordable Care Act.

Shafer reminded the crowd that Ammiano was the first openly gay president of the school board at a time when being a gay teacher could get a person fired. Shafer also spoke of how hurtful it had been for Ammiano not to receive his varsity letter.

"He came out to San Francisco and channeled all that anger, humiliation, and shame into positive things, making people's lives better," Shafer said.

Saxon then took the microphone.

"The story about his track letter touched me," Saxon said. "I'm a straight white male who wasn't even born when all that happened. But I know about being made to feel shame for simply being who I am, and I know how much that hurts. In that interview Tom said that even after 60 years it still hurt.

"Ultimately, Tom put his finger on the central meaning of the story. It's not about Tom, and it's certainly not about Scott or me, it's about what this represents to those, including many of you, who struggled just to get through life being our honest selves. It's about seeing that eventually, even after six decades, you might have a chance to see your own defeat reframed as a victory. If you hang in there, it gets better," Saxon added.

Ammiano praised the event and the FrontRunners.

"I think it's terrific," Ammiano told the B.A.R. after the ceremony. "The FrontRunners have done so much and have sustained for 40 years. So I'm very proud of the recognition, although it's bigger than me. There's a universal message of hope and redemption to LGBTQ+ youth."

Members of the FrontRunners were pleased by the honor Ammiano received.

"It's wonderful," added Martin Brook, 69, who is a bisexual man. "I think we're all getting near the finish line in gay rights. Tom's made a wonderful contribution."

Jim Maloney, a gay FrontRunners member who organized the event, said it celebrated all of Ammiano's contributions.

"It was actually an honor for us, as his hometown running club, to honor him for his life's work and for his running accomplishments too," said Maloney. "I, for one, was hugely inspired by this event. We were reminded a bit about our LGBTQ history and how we got to where the movement is today."