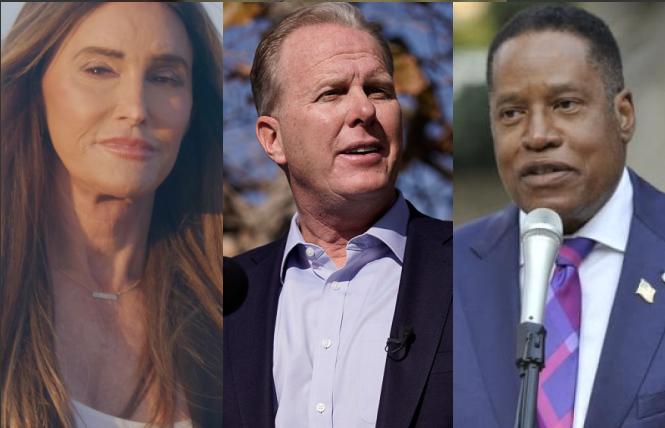 Even with one of the country's most famous transgender celebrities on the ballot, the California gubernatorial recall election has largely been bereft of any discussion of LGBTQ issues. The specific concerns of the state's LGBTQ residents are nowhere to be found on the websites of the top-polling candidates aiming to replace Democratic Governor Gavin Newsom.

Nor does the campaign site for the leading group fighting the recall say anything about what Newsom's removal may mean for LGBTQ rights going forward. LGBTQ voters also won't find much on Newsom's own website other than a brief mention of his being an early advocate for marriage equality when he was the mayor of San Francisco and ordered city employees to ignore state law and wed same-sex couples early in 2004.

Other than that there is nothing about what Newsom has done on LGBTQ issues over his first three years as governor. His accomplishments include signing landmark LGBTQ rights bills into law, allocating historic amounts of state funding toward LGBTQ health issues, and naming the first out LGBTQ person to serve on the state's supreme court.

Thus, countless LGBTQ elected officials and community leaders have come out against the recall. Numerous LGBTQ Democratic political clubs are also pushing a no vote on the recall and, in recent days, have taken part in get-out-the-vote efforts across the state.

They have also seconded Newsom's strategy on leaving the second part of the recall ballot blank where it asks voters to pick their preferred replacement candidate to succeed the governor if he is ousted from office. Newsom was barred from running as a candidate himself in the September 14 recall election.

Or LGBTQ leaders simply have remained silent on the question of whom among the 40-plus people who qualified for the recall ballot would be the best person to ensure LGBTQ issues continue to be seriously addressed and supported post a Newsom gubernatorial administration.

"For those frustrated with Governor Newsom, recalling him won't put someone better in office. It's a binary choice of Governor Newsom or someone worse," wrote bisexual Assemblyman Alex Lee (D-San Jose) in a recent email to his constituents imploring them to reject the recall attempt.

Based on what the leading candidates, or those who have generated the most media attention to date, are saying on their official campaign websites there isn't a clear answer for which candidate LGBTQ voters, in particular, should cast a ballot for if they do want to answer the second question. Like most of the state's mainstream newspaper editorial boards, the Bay Area Reporter's editorial board came out against the recall altogether and also told readers to skip the second question since there aren't any recall candidates "qualified to run the world's fifth largest economy."

Republican former Olympic gold medalist Caitlyn Jenner, who came out as transgender several years ago, last week met with the San Francisco chapter of the Log Cabin Republicans, the political home for LGBTQ GOPers, and did a walk through the Tenderloin district with several media outlets in tow to see the city's homeless crisis in person. Yet the reality TV star has very little to say about specific LGBTQ issues on her website other than stating a stance on the matter of trans youth playing school sports that LGBTQ advocates have denounced.

The issue has become a rallying cry for Republicans across the country, with GOP legislators in numerous statehouses this year moving to force trans student athletes to compete on teams based on the gender they were assigned at birth. Jenner writes on her website that she largely agrees with the reasoning proponents of such laws express.

"That is why my position has been so clear and consistent: biological boys should not be allowed to participate in girls sports. It is a question of fairness," states Jenner, who transitioned long after her athletic career had ended. "To be clear, I do believe that athletes that have fully transitioned should be able to participate in sports provided they meet all other eligibility criteria as defined by their state, local, league, conference, or school rules."

Jenner adds that, "as a society, we should always encourage as much participation as possible while maintaining the fairness and integrity of the competition."

Despite his reputation as being an LGBTQ-friendly mayor of San Diego when he served in the elected role, Republican Kevin Faulconer makes no mention of his track record on LGBTQ issues in his Southern California city on his campaign website. Even when he could easily mention LGBTQ Californians, Faulconer fails to do so and omits the LGBTQ community in arguing why voters should support him replacing Newsom in Sacramento.

Take for instance this pledge under Faulconer's school education plan that says "he will also tap into the innovative spirit of California's technology community, education reformers, teachers, and parents to make sure that every student — regardless of race, ethnicity, income, or disability — gets the education they need and deserve." Sexual orientation and gender identity are conspicuously missing from the list of protected demographics.

Republican businessman John Cox, who lost to Newsom in 2018 by 24 points, also says nothing about the specific needs of LGBTQ Californians on his site. Even though studies have shown 40% of homeless youth in the state identify as LGBTQ, how to move queer youth into housing goes unmentioned in Cox's plan for addressing homelessness.

Another Democrat, San Franciscan Joel Ventresca who is the recommended choice of the League of Pissed Off Voters, is also silent on LGBTQ concerns. He does list a generic pledge to "confront bias, discrimination & bigotry" on his site.

While several LGBTQ Green Party members are encouraging people to vote for fellow Green Dan Kapelovitz, the attorney says more about animal rights than he does about LGBTQ concerns on his site.

He argues "it's time" for California's next governor "to represent all Californian creatures, great and small," asking if "a corporation is considered a 'person' with some constitutional rights; shouldn't living animals, capable of suffering and joy, be as well?"

As for the candidate LGBTQ voters should pick, the California Log Cabin Republicans isn't of much help either for those looking for some concrete guidance. While the group supports Newsom being recalled, it refrained from endorsing a specific candidate to replace him.

Instead, it has said Jenner, Faulconer, Elder, and Assemblyman Kevin Kiley (R-Rocklin) are all "solid choices for Gavin Newsom's replacement." Like the others, though, Kiley doesn't give much of a reason for LGBTQ voters to want him to be governor on his site.

"Whether one is seeking an outsider like Caitlyn Jenner, an established politician that knows the rules of the game like Kiley and Faulconer, or a staunchly conservative thought leader who has shaped conservatism for two generations like Elder, the Log Cabin Republicans would be pleased with any of these candidates to send Gavin Newsom into obscurity," wrote the state's Log Cabin chapter in a statement about the recall election.

Web Extra: For more queer political news, be sure to check http://www.ebar.com Monday mornings for Political Notes, the notebook's online companion. This week's column reported on the LGBTQ legislative candidates running across California in 2022.