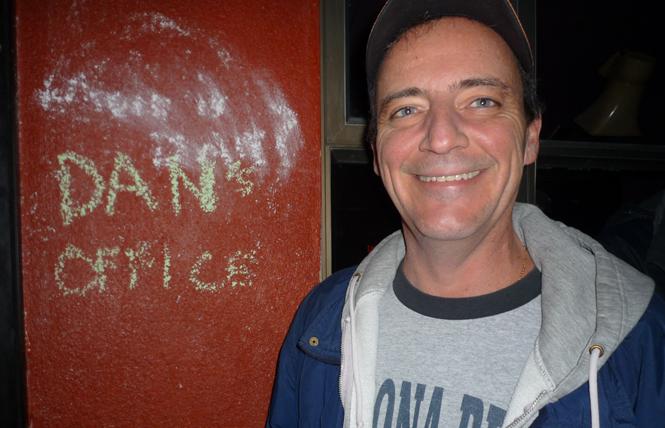 Dan was born in Oswego, New York on November 26, 1960. He was raised in Liverpool, New York, where he graduated from Liverpool High School in 1978 before getting a degree from the Pittsburgh Art Institute and pursuing a career in advertising and marketing.

In 1996, Dan was recruited to move to San Francisco by Bill Lanese Advertising, where he worked as manager of Coop Advertising before becoming vice president of advertising at Terry Hines & Associates in 2001. He specialized in film and DVD release advertising for the movie industry, with Warner Brothers as one of his most prized clients.

Dan was a much-loved patron of many of the Castro's watering holes, including The Mix, Toad Hall, QBar, The Pilsner, Lookout, and Beaux, but his real home — which he called "Dan's Spot" — was The Cafe, where he was the most regular of regulars for two decades. He occasionally played for The Cafeholics, one of The Cafe's San Francisco Pool Association teams, and always came out to root for the home team even when he wasn't playing that season. He also rooted for his other home team, the 49ers. He helped organize several group trips to the Russian River and Palm Springs and hosted countless barbecues and Super Bowl "pageants" at his home. He enjoyed his summers with his family at Fair Haven, New York, on the southern shore of Lake Ontario, where he loved to camp, boat, jet ski, and make bonfires.

He moved to Palm Springs in 2014 before returning to upstate New York to help care for his father, Dominic Crisafulli, who passed away in 2017.

Dan is survived by his mother, Mary Crisafulli; his sisters, Debi Moe, Denise (Michael) Lizzio, Doreen Carson-Maddison (Sean), and Deanna Crisafulli; 10 nieces and nephews and 15 great nieces and nephews; as well as great friends in San Francisco, Palm Springs, and everywhere he went. He will be missed dearly.

A celebration of Dan's life will be held at The Cafe, 2369 Market Street, Saturday, September 25, starting at 4 p.m.