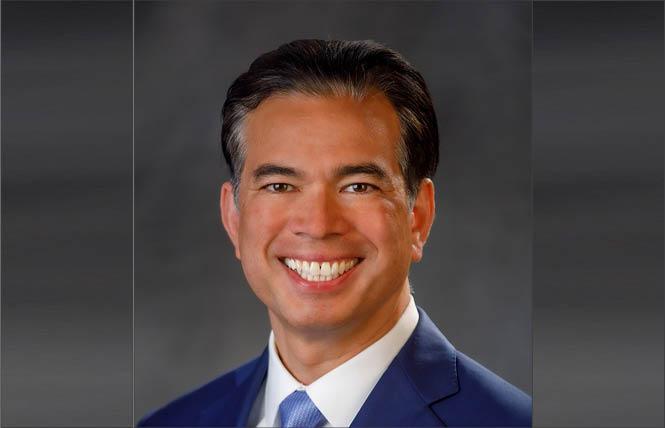 Attorney General Rob Bonta has asked the state Supreme Court to review an appellate court's decision to strike down a provision of the LGBTQ Senior Bill of Rights. Photo: Courtesy CA AG's Office

State Attorney General Rob Bonta filed a petition of review to the state Supreme Court August 25 in defense of anti-discrimination protections for LGBTQ residents of long-term care facilities that were ruled unconstitutional last month by a California appellate court.

The protections were codified into law as part of the LGBTQ Senior Bill of Rights, which was enacted through Senate Bill 219 by the California Legislature in 2017. Gay state Senator Scott Wiener (D-San Francisco) authored the legislation, which was signed by former governor Jerry Brown (D).

In the brief, Bonta urges the California Supreme Court to review what a news release from his office called "the Court of Appeal's erroneous decision, and restore SB 219's protections for LGBTQ seniors and other long-term care facility residents."

"Discrimination isn't about one person or one community. When people are unlawfully subjected to hateful, demeaning rhetoric, it hurts all of us," stated Bonta, a straight ally. "State law protects people from racist speech in the workplace — and, likewise, there's no exception just because it's transphobic instead. Let's be clear: Repeatedly, willfully misgendering or deadnaming someone is harassment.

"Many of our seniors here in California led the charge for LGBTQ rights nationwide," Bonta continued. "Our seniors and other long-term care residents shouldn't be forced to relive those fights in the 21st century. That's part of why we're urging the California Supreme Court to review this case."

As the Bay Area Reporter previously reported, in the case of Taking Offense v. California, a three-judge panel of the 3rd District California Court of Appeal in Sacramento came to a unanimous decision that a provision in the LGBTQ Senior Bill of Rights violated the rights to freedom of speech and the free exercise of religion.

That provision required long-term care staff to refer to facility residents by their preferred names and pronouns.

Wiener and Equality California Executive Director Rick Chavez Zbur, a gay man, blasted the appeal court's decision when it was issued. They were no less resolute when defending Bonta's decision to urge the state Supreme Court to review the appellate court decision.

"In response to the dangerous decision by the Court of Appeal to overturn key protections for trans seniors, Attorney General Bonta is stepping up to appeal this bad decision," Wiener stated. "It's never OK to intentionally and repeatedly misgender a transgender person. This isn't a matter of political opinion; it's straight-up harassment. We must ensure that all marginalized people — including trans seniors living in nursing homes — are treated with respect and dignity. This misguided decision is terrible, and we will fight it."

"California seniors deserve to age with dignity and respect," he stated. "It's unconscionable that a court would allow blatant harassment of our LGBTQ+ elders. We are so grateful to Attorney General Bonta for appealing this outrageous decision and standing up for full, lived equality for all LGBTQ+ people."

Bonta's release stated that despite years of progress, harassment against transgender Americans remains pervasive — and deadnaming and misgendering, in particular, are two of the most common types of verbal harassment. Deliberately using the wrong pronoun to refer to a transgender person conveys that the person's identity is not worthy of respect.

"At its core, such language stigmatizes transgender people and wrongfully suggests they are not welcome members of society," the release states. "Although California already provides some of the strongest civil rights protections in the nation, LGBTQ seniors are disproportionately vulnerable to discrimination, marginalization, or isolation, particularly in the long-term care context."