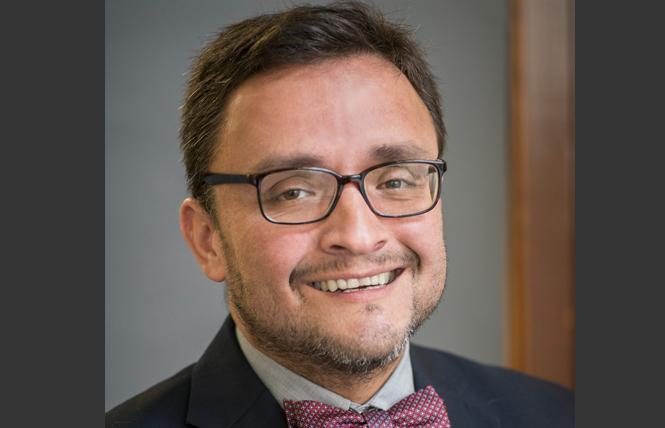 Confirming what had been speculated for months, gay former San Francisco supervisor David Campos this week launched an exploratory committee to once again run for a state Assembly seat. Should the 17th Assembly District seat covering the city's eastern neighborhoods become vacant this year, Campos intends to seek it in the special election that would be called to fill it.

On Tuesday, August 24, Campos officially announced he was exploring a bid for the Assembly seat that includes the city's LGBTQ districts as well as the heavily Latino Mission district where he resides with his husband, Phil Hwang. Campos, 50, also unveiled a campaign website.

He had previously run for it in 2014 but lost to the winner, Assemblyman David Chiu (D-San Francisco), his Board of Supervisors colleague at the time. Mayor London Breed is widely expected to name Chiu as city attorney due to her picking the current officeholder, Dennis Herrera, to run the troubled San Francisco Public Utilities Commission as its general manager. An announcement about Herrera's replacement could come as soon as early September.

If she does name Chiu to the position, it will result in a special election being held to fill his Assembly seat through the remainder of his term that ends in December 2022. The victor of the race would need to run in next year's contest for a full two-year term in the Assembly.

Having an open Assembly seat is likely to draw a number of high-profile candidates, as the person could serve in the position for 12 years. Campos, now serving as San Francisco District Attorney Chesa Boudin's chief of staff, is the first person to signal they intend to seek it. If Chiu ends up seeking another term in the Assembly then Campos will not run against him and likely wait until 2026 to run when Chiu would be termed out.

"I think that it is really important to explain that there are communities that have been impacted by COVID that, to this day, feel their voices are not being heard," said Campos, elected this year as a vice chair of the state Democratic Party. "It is important, I think, for someone who comes from those communities to represent them in Sacramento."

Prior to Chiu's election, gay former city supervisor Tom Ammiano had represented the Assembly district. Should he be elected, Campos would be the first gay, formerly undocumented Latino in the state Legislature from San Francisco and return out representation from the city to the Assembly.

(The city's other current assemblyman, Phil Ting (D-San Francisco), is straight and seeking reelection next year. Gay state Senator Scott Wiener (D-San Francisco) was reelected to a four-year term in 2020.)

"I think it is important to be clear what this election is about. These communities deserve representation," said Campos, who at 14 fled political turmoil in his native Guatemala with his family and crossed the U.S. border carrying his sister on his back.

Fellow progressive Democrat District 6 Supervisor Matt Haney, a straight ally, is also eyeing a run for the Assembly seat. He told the Bay Area Reporter Tuesday that he is "seriously considering" mounting his own candidacy.

"I have a job as supervisor that I'm focused on. If there is a vacancy, at that point I will consider it," stated Haney, 39, who has long been talked about as a mayoral candidate either against Breed in 2023 or when she is termed out.

LGBTQ leaders supportive of Campos are already questioning Haney's credentials for the Assembly seat, noting he was elected to his supervisor seat only three years ago. Asked about seeing Haney or another high-profile opponent enter the Assembly race, Campos told the B.A.R. who runs for the seat is out of his hands.

"We are focused on our campaign and why we believe these communities deserve representation. We can't control what happens; it is a democracy and people can choose to run," said Campos. "We will focus on our message and why we believe, as we are still going through COVID, the communities impacted the most by COVID deserve representation and deserve a voice in Sacramento."

Newsom taps gay man for barber board
Governor Gavin Newsom has tapped gay San Francisco resident Reese Aaron Isbell, a Democrat, to serve on the California Board of Barbering and Cosmetology. He made the appointment Monday, August 23.

Isbell, 50, is serving on the nine-member oversight body in a consumer advocate role. It is responsible for the licensing, regulatory, and disciplinary matters related to the barber and cosmetologist professions, which include spa operators and manicurists.

Hired this year as a senior account executive at Gravitate PR, Isbell told the B.A.R. he has seen the woman who has cut his hair for at least 15 years.

"Of course, in 2020 I somehow managed to do it myself rather badly due to COVID," he noted, as for much of last year barbershops were ordered closed to help stem transmission of the coronavirus. "I haven't been a regular consumer of spas, just getting my hair cut about once a month or so."

In July, Isbell stepped down from the San Francisco Rent Board after serving two years as a tenant representative appointed by the mayor because he and his husband, Sheng "Bruce" Yang, bought a condo in the city. If confirmed by the state Senate to the state oversight panel, Isbell would receive a $100 per diem.