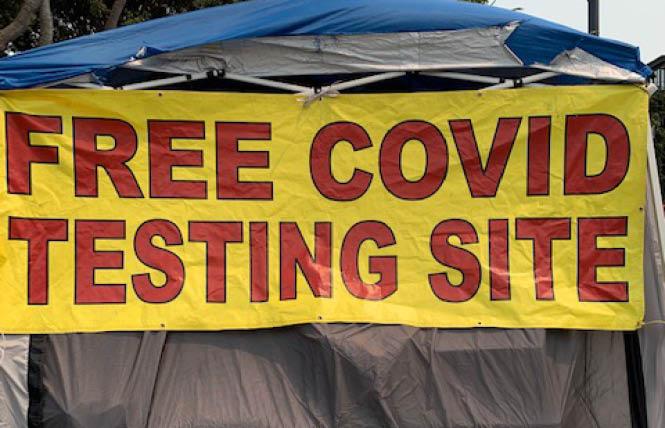 The San Francisco Police Department shut down what they termed was "an unauthorized COVID-19 testing tent" near Market and Church streets Wednesday, a spokesman stated to the Bay Area Reporter Friday.

The area is a heavily trafficked section of the city's LGBTQ Castro district and upper Market Street corridor with stops for multiple transit lines and the underground Church Station for the subway system. Both a Safeway and Whole Foods grocery stores are located on the block where the testing tent was operating.

"On Wednesday August 18, 2021, at approximately 5:33 p.m., San Francisco Police officers assigned to Mission Station responded to the 2000 block of Market Street on a report of an unauthorized COVID-19 testing tent," SFPD public information officer Adam Lobsinger wrote in an email. "Officers arrived on scene and met with two subjects, a 34-year-old female and a 28-year-old male. The subjects did not provide satisfactory credentials for operation. The subjects were advised to cease operations and they complied. Officers authored an incident report and forwarded a copy to the San Francisco Department of Public Health."

Lobsinger, responding to a follow-up question about what the operators of the tent were doing there, stated that "the report does not detail what specifically was inside."

"It states that it was a 'pop-up' canopy tent with signs that read 'Free COVID Testing,'" Lobsinger stated. "I am unable to get further information from the reporting officer as he is not in today."

Noel Sanchez, a spokesperson with the health department, told the B.A.R. that it is "looking into the appropriate enforcement measures."

"We are aware of groups offering COVID-19 testing in the city that either do not have the appropriate permits to set up testing stations or are not operating in affiliation with the San Francisco Department of Public Health (SFDPH) or our community, academic, and health care partners," Sanchez stated. "We are taking the necessary steps to address the situation.

"We urge members of the community to visit www.sf.gov/gettested to find testing site options," Sanchez concluded.

Kimyn Braithwaite, the president of the Duboce Triangle Neighborhood Association, told the B.A.R. August 19 that she saw the tent Monday.

"I did see the tent on Monday and Tuesday but haven't been by since so not sure if they are still there," said Braithwaite. "I have seen the activity on the Duboce Triangle neighborhood Facebook page accusing the group to be scam artists but am not aware of anyone from the DTNA board contacting authorities."

Gay District 8 Supervisor Rafael Mandelman told the B.A.R. the same day that he had heard of it but wasn't sure what it was.

"I have heard of a tent at Church and Market [streets] that is gathering signatures for stuff — maybe ballot measures — and that was described as sketchy," Mandelman said. "I don't think it's official in any way. I have not personally seen it, but I've heard it mentioned."

In addition to contacting the city's website, people can get a COVID test and vaccinations this Sunday, August 22, in the Castro as part of the Castro LGBTQ Cultural District's event in collaboration with the San Francisco Department of Public Health, the Castro Merchants Association, and Virus Geeks, an organization that provides COVID PCR tests.

People can go to the intersection of Noe and Market streets as part of the Noe Art Mart, from 11 a.m. to 6 p.m. Through the event the LGBTQ district will also be honoring Marsha P. Johnson, one of the figures from the Stonewall riots.

Updated, 8/20/21: This article has been updated to include a local COVID testing/vaccination opportunity Sunday, August 22.