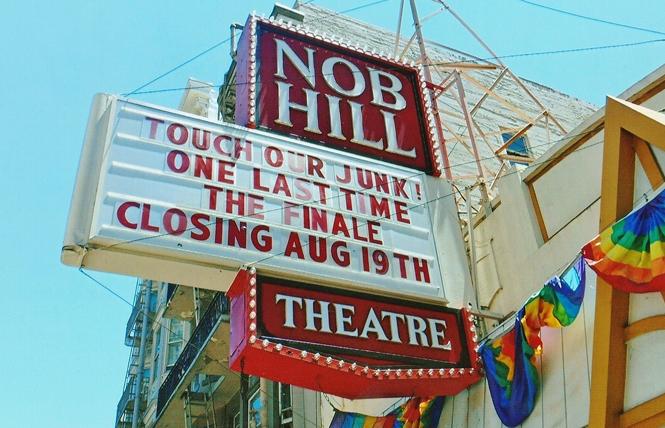 The Nob Hill Theatre marquee with its famous signage just before it closed in 2018 Photo: Cornelius Washington

The old Nob Hill Theatre sign will stay, but the "touch our junk" tagline is no more.

That news was delivered during a public Zoom meeting August 17 as the new owner of the gay former strip club and adult theater unveiled his plans for a medical center and new housing.

Representatives of the new owner of the former Nob Hill Theatre at 729 Bush Street also discussed efforts to appropriately honor the theater's history. The Nob Hill closed in 2018. It had been owned by Larry Hoover and his husband, Gary Luce, who retired.

The 30-minute meeting had about four attendees who were not members of the development team, according to Eliot Dobris, a gay man who is the communications consultant for Dr. James Chen, an orthopedic surgeon at St. Francis Hospital who now owns the site, situated between Union Square and Nob Hill.

Chen, a straight ally, stated that he plans to "be a good steward of the history of the site." According to his website, Chen works with the athletic departments of several local schools and is the team physician for the San Francisco City Football Club, an amateur soccer organization.

"This theater was a legendary spot for gay men from 1968 to 2018 and prior to that it was a famous location for jazz," Dobris said. "The last owners of the theater sought a new owner to continue operating the theater. After a long search, they were unable to find one. Eventually they sold the theater to Dr. Chen, who is seeking to build a surgical center and medical center, plus new housing, including a residence for his family."

Dobris said that the city's planning department designated the theater a historical resource after an evaluation written by Tim Kelley, the former president of the San Francisco Landmarks Commission, that was finished in 2018.

"They are seeking to ensure that this piece of LGBTQ+ history is appropriately remembered and preserved," Dobris said, referring to the planning department. "The development team — that's all of us — are working with [the] planning [department] to make this happen and we're calling these efforts the Nob Hill Theater History Project."

In the renovations, therefore, the facade, the red portions of the signage, and the theater auditorium will be maintained, Dobris said, adding that all public input will be considered. Feedback can be given at the website of the Nob Hill Theater History Project.

A historical plaque will be placed on the site to direct visitors to a website with information about the site's history, and there will also be a display case of original objects from the theater and from the space's prior incarnations as jazz clubs.

The website will include a written history, a collection of photos, and audio and video recordings from "the prior owners and past employees, performers and patrons," Dobris said. 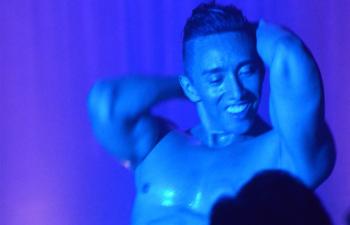 Burlesque nights were popular at the Nob Hill Theatre, such as this one in 2014. Photo: Steven Underhill

The white portions of the sign will be used to identify the contemporary uses of the site.

"It will no longer say 'touch our junk,'" Dobris said. "That will be removed."

The GLBT Historical Society is in possession of historical items of interest from the old theater, including a glory hole booth. The society did not respond to a request for comment.

Dobris said that squatters caused damage to the building, which was documented through photos in the presentation, which is posted to the project's website.

The building sold to Chen in 2018 for $2.7 million, according to SocketSite, which also stated the new building will be 50 feet high with five stories.

According to the presentation, the proposed development on the site includes a surgical center with two operating rooms and one minor procedure room; 3,700 square feet of medical offices; and four units of housing. These include a four-bedroom residence for Chen, two three-bedroom units, and one one-bedroom unit.

"San Francisco has a desperate need for more medical and surgical space. As the needs of patients have grown, available space to care for them has not kept up," Chen stated in the presentation. "I searched for several years for a central location that would allow me to expand my practice. I also want to use that space to build housing, which is so badly needed in our city."

Dobris told the Bay Area Reporter that the meeting was part of a process to gather comments from the public. When asked if there was any opposition to these plans, he said, "I think the simplest way to answer that is no."

"There's a process to this and this meeting is part of the process, which offers us the opportunity to hear from people and see feedback for these plans and to make sure we are honoring the history of the theater and doing it right," he said.