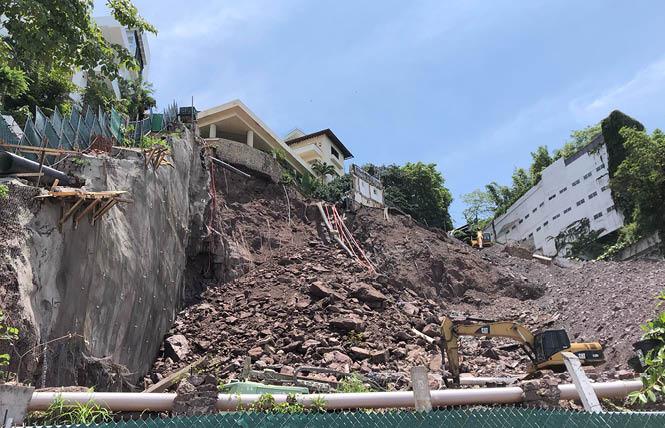 Fingers are being pointed at Mexican federal regulators, the city of Puerto Vallarta, and a condominium developer after a hillside collapsed near the gay beach in Puerto Vallarta last week.

According to a story published in the Vallarta Uno newspaper, federal environmental regulators ignored warnings that its order to stop work in January of a condo development overlooking Los Muertos Beach would be dangerous. The work was ordered halted because the project lacked an environmental impact permit as well as other required permits, according to local media.

On Tuesday, August 10, the hillside just south of the gay-popular section of the beach collapsed, forcing the evacuation of the site's neighbors and taking with it part of Calle Santa Barbara, the street where the luxury condo complex Serena was being built. Dramatic video of the landslide was widely circulated on social media. Fortunately no one was hurt.

Marcel Vobejda, a Realtor who is listed as the contact for the Serena development's sales website, forwarded the Bay Area Reporter a link to the Vallarta Uno story August 13. When asked if he had a statement on behalf of the developer and whether the developer had obtained the proper permits before starting work last year, he replied: "I can't comment for the developer, his position will soon be stated. It seems like common sense what they point out in that article, doesn't it? All permits were granted prior to starting any work."

The Puerto Vallarta City Council plans to take legal action in connection with the collapse, Vallarta Daily News reported last week. The news website, www.noticiasPV.com, is reporting that neighbors plan to sue the city of Puerto Vallarta as well as the developer.

Sylvia Toy, the president of the Amapas Neighborhood Association, told the B.A.R. in a Facebook message that she didn't know anything about the developer warning PROFEPA (the Mexican environmental protection agency) about the risks of a work stoppage but she wrote that the developer's city permit was found by a higher authority to be illegal.

"The permit granted by the city was done so illegally, because PRODEUR (state attorney general's office) found that the permit was in violation of the Plan Parcial for District 9, which includes the colonias of Amapas, Conchas Chinas, and down south to Los Nogalitos," Toy wrote. "I have the document sent to us by PRODEUR. Of course, it's all in Spanish, however, I did a side-by-side English translation. The developer, Roberto Contreras, with whom we had two meetings, is aware of the document from PRODEUR."

When asked to respond to Toy, Vobejda wrote in an email, "I have no comments on that; all I know is that I haven't seen any documentation saying it's illegal. And from what I understand there is a new Plan Parcial that has been approved and is about to come out of the public registry."

Officials said the slide was the result of the steep hillside becoming saturated with rainwater. Puerto Vallarta's rainy season runs from July through October. A number of heavy rains would have had time to soak the partially-excavated hillside during the time of the government-ordered closure.

In February, the developer made Mexican federal environmental officials aware of his concern that stopping work on the project while in the excavation phase was dangerous, according to Vallarta Uno. On July 8, a federal judge sided with the developer and allowed him to resume work.

Vallarta Uno noted that the judge's decision came too late, after months of the hillside being saturated with rain. The Mexican environmental protection agency, PROFEPA, did not respond to Vallarta Uno's or the B.A.R.'s request for comment.

"The developer suffered constant harassment from inspectors of the federal agency," Vallarta reported, referring to PROFEPA.