by by Jim Chappell 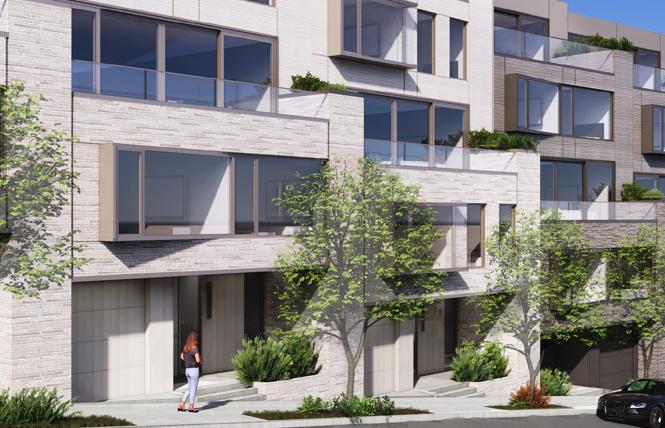 In 1977 I escaped from the Midwest and arrived in our gay haven, the Castro. Even though I was in my early 30s I did something a young person would never be able to do today ... buy a fixer in District 8. And many of the young people I worked and socialized with, gay and straight, also could live in the neighborhood because the supply of homes exceeded the demand, and prices were reasonable.

Fast-forward 44 years, and the situation is completely different. While some areas of town, like South of Market, Mission Bay, and Rincon Hill, have opened their arms to new homes, others including Noe Valley, Glen Park, and Diamond Heights (all within District 8) have offered scant new infill housing despite being blessed with abundant parks, charming shopping blocks, and well-connected transit opportunities. In fact, none of those three neighborhoods has produced a single housing development of 20 or more homes in over 40 years. This is shocking. As population has increased and the supply has stayed static, homes have become scarcer and prices continue to rise, forcing out many of our LGBTQ brothers and sisters.

District 8 now has the opportunity to create homes for 24 families at 1900 Diamond Street, where Diamond Street meets Diamond Heights Boulevard. And it's not that this is a sacrifice — it is our privilege to facilitate the construction of badly needed infill housing in our neighborhood. Two important bus lines, the 52 connecting to Glen Park BART, and the 35 connecting to Castro Muni Metro, stop at the site. This is the very definition of a prime transit-oriented development site. The Diamond Heights shopping center, with its Safeway and a number of small shops and eateries, is a block away. Additional residents living in the neighborhood will support our neighborhood businesses, more important now than ever before. More residents will also bolster Muni ridership, an important consideration as Muni is carefully considering additional service cutbacks based on patronage.

Urban infill housing, like 1900 Diamond Street, is the single most effective local policy tool we have to reduce greenhouse gas emissions. The Cool Climate Network, out of UC Berkeley, reports that 24 homes in this location produce 799 less tons of carbon per year than the same number of households in Alamo, California, a typical East Bay bedroom community. This is an exceptionally high amount of carbon savings, far in excess of the carbon savings typically found in a shift to electric vehicles, electric appliances, or solar power.

The project at 1900 Diamond will also lead to the creation of approximately 11 new affordable homes through payment of a $2.8 million fee to the San Francisco Mayor's Office of Housing. This translates to 31% of the total homes created being affordable housing, a notable figure. Moreover, the Cesar Chavez Foundation, which was started by the late farmworkers union co-founder 40 years ago and is today led by his son, Paul Chavez, is the land seller and will use the proceeds to further its mission of creating affordable housing and providing services to Latinx working families.

As the new homes are built into the side of a steep hill, no neighbor will lose a view from their home. Diamond Heights was a redevelopment area designed in the 1960s and exhibits the aesthetics of the era, with buildings designed as sculptural masses, and the spaces in between essentially "left over spaces." The site's steep hillside renders it unusable for recreation uses. The building typology is similar to the houses on both Diamond Street and Diamond Heights Boulevard immediately to the north, updated to 21st century quality, resulting in an excellent contextual design. Filling in this leftover space with 24 homes will improve the coherence and urbanity of the neighborhood.

Despite the COVID-19 pandemic, San Francisco, the Bay Area, and the state of California remain in a deep housing crisis. The way out is to take advantage of urban infill opportunities like 1900 Diamond and share the treasured amenities of our community with new families. Adding infill homes in our neighborhood is the progressive thing to do.

Please let Supervisor Rafael Mandelman know that you, too, support new homes in District 8, and testify at the Thursday, October 14, afternoon meeting of the San Francisco Planning Commission in favor of 1900 Diamond.

Jim Chappell, an urban planner, is a gay District 8 resident and the former executive director and president of SPUR.

Updated, 8/20/21: This op-ed has been updated to indicate the planning commission hearing on this project, originally scheduled for August 26, has been continued to October 14.