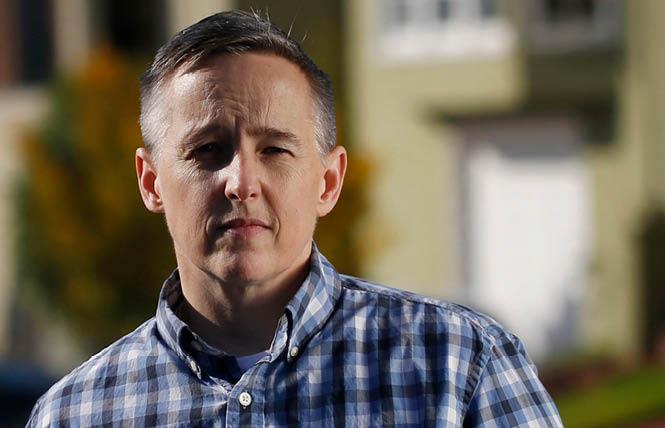 In the wake of a devastating index of LGBTQ user safety online — which found the giant social media sites are "effectively unsafe" due to harassment of, and misinformation about, the queer community — GLAAD has hired a lesbian Bay Area tech pioneer and filmmaker as its new social media safety program director.

Jenni Olson, a lesbian who lives in Berkeley, spearheaded the report, which the Bay Area Reporter covered May 25.

"I started working on it last year, I guess in May, so it was pretty much a year in the making," Olson said.

When asked if she was hired because of her work on the report, Olson laughed and said, "I guess I did a pretty good job."

"Partly," she continued. "It just became so much clearer — the need for a dedicated person to deal with these issues."

In GLAAD's report, the original plan had been to give each company a letter grade, but this was scrapped when staffers at the New York City-based nonprofit realized that the leading social media platforms would have all received an F. The 50-page report's findings () revealed that hate speech and harassment are "the most significant problem in urgent need of improvement," calling them "a public health and safety issue." The index adds a number of recommendations for social media companies as they consider content moderation.

But in the future, annual follow-ups will have letter grades, Olson told the B.A.R.

"One of the things that came out of this is we will be doing annual reports actually grading the platforms as to how well they're doing with LGBTQ user safety," Olson said. "Part of what I'll be doing this year is actively pulling together the 2022 report and on a daily basis — I know, this makes me sound like a superhero — making the world safe for LGBTQs on social media."

Olson, 58, has been involved with the media world — both in filmmaking and tech — for decades. From 1992 to 1995 she worked for Frameline San Francisco International LGBTQ+ Film Festival before co-founding PlanetOut.com, an early LGBTQ community site when the World Wide Web was just coming into vogue. Subsequently she directed two feature films — 2005's "The Joy of Life" and 2015's "The Royal Road" — that premiered at the Sundance Film Festival.

"The Joy of Life" is an innovative feature film about the history of suicide and played a role in renewing debate about the need for a suicide barrier on the Golden Gate Bridge. It's dedicated to the memory of Mark Finch, the former Frameline executive director who died by suicide after jumping off the bridge in 1995. (The Golden Gate Bridge, Highway, and Transportation District is in the process of installing a barrier.)

GLAAD CEO and President Sarah Kate Ellis stated that Olson is exactly who LGBTQs should want in their corner for this initiative.

"The tech industry must realize its obligation to protect its LGBTQ users," said Ellis. "We know these companies can make their products safer. With Jenni's leadership and the power of so many top figures at the intersection of tech and LGBTQ advocacy on our advisory committee, GLAAD will continue to tirelessly advocate for these solutions."

Olson said she has had interviews with all the tech platforms mentioned in the report.

"We intend on working with them in constructive ways," Olson said. "GLAAD is a media advocacy organization and we believe that what people see makes a difference in terms of decisions that get made in public policy."

As the B.A.R. reported last month, the San Francisco Gay Men's Chorus posted a video featuring the words "we're coming for your children" to evoke long-standing fears that gay men will convert children to homosexuality.

Though the lyrics say that the conversion is toward tolerance and fairness, and not toward changing one's sexual orientation, the group received a torrent of negative messages, including death threats, after the website InfoWars — run by far-right conspiracy theorist Alex Jones — called the song "pedophilic."

A lot of subsequent content on YouTube interpreting the song as an admission of pedophilia became hard to avoid for viewers of the original video, however.

"We were able to help in that situation get more extremist things taken down," Olson said. "But the more systematic situation — related to YouTube — is that they have algorithms and other things that come up in the 'related column' and we know from any number of reports that YouTube tends to recommend content that is polarizing and often extremist, and our recommendation is that they stop doing that and offer more authoritative content."

Olson said that the confluence between the tech community and the LGBTQ community in the Bay Area can help inspire change.

"Right here in the Bay Area, there's tons of LGBTQ folks who work for these platforms," Olson said. "Those folks want to see that their companies are responsible to the community.

"That is kind of what GLAAD does every day," she added.

GLAAD declined to disclose Olson's salary. Its most recent IRS Form 990, which shows information from Fiscal Year 2018-2019, does not show Olson's position, which is new. GLAAD's budget is about $19 million.