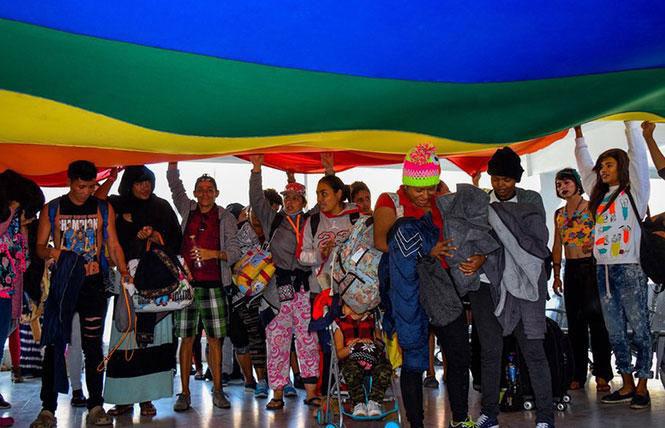 LGBTQ refugees and asylum seekers are facing myriad mental health challenges from the stresses of the migration experience, according to a report released last month.

As the Bay Area Reporter previously reported, #Out4MentalHealth, a project overseen by the California LGBTQ Health and Human Services Network and NorCal Mental Health America, released "Surveying the Road to Equity: The Annual State of LGBTQ Communities, 2019" in November. The report is the result of a survey of 2,875 LGBTQ Californians, and includes within it 24 pages detailing the challenges faced by refugees and asylum seekers, specifically.

Poshi Walker, a queer and nonbinary person who is a project co-director with the mental health advocacy group CalVoices, told the B.A.R. that #Out4MentalHealth held a town hall in 2019 with advocates and providers to inform the writing of the section of the report dealing with refugees and asylum seekers.

This town hall informed five recommendations the report had for governments, organizations and individuals, including expanding Medi-Cal to cover all undocumented people; removing barriers for accessing services so that refugees and asylum seekers won't fear deportation for doing so; providing education to these communities to combat mental health stigma; eliminating detention at least for LGBTQ asylum seekers; and finding and supporting sponsors for them.

Walker said that outside of detention, refugees and asylum seekers face "stigma, fear, wait lists, and other barriers, such as the public charge rule."

The rule allows visas to be denied if the individuals applying are labeled as likely or liable to become a public charge, which is to say overly reliant upon taxpayer support. A 2019 Trump administration revision tightened the rule, which is over a century old.

Under the Trump administration's "Remain in Mexico" program, tens of thousands of asylum seekers of many national origins are waiting in the country for their claims to be adjudicated by U.S. courts.

"For LGBTQ asylum seekers, having to wait in Mexico or other countries may subject them to additional anti-LGBTQ harassment, violence and persecution," the report states.

Other issues
Another issue that contributes to stress among asylum seekers and refugees is the requirement of proof of persecution.

"The very thing they're being asked to prove are the reasons why they are seeking asylum," Walker said. "They can't be so out to show proof of a same-sex relationship, or marriage to a same-sex person. How are they supposed to prove that they're gay? Sometimes the acts they're doing would cause them to be executed."

Walker added that the situation becomes even more complex for bisexual people.

"Bisexual folks who've had a heterosexual-appearing marriage have that extra obstacle," Walker said. "So there's a difficulty right there."

But crossing into the U.S. is hardly a panacea.

"If they are not turned away, they may be placed in detention facilities which are overcrowded, under serviced, and can place them at additional risk of harm from both fellow detainees and staff," the report states.

One town hall participant, who goes unnamed in the report, stated that LGBTQ asylum seekers were treated worse than heterosexual, cisgender ones — sometimes being forced to spend 22 hours a day inside of their cells. Another said that food is often moldy, and contains maggots.

"Of particular note, town hall participants spoke about people in detention being psychiatrically misdiagnosed and overmedicated on a regular basis," the report states. "In addition, there is no follow through after a person is released, leaving many asylum seekers at risk for withdrawal and other negative physical and mental health outcomes.

"LGBTQ asylum seekers face greater risks for abuse within detention facilities than their straight and cisgender counterparts. They experience higher rates of harassment, physical/sexual violence, isolation and solitary confinement, lack of recognition of their identity, and other abuses," the report continues.

"In particular, transgender individuals in detention are frequently subjected to sexual abuse and harassment. They are also frequently housed based on their birth sex, rather than their gender identity, or are placed in solitary confinement, presumably for their own safety. Trans women in immigration detention have also reported many instances of invasive strip searches performed by male guards, which is in violation of ICE's own 2015 Transgender Care Memorandum," the report states, referring to Immigration and Customs Enforcement.

Okan Sengun, a gay man and attorney who is the executive director and co-founder of the LGBT Asylum Project in San Francisco, told the B.A.R. that he trusts the integrity of the "Surveying the Road to Equity" report.

"What I have reviewed seems in line with my own personal observations," Sengun wrote to the B.A.R.

Despite departing the White House next month, the Trump administration is continuing to promulgate hardline rules for asylum seekers. As the B.A.R. reported last week, on December 10, Human Rights Day, the administration published new rules forcing asylum seekers to claim asylum in countries they travel through to get to the U.S. in order for their claims to be accepted.

"If it's an executive order, I fully believe that Biden will overturn a lot of this stuff," Walker said. "If we're talking about legislation, we're talking about [Republican Senate Majority Leader] Mitch McConnell. But I have a feeling the Biden administration won't be as heinous."

(The two Georgia runoff races next month will determine control of the Senate, which could flip if both of the Democratic candidates win.)

The Biden transition did not respond to requests for comment for this story, but the president-elect has pledged a 100-day moratorium on deportations and has a plan available on his 2020 campaign website.

"The Statue of Liberty has long been a beacon to people 'yearning to breathe free' around the world — including asylum-seekers and refugees," the Biden plan states. "But the Trump administration has worked against this tradition to drastically restrict access to asylum in the U.S., including imposing additional restrictions on anyone traveling through Mexico or Guatemala; attempting to prevent victims of gang and domestic violence from receiving asylum; systematically prosecuting adult asylum seekers for misdemeanor illegal entry; and severely limiting the ability of members of the LGBTQ community, an especially vulnerable group in many parts of the world, from qualifying for asylum as members of a 'particular social group.'

"Biden will end these policies, starting with Trump's Migrant Protection Protocols, and restore our asylum laws so that they do what they should be designed to do — protect people fleeing persecution and who cannot return home safely," the plan states.

Biden's plan states he will stop the practice of limiting how many asylum applications can be accepted each day, "dramatically increase U.S. government resources to support migrants awaiting assessment of their asylum claims and to the organizations providing for their needs," reinvest in case management and end prolonged detentions, reverse the 2019 changes to the public charge rule, protect the Deferred Action for Childhood Arrivals (which was restored by a federal court December 4), and rescind the travel bans prohibiting immigration from some predominantly Muslim countries, among other actions.

Last month, Alejandro Mayorkas, the director of United States Citizenship and Immigration Services in the Obama administration, was nominated by Biden as his secretary of the Department of Homeland Security.

"I support the appointment of Alejandro Mayorkas to the DHS," Sengun said. "I think it's monumental to have the first Latino and the first immigrant lead the DHS and I congratulate him."

Sengun said that he is forward-looking about Biden's prospects for reforming the immigration system.

"My hopes for the incoming Biden administration is that he would immediately reverse Trump's draconian executive orders regarding immigration," Sengun wrote. "I am cautiously optimistic for the Biden administration and I would gladly circle back to this during his first 100 days."

But enforcement of U.S. immigration law promises to continue to be a source of division within the Democratic Party — with some migrants' rights groups calling for the abolition of ICE and amnesty legislation. President Barack Obama, of course, was labeled as "deporter-in-chief" after presiding over 3.2 million deportations, more than presidents George W. Bush and Trump combined.

"President-elect Biden is also committed to having an open dialogue with groups across a wide spectrum to ensure his administration is meeting the needs of the community," Jennifer Molina, a transition spokeswoman, told NPR.