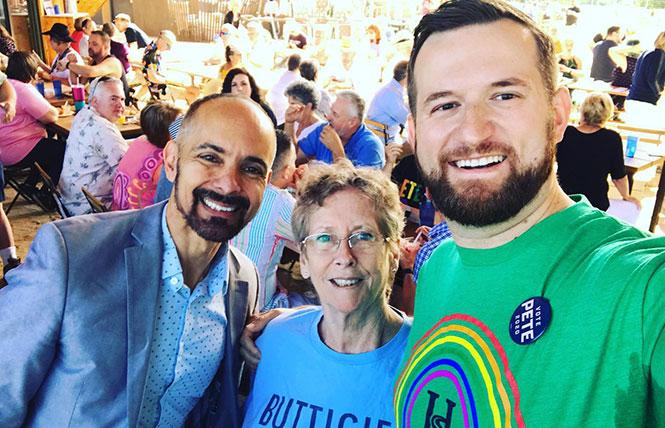 The Sacramento region said goodbye to three longtime gay elected officials this month, as the trio all lost their reelection bids in November. With the departure of a gay Stockton school board member, who also failed to secure a second term last month, California's northern Central Valley will have no out male local political leaders for the first time since 1987.

In 2005 gay West Sacramento Mayor Christopher Cabaldon came out during his State of the City address. The Filipino politician had won reelection until this year, bringing to an end his tenure as the country's longest continuously serving out politician.

Also falling short in the November election was gay Roseville school board member Gary Miller, who had served on the oversight body since 2008. His defeat ends a remarkable political run, as Miller had served on various school boards for 30 years and was the first out LGBTQ elected official in both Sacramento and Placer counties.

And Lange Luntao, a gay member of the Stockton Unified School District Board of Trustees, also left his school board this month having fallen short in his reelection bid.

Their defeats, and several out candidates who did not win their races on the November 3 ballot, came eight months after gay Sacramento City Councilman Steve Hansen lost his bid for a third term in the March primary. The first out LGBTQ person to serve on the council, Hansen's last day after serving eight years representing his city's gay neighborhood Lavender Heights and downtown district came December 15.

"That's a wrap! Last official public meeting completed," Hansen posted to his Facebook page Tuesday afternoon after his final council committee meeting ended. "All good things ... and all that jazz. Love to all of you and wishing you the best for the holidays and year to come."

According to the LGBTQ Victory Institute's map of elected LGBTQ officials, there are now only three out female local elected officials in the Sacramento region. All are up for reelection over the next two years.

"The part of this that sears the deepest is basically the erasure of GLBT representation in city, county, and school offices in the entire region, which is not how it is supposed to happen," said Cabaldon, whose mayoralty ended December 9 when he certified the results of his race. "We delude ourselves into thinking there is an inevitable march of progress forward. But that's not the case."

While he acknowledged the out women who are still in office — they include lesbians Sacramento District Attorney Anne Marie Schubert and Sacramento Municipal Utility District Director to Rosanna Herber, whose terms are both up in 2022, and pansexual American River Flood Control District Trustee Rachelanne Vander Werf, up for reelection next year — Cabaldon said the local LGBTQ community nevertheless will be at a disadvantage because of the dearth of out elected leaders.

"All the new LGBT candidates running, every single one lost," he noted. "My city is in good shape, and I left City Hall with my head very much up high. In terms of the LGBT community, it is is not where we should be. I am just disappointed in the electoral outcomes all over our region."

Hansen echoed that sentiment, also telling the Bay Area Reporter that the LGBTQ community can't take for granted that it always will have out elected representation.

"The community is pretty devastated," he said of the electoral results this year. "I think many people, when you have achieved a lot of progress like our community has achieved, want to assume it is going to last longer than it does. It is not necessarily complacency, more of a sense we have arrived. But every time we get comfortable, the world has a way of showing up and we have to remain vigilant. We can't take our progress for granted."

"If we give up our representation, we lose our ability to be at the table and fight for our family and kids in the authentic way we know how to do," he said.

Cabaldon, 55, told the B.A.R. he has no plans to run for mayor again in two years when the position will be back on the ballot. He is leaving California State University, Sacramento, where he has been a professor of public policy and administration, but will remain a partner at the consulting firm Capitol Impact.

"I don't have an announcement pending. I am taking the opportunity to sleep longer and more soundly," he said when asked about his future political plans. "I have been mayor for the vast majority of my adult life. ... Maybe I will do something different; I gave up a concert oboe career when I got into politics."

He leaves office having transformed his riverfront city, as the B.A.R. detailed in a feature story in its 2017 Pride issue. Not only did Cabaldon usher in a major redevelopment of his city, he also helped to diversify its leadership during his time in office.

"So few people know what their purpose is and to get a chance to accomplish it has been extraordinary," said Cabaldon. "For me, personally, and for the future evolution of the city, this is a welcome opportunity for a change."

Hansen, 41, has opened up a mayoral campaign account for a potential run in 2024 when Sacramento Mayor Darrell Steinberg plans to leave office but is unsure at this point on if he will end up seeking the post. In January, Hansen plans to announce what his new job will be.

When asked by the B.A.R. if he was interested in the executive director position with Equality California, where he worked for two years as its legislative director in the mid-2000s, Hansen said he hadn't thought about applying. The statewide LGBTQ advocacy organization's current leader, Rick Chavez Zbur, will be departing at the end of 2021 as he is running to be Los Angeles' city attorney on the 2022 ballot.

"I love Rick and think he has done an amazing job," he said. "It is a great job, but I don't know if I am the right person."

For now, Hansen is looking forward to spending quality time with his partner, Michael McNulty, and their son, Henry, whom the couple officially adopted last year. It marks the first time Hansen finds himself not working since high school.

"We would like to have another child. It is pretty difficult for these really demanding jobs in public service to have young children," said Hansen. "It is not impossible but it takes a toll on the family. That is where my heart and head are right now."

Last week, Hansen's staff and supporters heralded his time on the council during an hourlong tribute broadcasted via Facebook Live. It kicked off with a performance by Sacramento's gay men's chorus and wrapped with a drag performance to Deniece Williams's song "Let's Hear It for the Boy" by Taryn Thru-U, the alter ego of Sacramento performance artist Johnathan Cameron.

Amid the accolades and thank-yous from various local artists and leaders of community groups and civic organizations, one of the best segments was a sendup of the viral TikTok video of a skateboarder lip-synching to Fleetwood Mac's "Dreams" by lesbian restaurateur Andrea Lepore. Working with McNulty, she shot herself bicycling between Hansen's favorite eating establishments and eating and drinking his favorite items to order from each.

"It was very sweet and touching," said Hansen, who also released a commemorative artwork people can buy for $35 at https://amberwitzke.com/product/steve-hansens-art-print/ with all of the proceeds going to the Laurie McBride Scholarship at Sacramento State through the Stonewall Foundation of Greater Sacramento. McBride, a longtime lesbian leader in the Golden State, died December 4.

Hansen also released a report detailing all the accomplishments he and his office achieved during his two terms on the city council. His aim was to celebrate what he was able to do in collaboration with his constituents and community and bring them some joy in what has been a "brutal" year, noted Hansen.
"The goal was to help people feel proud about what they have been a part of and to commemorate all the things we were able to do," he said. "I hope people look to that body of work and are inspired to continue giving their heart and soul to the city of Sacramento."

At peace
Noting that every mayor in his region up for reelection this year lost their races, Cabaldon said he is "100% at peace" with his not winning a ninth consecutive two-year term as mayor.

"There was a much larger dynamic involved this year in local races in Northern California," he said.

In talking to the various local public officials who lost their reelection bids this year, Hansen said he has suggested they form a former elected officials group, as he noted many had faced "vicious campaigns" against them.

"Just because the public is a fickle lover doesn't mean the relationship ends. It transitions to a new phase," he said. "You don't stop caring about the place you called home or gave so much of your heart and soul to. It is also important to give our successors a chance to achieve their vision and to be successful in their own right."