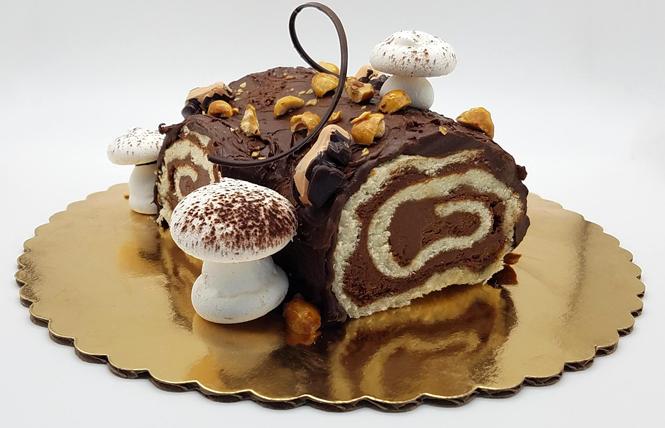 Castro chocolatier Carol Gancia has whipped up her own version of the traditional Yule log dessert for the holiday season inspired by the flavors and fauna of her home country the Philippines. The decadent six-inch rolled sponge cake treat is filled with kalamansi jam and chocolate mousse.

Edible frogs, meringue mushrooms, and caramelized hazelnuts decorate the log, officially called the Kalamansi Buche De Noel. It is available for pre-order, at $65, on her website for either local delivery or pick up at her store Kokak Chocolates at 3901 18th Street in San Francisco's LGBTQ neighborhood.

"I want to transport you to your earliest memories of chocolates with family and friends. Sharing chocolate treats for the holidays is a great tradition to continue with loved ones," said Gancia, 49, who is in the process of moving to San Francisco from Brisbane with her partner, Jasmin Ongsiako. "I am hoping to do that with people. Kokak is a nostalgic chocolate shop that is fun, approachable, and warm but beautiful also and very high quality. It is my way of reconnecting with my roots."

Kokak is the Filipino word for ribbit or a frog's croak. Gancia has fond memories as a child of her uncle returning from European trips with high-end chocolates to share.

"He always brought home amazing chocolates. To this day, he always has chocolate in his pocket," she said.

A successful documentarian and broadcast journalist in Manila, Gancia immigrated to the Bay Area in 2004 because her former partner wanted to move to the U.S. She established a video production company, Ripplemakers Inc., and worked as a producer on KQED's "Check Please! Bay Area" and "Jacque Pépin: More Fast Food My Way" for several years.

With a team of employees she trusts to handle the production business, Gancia in 2017 began making her own chocolates and selling them at local chocolate salons held throughout the year. She studied with fellow chocolatier Melissa Coppel in Las Vegas and veteran pastry chef Stacy Radin at the International Culinary Center in California.

"There is something special about gifting chocolate to loved ones and friends. I seek it out," said Gancia.

With the support of Ongsiako, who also grew up in the Philippines and owns her own Asian-inspired bakery, Binka Bites, in South San Francisco, Gancia decided to open up her own chocolate shop. Having spent much time in the Castro when she first arrived in San Francisco, Gancia knew she wanted to locate her business in the neighborhood. Because she also has a hot chocolate bar, she couldn't find a storefront she could afford and that was big enough on Castro Street.

She lucked out in landing the former bread shop on 18th Street at Sanchez, right across from the popular Parisian-themed Le Marais Bakery, and had hoped to open last year. But construction delays pushed back that timeline to March of this year, then the COVID-19 outbreak led to the cancellation of the city inspections she needed in order to open.

Coincidentally, Kokak opened its doors in June during Pride Month. By then, cooped-up residents who had been sheltering at home throughout the spring because of the pandemic were in need of a treat, noted Gancia.

"The Castro is a special place; I always say that to everybody. We didn't quite know what to expect as a small business just starting," said Gancia. "It was a great chance to meet our neighbors who were so supportive of Kokak Chocolates when we opened."

She started off with just six truffle flavors, some pastries, and hot drinks. Today, she is up to 21 truffle flavors and seasonal selections like the Yule log. She uses an heirloom cacao variety sourced from Ecuador that was thought to be extinct until a few surviving trees were discovered and propagated.

Many of her customers have become such regulars, popping in during their walks to try a different truffle flavor like a dark banana caramel or a white pineapple coconut, that they will offer Gancia suggestions on how to better utilize the space within her shop. She and several employees make all of her chocolates onsite.

"They feel I am just family," she said. "It is why I chose this place. It was the only open space back then, that is the reason why I knew it was going to feel like family and wanted to feel like part of something special."

Through her website Gancia ships nationwide and will make local deliveries. The store is open 11 a.m. to 6 p.m. Tuesday through Sunday and now offers curbside pickup. 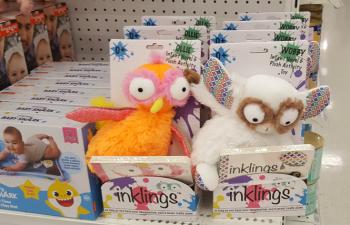 Children's books on target
In February, as concerns about the health crisis were growing, friends since high school Aimee Danchise and Alexis Mason decided to go forward with having a booth at the annual New York Toy Fair inside the cavernous Jacob K. Javits Convention Center in Manhattan's gay neighborhood of Hell's Kitchen. They were there to promote their children's books featuring whimsically odd plush creatures they call inklings, inspired by their love of the HBO program "Fraggle Rock."

A buyer for the retail chain Target stopped by and expressed interest in carrying the books and toys. The women sent him samples he could show to his colleagues, and in a matter of weeks, they learned they would be featured in Target stores across the country as part of a special promotion during the all-important holiday toy-shopping season. The books paired with the plush retail for $19.99.

"We were in shock. We were only being sold in two stores in New Jersey and all of a sudden Target is interested. It happened pretty quickly," recalled Mason, who is queer and authors the books. "It is just the two of us. We are both still in shock."

Mason, 39, whose title is chief content officer, wrote the first inklings book about Danchise's daughter Evie, who is now 3 years old. She paired her with Ollie the Oddball Oddbird. The fluorescent orange avian creature helps spark the toddler's imagination, reflected in the book by its pages progressing from black-and-white to fully colored.

Danchise, 38, the chief operating officer, assists Mason with the creative process for the books. There are two additional ones, "Sofia & Gus the Toothy Tusked Rus" and
"Billy & Wobby the Wild Eared Wala."

The fourth one will likely feature Gabe, the 1-year-old son of Danchise and her husband, Chris. Mason comes up with the storyline and writes the books, and then Danchise edits them and oversees the marketing for their Inklings Infant Novels company.

Danchise, who had worked in fashion, is now focused on the books fulltime, while Mason continues to do marketing for an insurance company in New Jersey, where the friends live and grew up. They convinced a pair of local stores to carry their inklings and were confident they would be marketable to a wider audience.

"We knew we had to go to the toy fair and get in front of people and that most people would get it," said Mason. "They are weird and quirky but who we are."

"I think for Aimee and I creatively that was always super important to us. All babies have different genders and family dynamics and racial backgrounds," she said. "It is important for there to be representation. Even if it is a baby in a little book, I think that matters."

In addition to teaching life lessons, Mason said she hopes the books and accompanying plush dolls bring kids and their families a bit of joy and fun.

"During the last four years it was a nightmare for most people. We just wanted to spread some positivity and acceptance as much as we could."

In the Bay Area, the books can be found at the Target stores in Alameda, 2700 5th Street, and Daly City, 100 Westlake Ctr.

To learn more about the inklings, visit https://www.inklingsbaby.com