Out in the World: North American corporations to help LGBTQ refugees 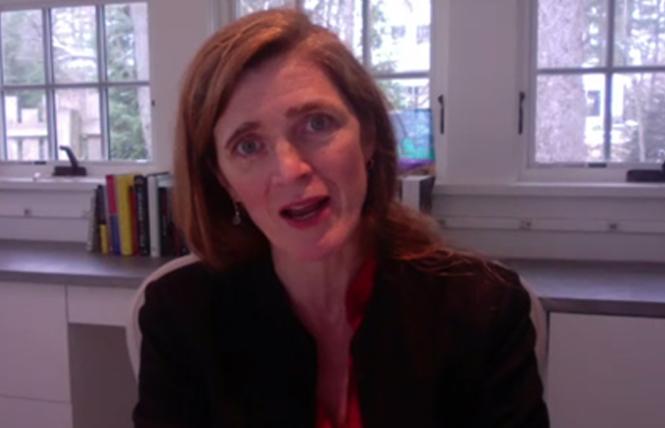 The Human Rights Campaign and Tent Partnership for Refugees have announced a new corporate mentorship program for LGBTQ asylum seekers and refugees in North America.

The news came at the first-ever North American Business Summit on LGBTQ Refugees December 8, which was held virtually and attended by nearly 400 people.

Former U.S. Ambassador to the United Nations Samantha Power announced the first 23 corporations committed to mentoring 1,250 LGBTQ asylum seekers and refugees resettling in the U.S., Canada, and Mexico during the next three years.

The companies will be paired with nonprofit partners to provide guidance working with LGBTQ newcomers.

Mentors for the program are being recruited from the companies' LGBTQ employment resource groups.

A resource tool, "How Companies Can Mentor LGBTQ Refugees: A Step-by-Step Guide," published by HRC and the Organization for Refuge, Asylum and Migration was also released Tuesday.

ORAM will be hosting a webinar that will dive deeper into mentorship for LGBTQ asylum seekers and refugees in early 2021.

The need
HRC President Alphonso David and Power explained to corporate leaders attending the summit that LGBTQ people are fleeing from many of the same crises afflicting other refugees in what's become the highest displacement of people in the world since World War II. At the same time, many countries have shut them out, especially over the last four years.

The difference, Power noted, is that LGBTQ people are more often persecuted. She pointed out that 69 countries around the world criminalize homosexuality; in nine of those countries gay people can be sentenced to death.

Despite some positive progress made within the last decade in the U.S. and around the world, even during President Donald Trump's administration, some countries have regressed on LGBTQ rights, she said.

She and David described some of the hardships many LGBTQ people overcome to get to a country where they will be safe.

"The amount of resilience and ingenuity, the motivation these people have ... the industry and commitment and creativity," David said. "These are the kind of people you want on your workforce. They will make invaluable contributions."

Aram Hassanlee is an example of the resilience of many LGBTQ refugees. The Iranian gay man fled his homeland due to its persecution of LGBTQ people.

In 2014, he arrived in Toronto. He did not know how to speak English.

On his second day in Canada, he walked into a TD Bank with his interpreter to open his first Canadian bank account. On the wall was a huge rainbow flag.

He decided at that moment he was going to work for TD Bank someday.

Today, he sits on the other side of the desk in the very office where he first opened his bank account, translating English into Parsi for other LGBTQ Iranian refugees at TD Bank.

Hassanlee's story has a happy ending, but it was not without putting in a lot of work and getting help from service providers.

Unfortunately, many LGBTQ asylum seekers and refugees who are traumatized by their experiences and alone in a new country struggle to gain footing.

"Persecution, discrimination, isolation, and lack of competent services keep many LGBTQ refugees and asylum seekers in the shadows," said David. "It impacts their ability to thrive here in North America.

"That is what we want to change," he said.

Ulukaya, an ally, is the founder and CEO of Chobani, the yogurt company.

Ulukaya is a Kurdish emigrant from Turkey. David is the son of Liberian political refugees who immigrated to the U.S.

The two men recognized that LGBTQ asylum seekers and refugees needed help, and that they also could be a valuable resource for companies.

Corporations could play a significant role in the solution smoothing the path to employment for LGBTQ newcomers.

Chobani scored a perfect 100 on HRC's Corporate Equality Index in 2020.

Published since 2002, the index ranks more than 1,000 corporations on LGBTQ inclusiveness. The index has gone international, now rating companies in Chile and Mexico.

Tent, founded in 2016 with Power's mentorship and the State Department's support, has mobilized more than 130 companies in the global business community to improve the lives and livelihoods of 30 million refugees.

"We have something to build on," said David, citing the $63 billion refugees contributed to the U.S. economy alone over the past decade.

The coalition of corporations and nonprofit organizations led by HRC and Tent is the embodiment of David's desire to figure out "how we can unleash the full economic potential of LGBTQ refugees."

"We are hopeful that this initiative can empower and support refugees and asylum seekers here in North America," he added.

Ulukaya said he was hopeful of what can be accomplished with the program.

At Chobani, employees represent 16 different nationalities and speak 19 different languages, Ulukaya said, noting that every day it is work for each employee to bring their authentic selves to the factory or office and work together. In the end, the rewards are greater than the challenges, he believes.

Ulukaya predicted the brands and companies of tomorrow will not just be out to make money, but to also make the "world a better place" and "contribute to society."

"Companies have a massive role to play" with creating a better world by being more inclusive, he said.

The shelter recently received a major grant and its nonprofit status from the IRS this year.

Nearly 100 asylum seekers and refugees have received shelter and 2,470 people have received services since the program was launched in 2018, said gay Nigerian Edafe Okporo, 30, who is the executive director of the program and a global LGBTQ activist.

He continues to work on LGBTQ rights in Nigeria despite being 7,000 miles away.

The center operates on an annual budget of $450,000 and is funded by private foundations and individual donors, he said.

In October, Okporo was awarded the prestigious David Prize that came with a $200,000 grant.

The David Prize is a new philanthropic award for New York City residents modeled after the MacArthur Grant.

He was one of five of the prize's first winners, reported the New York Times.

He told the Times that he plans to use the money for education about asylum seekers and refugee's housing issues.

Simon and Schuster will soon publish his memoir, "Asylum, a memoir and manifesto."

The shelter is in the basement of the Harlem church in New York. It has grown from a one-man operation to seven employees and programs offering food, clothing, and legal services in addition to the shelter, he said.

Okporo, who has a master's degree in nutrition, was a pastor and HIV/AIDS activist in Nigeria. He fled Nigeria to save his life because he is gay and advocated for HIV-positive people and LGBTQ rights, he said.

He continues to suffer from the trauma he went through, for which he is receiving help. Assisting other asylum seekers and refugees also helps him, he said, despite reminding him about his own painful experiences.

Okporo sought asylum when he came to the U.S. to attend the International LGBTQ Leaders Conference, organized by the LGBTQ Victory Institute, in Washington, D.C. in 2016.

Police arrested him when he requested asylum and took him to an immigration detention center in New Jersey, where he stayed for five and a half months until he was released with Immigration Equality's help.

Okporo had nowhere to go once he was freed. He was homeless, living on the streets, bouncing from shelter to shelter until a friend let him stay on her couch for three months while he got on his feet, he said.

At the church, Okporo pushed for the shelter program because he could not bear seeing other asylum seekers and refugees going through what he went through.

"I lost my country. I lost my language. I lost everything. I did not lose the sense of having sympathy and emphasizing with other people who are going through something difficult," he said.