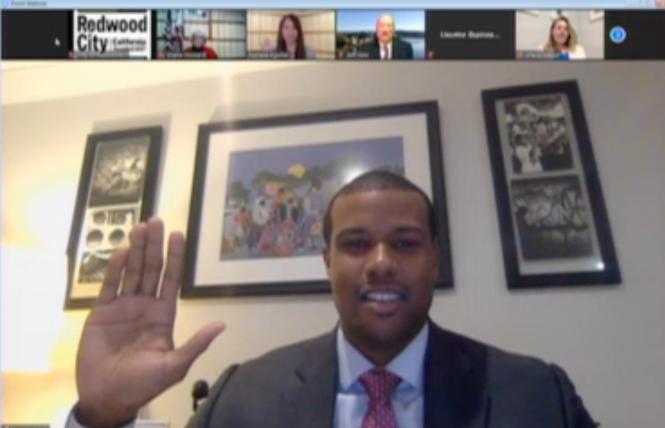 A trio of new out San Mateo County city council members, all young people of color, is set to bring a fresh perspective to how their municipalities are run in the coming months now that they have been seated on their governing bodies. They are also making political history as the first LGBTQ community members to serve on their councils.

Monday night Michael Smith, 36, a gay Black business entrepreneur, took his oath of office virtually to become the first District 4 council member on the City Council in Redwood City. He ran unopposed in the November election for the seat and had been serving on the city's planning commission.

"I commit my energy and time to uplift the voices of those left on the sideline," pledged Smith of his time serving on the council.

Joining him as the first District 3 council member is Lissette Espinoza-Garnica, 24, a queer Chicanx who is the Bay Area's first nonbinary elected councilperson having defeated a former councilwoman in their race. They were laid off from their preschool job due to the COVID-19 pandemic and have been serving as their grandmother's caretaker.

"I felt like my voice and the voices of my community were not being heard or being represented in our local government," said Espinoza-Garnica in brief remarks they gave in both English and Spanish after being sworn in during the December 7 council meeting.

The lack of affordable housing in the Peninsula city tops the agenda for both of the council people. Espinoza-Garnica called housing "a human right" and said having "a home should be guaranteed."

Their governing approach would "prioritize people not profits," said Espinoza-Garnica, and "reflect what our community truly wants and needs."

Smith said his actions would be guided by the experiences of a young Latinx woman he had mentored several years ago as she navigated her way through the college admissions process. She is now studying to be a social worker at UC Merced and left a lasting impression on him.

"I will always look back at our time together fondly, having learned a great deal," said Smith.

He pledged to be an advocate for the construction of more affordable housing in the city and the empowerment of its small business owners, as well as its young people so they could "reach higher heights" and live in a "more prosperous, more inclusive and better Redwood City for everyone."

Wednesday, December 9, James Coleman also virtually took his oath of office to become the first District 4 council member on the South San Francisco City Council, as the ceremony was rescheduled from Tuesday night to before this week's council meeting. Coleman, 21, who is bisexual, also defeated a former council member who had been serving as the town's mayor in his race last month.

Living at home currently, Coleman is taking his final exams he needs to graduate from Harvard in May with a degree in human developmental and regenerative biology. In a phone interview with the Bay Area Reporter this week, as his swearing in took place after the paper's Wednesday print deadline, he laid out his top three priorities as being police reform, expanding the city's pre-kindergarten program, and addressing climate change.

"It is something we could do in South City," he said.

Having decided to run for the council seat this summer in light of the protests against police killings of African Americans and upset with the lack of action the council members took on the issue, Coleman plans to push for the creation of a police oversight commission in his city. It would be tasked with analyzing police data and policies as well as addressing complaints against the department.

"It would also have the necessary power to fire problematic officers and make necessary policy changes to make sure the well being of the public is prioritized," said Coleman, who added when asked about securing its passage, "I think it is a very possible reality in the near future."

The city is part of a pilot program the county is implementing in the coming months where a number of cities are partnering mental health professionals with a police officer to respond to nonviolent emergency calls. Coleman expressed some misgivings about the continued dispatch of officers for such incidents.

"I do have some concerns that a police officer is still going to be on the site," he said, "but there are valid concerns that the mental health professionals might not feel safe."

A looming decision the council faces is what to do with its old library building, as the city built a new civic center that includes a new library. Coleman said he favors seeing the former library be turned into a new preschool center that could accommodate 300 students. With a four-year wait list already for pre-K slots, the city is nowhere near being able to offer universal preschool.

"That is an opportunity I really want to fight for in the city," said Coleman.

He also wants to see the city offer universal broadband internet service, especially so students will be able to have online access to do homework and work on class assignments.

"It is essential for people's day-to-day activities. I want to make sure everyone has internet access without worrying about its speed or affordability," said Coleman. "In high school, I knew friends who would go to Philz coffee everyday to do their homework to get internet access or would go to the library in the city."

Due to the retirement of a current council member this month, the council will also be deciding on how to fill the seat. No matter who gets picked for the vacancy, Coleman expects he will still be the most progressive councilperson.

"I definitely see myself as the left-most voice on the council," he said.