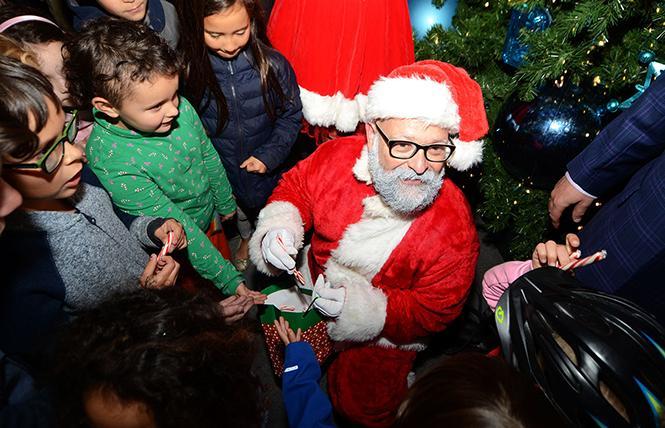 Santa stopped by the annual lighting of the Castro Merchants' holiday tree in 2018 to pass out candy canes to the children who were there. Photo: Rick Gerharter

It's looking increasingly unlikely that there will be a holiday tree or menorah lighting ceremony in San Francisco's LGBTQ Castro district, and there might not be a tree at all.

Masood Samereie, president of the Castro Merchants, responded to an inquiry from the Bay Area Reporter that cast doubt on a tree lighting ceremony this year. The artificial tree is normally assembled Thanksgiving week outside in the courtyard fronting the Bank of America building at the intersection of Castro and 18th streets.

It is usually lit the Monday evening after the annual holiday accompanied by performances from both the San Francisco Gay Men's Chorus and the San Francisco Lesbian/Gay Freedom Band, the city's official band. A Santa assisted by his sexy elves always makes an appearance, helping to kick off the all-important holiday shopping season for merchants in the gayborhood.

But this year, due to the health crisis that has severely impacted businesses in the Castro, large gatherings over the holidays are being strongly discouraged by local health officials, who on Tuesday announced another halt in the city's reopening plans and rolled back the allowance of indoor dining in restaurants due to a surge in COVID-19 cases and hospitalizations.

"The COVID pandemic has certainly changed the dynamic regarding any gatherings or events in the Castro, including the annual Christmas tree lighting ceremony," Samereie stated. "It has also given us cause to evaluate all programs to assure the money spent has the greatest impact while also being conscious of how each activity advances our goal of making the Castro the most vibrant, safe, and prosperous district in the city for business owners and residents alike.

"We continue to evaluate this program and will let everyone know when we have firm plans on how we are moving forward," he added.

Samereie was asked about having a holiday tree in the Castro with no ceremony, but he did not answer that question. Also unanswered was whether there would be a menorah in the Castro for Hanukkah. Last year that project was done by the Castro/Upper Market Community Benefit District and Congregation Sha'ar Zahav.

Andrea Aiello, executive director of the CBD, said that the Castro Merchants were organizing the project this year. During the business association's monthly meeting November 5, Cliff's Variety owner and former Castro Merchants president Terry Asten Bennett argued that "the Christmas tree should go up" even if done so without any fanfare this year.

Rabbi Mychal Copeland of the synagogue said Tuesday that a menorah was also unlikely to be unveiled this year at Jane Warner Plaza due to the pandemic. For several years now in December a menorah lighting ceremony has been held to celebrate Hanukkah in the public parklet on 17th Street at the corner of Castro and Market streets.