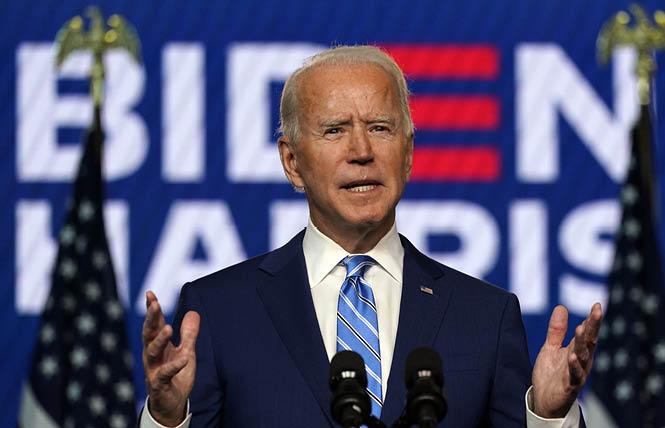 Democrat Joe Biden has been declared the winner of the presidential race. Photo: Courtesy AP

The Democratic former vice president defeated President Donald Trump (R), 273 electoral votes to 214 after CNN, MSNBC, and other outlets declared Biden the winner of Pennsylvania, which put him over the 270 electoral votes needed to win.

Arizona, Nevada, and Georgia remained too close to call, but Biden has been leading in all three. The Georgia secretary of state announced November 6 that there would be a recount there.

Biden's victory means that California Senator Kamala Harris will become the country's first female vice president, as well as the first Black woman and the first Indian American woman in the post.

Biden will address the nation at 5 p.m. Pacific Time. According to his campaign, he will be joined by his wife, Jill, and Harris and her husband, Doug Emhoff.

The announcement of Biden as president-elect came four days after the election, as mail-in votes continue to be counted. The large number of mail-in ballots was a result of the pandemic, as voters were urged to send them in or vote early in states that had such programs.

"I am honored and humbled by the trust the American people have placed in me and in Vice President-elect Harris," Biden said in a statement shortly after the race was called. "In the face of unprecedented obstacles, a record number of Americans voted. Proving once again, that democracy beats deep in the heart of America.

"With the campaign over, it's time to put the anger and the harsh rhetoric behind us and come together as a nation," Biden added. 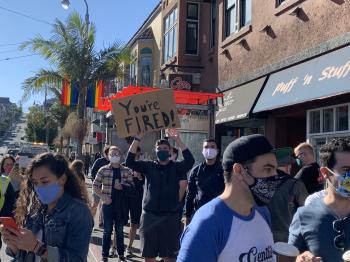 LGBTQ leaders were ecstatic at the news. Defeating Trump had been a top priority of queer organizations, which have criticized the Trump for years as he rolled back protections for LGBTQ people and spewed falsehoods about immigrants, minorities, and others.

"Just moments ago, it was announced that vice president Joe Biden and Senator Kamala Harris will become the next president and vice president of the United States of America," stated Imani Rupert-Gordon, executive director of the National Center for Lesbian Rights in San Francisco.

"By all accounts, this has been a historic election," she added. "Our democracy rests on the foundation that our leaders are elected by the people of this country and despite calls to do the contrary, we made the simple but powerful demand that we count every vote. They were counted. And the people have spoken."

California Governor Gavin Newsom (D) who will now get to pick Harris' replacement in the Senate, also issued a statement.

"This was the victory we needed to see to be the America we know we can be," Newsom stated.

"Joe Biden and Kamala Harris were the choice of a record number of American voters — and an overwhelming majority of Californians — because we know they will represent all Americans.

They will treat every person with dignity and deserving of equal opportunity," the governor added. "They will attack systemic injustices, not their fellow Americans. They will respect the rule of law and democratic institutions. They will elevate science and expertise and renew America's place of leadership in responding to global threats like COVID and climate change."

San Francisco Mayor London Breed said Biden "ran on the simple but powerful idea that we should strive to be a united country, not a divided one."

"With this election, we also made history by choosing Kamala Harris as our vice president," she added. "For the first time, millions and millions of Americans chose a Black woman to help lead this country. The pride I feel as a Black woman is hard to put into words. Kamala Harris is a friend and mentor, but most importantly, she is an inspiration to so many of us all across this country."

Oakland Mayor Libby Schaaf pointed to the historic nature of the Biden-Harris ticket.

"Today, America said yes: Yes to decency and compassion," Schaaf stated. "Yes to new leadership that elevates our values of diversity and inclusion.

"Yes to a Black, Indian American woman from Oakland, California."

"As a city, Oakland could not be more proud to see the fierce compassion and competence of Kamala Harris enter the White House," she stated. "Her historic victory arrives at a moment when our deeply divided nation needs her and Joe Biden's healing vision most."

Heavily LGBT precincts in the Castro neighborhood of San Francisco and in the popular LGBTQ vacation town of Provincetown, Massachusetts showed 91% or more voters supported the Democratic ticket of Biden-Harris. Support for Trump ran between 2 and 8%.

In the heavily LGBTQ town of Wilton Manor, Florida, support for Biden ran between 79 and 82%; Trump support there fell between 17 and 19%.

In five heavily LGBTQ neighborhoods in Philadelphia, Biden won between 84 and 92% of the vote.

Exit poll data from the National Election Pool, used by the New York Times and the major television networks, indicated that, among about 1,100 voters who self-identified as LGBTQ, only 61% supported Biden, 28% supported Trump.

The two sets of data were collected very differently, and both could be showing a fair picture of the LGBTQ vote.

The exit poll data has the benefit of collecting a wide sample of LGBTQ people, not just those who live in heavily LGBTQ neighborhoods. It may suffer from the reluctance of LGBTQ voters to share personal information to a stranger who approaches them outside a voting place in their neighborhood, which may not be heavily LGBTQ or friendly.

Alphonso David, president of the Human Rights Campaign, which endorsed and worked for the Biden-Harris victory, praised the win Saturday morning, saying, "The future of our democracy and the quest for equality is bright."

"Trump, [Vice President Mike] Pence and anti-equality forces left us with unlawful and regressive policies that have stripped away protections marginalized communities have had for years," said David.

While acknowledging there will be much hard work ahead, David said Biden and Harris are "not just willing to be our allies, but they are true advocates for equality."