Out in the Bay: HRC: 'The most important election of our lives' 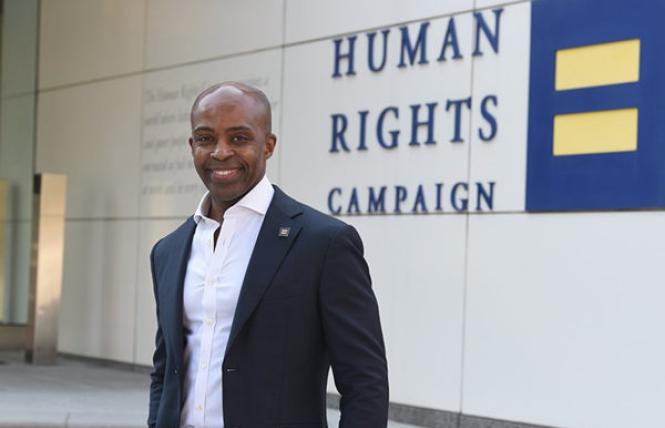 "We are fighting for our lives," says Human Rights Campaign President Alphonso David, an eloquent, passionate speaker. On this week's Out in the Bay radio program and podcast, to be rebroadcast Saturday, October 10, on SF Public Press radio station KSFP, David shared advice given to him personally by the late U.S. Supreme Court Associate Justice Ruth Bader Ginsburg.

"She said, 'Alphonso, do everything you can to protect and ensure the right to vote. It is the most important thing,'" David said. "We're all still mourning her loss, but she left us an incredible legacy of fighting for LGBTQ people, for women, for marginalized communities, and making sure that our Constitution is actually reflective of what it should mean — equal justice for all.

"Those words still haunt me, because I see this election as being the most pivotal election of my lifetime," David continued, "and I want to make sure that we do protect and ensure the right to vote for everyone to make sure that their voices are heard."

HRC's website calls the current general election "the most important election of our lives." Motivating people to actually vote, say the HRC and other LGBTQ organizations, is critical.

HRC is trying to mobilize 57 million voters nationwide it identifies as "equality voters," not all of whom are LGBTQ, said David, but "who prioritize equality issues at the ballot box." Ten million of them, he said, live in crucial swing states.

Equality California's deputy communications director, Josh Stickney, also speaking on Out in the Bay, reinforced the need to get out the vote. Despite a 2019 UCLA Law School study which found that nearly 20% of LGBTQ adults nationally were not registered to vote, he sounded hopeful.

"About one in eight registered voters in California identifies as LGBTQ, which is astonishing," said Stickney. "That's a huge voting bloc in the world's fifth-largest economy." He said young people especially are "sick of" Trump administration attacks on LGBTQ and other marginalized communities and on voting access for those groups, and are taking action.

"If the general election this year is anything like this year's primary, or the 2018 election where we saw huge numbers of young people and huge numbers of LGBTQ people voting, then I'm encouraged," said Stickney.

While most attention is focused on national races, local and state elections have a crucial impact on our daily lives — especially in California, where voters determine not only office-holders but also public policy through ballot initiatives.

Hear more from Alphonso David and Josh Strickney on the importance of the election - including how to register and help get out the vote in swing states - on this week's Out in the Bay-Queer Radio from San Francisco. It will re-air at 9:30 a.m. Saturday, October 10, on KSFP 102.5 FM in San Francisco only, and is available anytime on Out in the Bay's

Eric Jansen is managing producer and host of Out in the Bay — Queer Radio from San Francisco. Learn more and listen at www.outinthebay.org