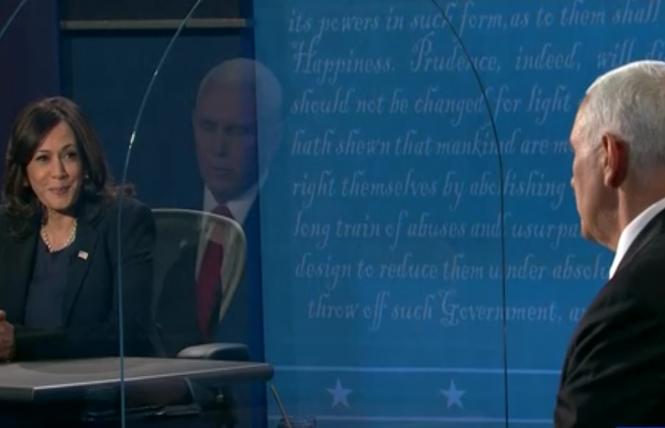 Taking a cue from his boss, Vice President Mike Pence blamed China for the coronavirus during his only debate with Senator Kamala Harris, the Democratic vice presidential nominee.

"With regard to China, it is to blame for the coronavirus," Pence said during the debate Wednesday night at the University of Utah in Salt Lake City. He added that the Chinese did not provide timely information on the virus, which started there and spread around the world.

The debate was not as contentious as last week's between Trump and Democratic nominee former vice president Joe Biden. But Pence repeatedly defended the president and Harris stuck up for Biden, as expected of a vice presidential candidate.

As with the first debate, there were no questions on LGBTQ issues from moderator Susan Page of USA Today.

Continuing the discussion on China, Harris said, there's a "weird obsession Trump has with getting rid of any accomplishment of [Barack] Obama and Biden."

"There was a team of disease experts that Obama and Biden dispatched to China," she said, referring to other outbreaks. "They pulled them out. We're now looking at 210,000 Americans who've lost their lives" to COVID-19.

The virus and health care were a focus of the debate. Harris charged that under Trump, "the American people have witnessed the greatest failure of any presidential administration in our history. Frontline workers are treated like sacrificial workers. On January 28, 2020, the vice president and president were informed that it's lethal, airborne, and affects young people.

"And they knew what was happening and they didn't tell you," she added. "They knew and they covered it up. In spite of that, today they still don't have a plan. Joe Biden does."

She said that if elected, a Biden administration would undertake contract tracing and the vaccine would be "free for all."

Pence was asked about his attendance at the September 26 White House event where Trump introduced his Supreme Court nominee, Judge Amy Coney Barrett. It's been reported that may have been a so-called super spreader event as many people have since tested positive for the virus.

Pence replied that it was an outdoor event. But in fact, there were receptions held inside that day as well, which he did not mention.

Harris said that if doctors determined a vaccine was safe, she would be "the first in line" for it.

Pence said Harris was "undermining confidence in a vaccine."

"Donald Trump is now in court trying to get rid of the ACA; people will lose protections for pre-existing conditions."

Pence said that "Obamacare is a disaster. President Trump and I have a plan to improve health care and protect pre-existing conditions." He did not provide any information about that plan.

Taxes and the economy illustrated another sharp division between the candidates. Harris said that Biden would repeal Trump's tax cuts, which mainly benefit the wealthy, and would not raise taxes on anyone making less than $400,000.

Asked whether he believed in climate change, Pence said, "The climate is changing."

Neither candidate answered a question about what they would want their states to do if the Supreme Court overturned Roe v. Wade and return abortion law to the purview of the states.

Pence said that he and the president are "enthusiastic" about Barrett's nomination and hopes there aren't "attacks on her Christian faith" that occurred during Senate confirmation hearings in 2017 when she was nominated for a federal judgeship. (Democratic California Senator Dianne Feinstein, a member of the judiciary committee, made a comment to Barrett about "The dogma lives loudly within you," which Republicans took as an attack on Barrett's Catholic faith.)

"Joe Biden and I are both people of faith and it's insulting we would knock anyone because of their faith," Harris shot back. "Joe Biden would be the second practicing Catholic [president]."

Harris would not answer a question about court-packing. She and Biden have been under some pressure to respond to calls by other Democrats who have advocated expanding the Supreme Court if Barrett is confirmed.

Criminal justice was also brought up during the debate. Page mentioned the Breonna Taylor case, in which the young Black woman was shot by Kentucky police during a botched no-knock raid on her home. A grand jury recently declined to offer indictments for the officers specifically regarding Taylor's death. One officer was indicted for firing shots into other apartments.

"We always must fight for the value we hold dear," Harris said. "Bad cops are bad for good cops. Joe Biden and I will immediately ban chokeholds, require a national registry for police who break the law, decriminalize marijuana."

As for Pence, he said he'd always trust law enforcement.

"Our heart breaks for loss of any innocent life," he said, referring to Taylor. "But I trust our justice system. Regarding [George] Floyd, there's no excuse [for] what happened. But there's also no excuse for rioting and looting that followed. We'll always stand with law enforcement and improve lives of African Americans."

Harris wasn't having it.

"I will not sit hear and be lectured by the vice president about enforcing laws of this country," she said, noting that she's prosecuted murderers, child molesters, big banks, and others during her career as San Francisco district attorney and California attorney general. "Last week, Donald Trump refused to condemn white supremacists. He then doubled down, 'Stand back, stand by.' This is a part of a pattern of Donald Trump's. He called Mexicans racists and criminals. In Charlottesville [Virginia], there were racial epithets and racial slurs. He said, 'fine people on both sides.' America, you deserve better."

Pressed by moderator Chris Wallace at last week's debate to name one racist organization he could condemn, Trump cited the neo-fascist group Proud Boys, but told them to "Stand back and stand by."