Transmissions: Ginsburg, Barrett, and why this election matters 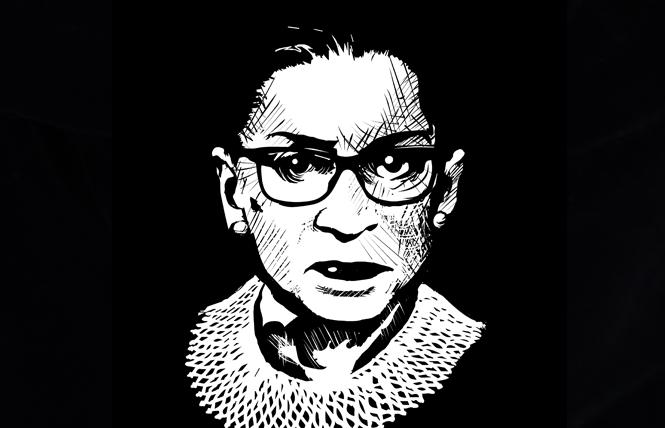 In the last few decades, this has very much been the case. Under George W. Bush, Dick Cheney's Office of the Vice President was a powerful one. Sometimes, it felt more like Cheney was in charge of things, versus Bush.

During the Barack Obama years, too, Vice President Joe Biden often wielded a lot of executive power. On many controversial topics, such as transgender rights, it was Biden who would "test the waters," pushing the conversation forward in ways the president could not. Further, many other departments pressed on rights issues independently of the president, such as the Department of Education pushing guidelines for trans students, or the Department of Housing and Urban Development pressing for trans-friendly shelter policies.

Of course, Donald Trump's presidency has largely been dedicated to rolling back every good thing that occurred in the Obama presidency, with transgender rights being very much in the crosshairs. While Trump has also been much more at the forefront of his administration versus some of his predecessors, it is very clear that it is religious conservatives like Vice President Mike Pence and individuals like Roger Severino, head of the Department of Health and Human Services Civil Rights office, who are far more involved in anti-trans policies than Trump.

Yes, this in spite of the fact that is was Trump himself, via a tweet, who announced the ban on transgender members of the military.

The administration is but one of three supposedly equal branches of government, though you'd be hard pressed to tell that from the current makeup of Congress — Democrats control the House but Republicans are the majority in the Senate — plus the current status of our judiciary. The latter is where it gets murkier.

With a Senate that has largely served to rubber-stamp right-wing judges recommended by the White House, the makeup of the courts has grown increasingly conservative. This has been in play at the Supreme Court as well, with Neil Gorsuch being given the seat to which Merrick Garland had been nominated under Obama, and with Trump's appointment of Brett Kavanaugh.

The Supreme Court is a big deal. While a presidential administration may only serve for two four-year terms, a Supreme Court appointment is for life. One could serve for decades, having a hand in shaping the interpretation of the laws of this country for generations.

Such was the case with Associate Justice Ruth Bader Ginsburg.

Appointed to the court in 1993 by President Bill Clinton, Ginsburg served for two and a half decades, putting a stamp on many of the court's biggest rulings. That said, she had very few chances to be a part of many specifically trans-focused cases.

She was part of a 9-0 decision in Farmer v. Brennan in 1994. While it was primarily focused on prison rights, the fact that Dee Farmer was a trans woman and was sent to a high security facility where she faced sexual assault at the hand of a cellmate is highly relevant to the case.

Then there was Doe v. Boyertown Area School District. In 2019, the Supreme Court declined to hear that case, keeping in place a 3rd U.S. Circuit Court of Appeals decision that Title IX applied to transgender students and use of gender-specific facilities.

Finally, she was part of this year's Bostock v. Clayton County, a decision that included R.G. & G.R. Harris Funeral Homes Inc. v. Equal Employment Opportunity Commission. In a 6-3 decision, with Ginsburg siding with the majority, the court found that discrimination based on sexual orientation or gender identity is part of discrimination "because of sex" under Title VII. It's a ruling where the repercussions are still being felt.

While the number of trans-specific cases Ginsburg was a part of is relatively small, her role in them is important. Add to that her voice in so many gender, LGB rights, and other cases that have repercussions in trans lives, and her importance is clear.

Ginsburg died last month, giving the Trump administration, especially the religious conservatives, a chance to move the Supreme Court to the hard right for some time. In doing so, Trump nominated federal Judge Amy Coney Barrett.

Unlike Ginsburg, Barrett is a conservative voice. As just one example — as she has a very short judicial career to examine — Barrett has argued against transgender rights under Title IX, the very thing that was addressed in Doe v. Boyertown Area School District, going so far as to refer to trans women as "physiological males."

Under Ginsburg, we saw a big Title VII win in Bostock v. Clayton County, but a Supreme Court with Barrett would certainly attempt to do end runs around that decision in the name of religious freedom. I would expect she would do all she could from the bench to roll back even the slightest victories LGBTQ people have had.

Her nomination has been thrown into a bit of chaos thanks to COVID-19, but it is still plenty possible that she could end up on the Supreme Court prior to the election.

Under Trump, his administration has pushed hard for the demolition of transgender rights. Barrett may well make that happen.

Gwen Smith just wants to live her life as the woman she is. You can find her at www.gwensmith.com