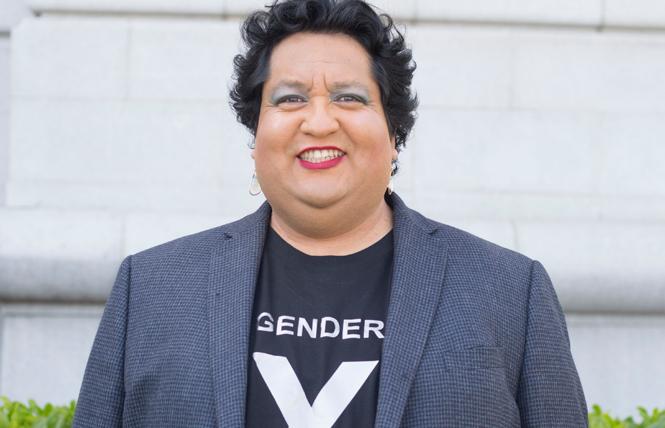 The inaugural manager of the Castro LGBTQ Cultural District told the Bay Area Reporter that they are ready to listen to the neighborhood's concerns, just as the district finally filled out its advisory board.

"I don't want to come into this saying 'I know the answer,'" Tina Valentin Aguirre, 52, who identifies as a genderqueer Latinx person, said in a phone interview. "I need to learn so much in the first few months. I need to learn the concerns of small business owners, nonprofits, and other community stakeholders, as well as community groups who don't have a space."

But that doesn't mean Aguirre isn't clued into the changes the area has seen since they first moved in over 30 years ago.

"I've lived in my flat since 1987," Aguirre said. "I've been a renter since then in the 94114 ZIP code and I've seen it change drastically. There's a lot to celebrate, preserve, and make space for in the Castro and I'm so excited for this work. I think the rents have gone up astronomically, which has changed the culture of the neighborhood. Who can afford to live here? That's the biggest thing."

Aguirre moved into a neighborhood they said was filled with artists and activists who have since been priced out to the East Bay "or farther."

They said they've been lucky enough to be able to stay, and have used that time working for the Lavender Youth Recreation and Information Center, or LYRIC, and the Shanti Project, and serving on the board of the GLBT Historical Society.

Gay District 8 Supervisor Rafael Mandelman told the B.A.R. that he is excited about the choice of Aguirre, who is expected to start the new job October 9. The salary for the full-time job was advertised at between $75,000 and $79,000.

As the B.A.R. previously reported, the city designated the Castro neighborhood as a cultural district last year. Cultural districts are areas where communities and the city work together through zoning regulations and city planning to safeguard a particular heritage within a specific set of boundaries. One reason for the districts' existence is to offset some of the effects of gentrification.

San Francisco's first cultural heritage district was formalized in 2014 in the Mission along 24th street. The Castro is the city's third specifically LGBTQ cultural district, after the Transgender District in the Tenderloin and the Leather and LGBTQ Cultural District in the South of Market neighborhood.

The city is also home to SOMA Pilipinas (a Filipino cultural district in the South of Market neighborhood) and the Japantown Cultural Heritage District in the Western Addition.

As the B.A.R. previously reported, the Castro district has been having elections to fill its board of directors intermittently since December.

The final five members of the board were elected September 19: Ce?ar Cadabes, Carnell Freeman, Corey Fusco, Levi Maxwell, and U. Sacred Mitchell.

The B.A.R. had the opportunity to speak with Aguirre and to correspond with Freeman, Fusco, Maxwell, and Mitchell. All discussed their concern over gentrification, their thoughts on how the Castro can recover from high rents, COVID-19, and racial inequalities in the neighborhood.

Offsetting gentrification
The much-discussed COVID-19 exodus out of San Francisco has brought rent prices to their lowest since at least 2014. Nonetheless, the median rent for a one-bedroom apartment in the city is $2,353 according to ApartmentList - which is more than double the national average - and a number of Castro merchants have gone bust since the decline of business due to the pandemic.

Aguirre said they hope to gather information from people in the community and submit it in a report to the mayor's office.

"I hope that will lead to policies and funding," Aguirre said.

Freeman's main proposal is a monthly outdoor block party that would "highlight a specific community and culture," and would reinvigorate the neighborhood.

"For example, we could do a Black celebration month, a trans month, an Asian month, a circuit month, a youth month, a lesbian month, a Latino month, etc.," Freeman wrote. "Each month would focus on those communities and cultures with food vendors, community outreach organizations, and small business owners selling arts and crafts and other items. And, of course, there will be a stage with performers and speakers. ... I strongly believe we need to make the Castro fun again. If our community members have more reasons to come to the Castro, then businesses, renters and homeowners will want to be there."

"Castro, in essence, has become this sort of Disneyland for affluent gays and out-of-towners. It's become a weekend party destination, and the businesses that cater to this can attest to that," Fusco wrote. "We have lots of late night eats spots, but why not a thrift shop? Or more sober nightlife spots that can include LGBTQ youth? I hope to work with the city to reconsider zoning regulations to make the Castro not the rainbow amusement park that it's being played off as, but a center of diverse and beautiful people and businesses that people want to invest in."

Maxwell wrote that "forming collectives, rebranding and working with the force that is queer nightlife and queer nightlife entertainment can mitigate some of the challenges we face."

"I believe the best way we increase traffic and have a surge of new energy is to support the next generation of people who historically have not been present as business owners in the neighborhood," Maxwell stated.

Mitchell wrote that "community advocates, leaders, and business owners" should join with the Castro/Upper Market Community Benefit District and health care professionals to "brainstorm cost-effective and creative solutions that could ensure the survival of the current small businesses in the Castro neighborhood, bring in new ones to fill vacant commercial spaces and, furthermore, keep out big chains or corporations who seek to do business without fulfilling any sort of social responsibility to the area."

Recovering from COVID-19
Aguirre was pleased at the fact that "some permitting issues are being eased up," due to Mandelman's efforts, to allow businesses to operate in spite of the COVID-19 pandemic.

"But more than that, I need to ask 'what are the possibilities?' Aguirre said. "My hunch is that many investors in the community will be able to step up support and if we could secure that it would help with this challenge."

Freeman stated the monthly block party would help businesses and organizations recover after the pandemic and "help bring business back to the Castro." Maxwell wrote that the pandemic presents an opportunity for the neighborhood to recognize what it already has.

"Due to COVID, the neighborhood cannot expect the revenue that tourists once brought, but if the neighborhood can get behind seeing who all are still here and are willing to invest in this space; time, intention and a coin or two, with some guidance, an era can come about that can make this neighborhood truly a kaleidoscopic window of queer expression, talent, and taste," Maxwell stated. 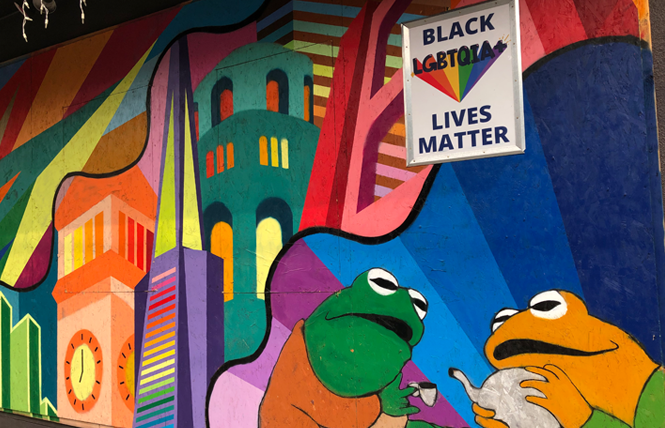 Racial inequity
Though the Castro's dance floors may be empty, its streets are not - and they are not just filled with outside dining and happy hours. The police killing of George Floyd in May brought renewed attention to racial inequalities in the United States and a number of demonstrations against police violence and racism took place in the Castro, as the B.A.R. previously reported.

After speakers at a June protest on Jane Warner Plaza discussed racist attitudes in the Castro, a number of nightlife figures founded the Bay Area Queer Nightlife Coalition and hosted a four-hour town hall on the topic.

When asked about racial inclusivity, Aguirre said that "I think 'inclusive' is only part of it."

"I think the bigger core issue is racial equity, and what does that look like? Using a racial equity lens in cultural and historic preservation," Aguirre said. "Making sure history and culture reflect racial equity in real ways. I think that the plaques that line the Castro [the Rainbow Honor Walk] are reflective of people I look up to, who we all look up to. They include the Empress Norton, a queer Latino man; We'wha, a two-spirit Native American; several key people of color; and trans and women figures. For me, I don't know we would have had that in the 1980s or in the 1990s.

Freeman wrote the block party is a good way to celebrate the diversity of the queer community.

"I believe we can help bridge communities and cultures, help generate revenue to Castro businesses and help make the Castro district a regular destination for members of our community," he stated. "These monthly events would help focus on arts and culture, economic development and racial equity."

"I proposed as a community member at the BAQNC town hall having a business 'certification' for following through on making their spaces safe and inclusive for all their patrons," Fusco stated. "This could be presented as either a sign or sticker the business could display in their window to signal that they're taking the necessary steps to show they are invested and care for the people around them."

Maxwell wrote that "the call for racial inclusion and racial equity in the Castro is not new. It is as old as the neighborhood itself. The difference is now more white people are listening," pointing out past protests against Badlands and Toad Hall.

Natali later opened Toad Hall on the site of what had been the Pendulum, which catered to Black patrons.

In a June email, after the Badlands issue was brought up at the protest in Jane Warner Plaza, Natali wrote that the allegations "were found without merit and were dropped."

"This ain't new and I won't humor that thought," Maxwell stated. "By grounding racial equity and racial inclusion work with an economic strategy, finding spaces to open and bringing in everybody, trusting leadership in faces that may not seem too common and actively engaging in a ground-up approach of accountability and sustainability, I have hopes that the wrongs around us, that have been passed on from generation to generation, can be made right."

Mitchell, who spoke at the Jane Warner Plaza rally, said diversity is not enough but that "it's key to not only allow, but welcome, seek out, and recruit unapologetic members of these communities of color."