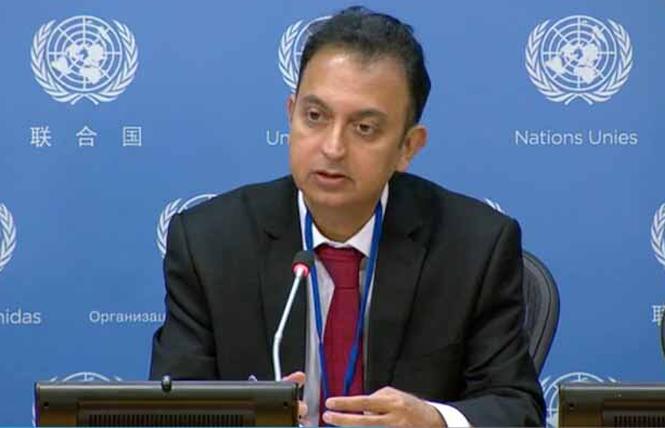 Javaid Rehman, a special rapporteur on the situation of human rights in Iran. Photo: Courtesy of Iran Human Rights Monitor

LGBTQ Iranians face widespread violence, according to a new report critical of the Islamic Republic's human rights record that renew attention to its violence against gays, including executions of gay men.

The latest report, "Hidden Wounds: A Research Report on Violence Against LGBTI in Iran," published by 6Rang September 16, takes a more personal look at violence against Iranian LGBTQ people through an in-depth survey that saw 230 queer Iranians speak out anonymously.

The report follows a harsh rebuke and report from the United Nations. That was followed by a German intelligence agency's report on executions of gay and lesbian Iranians published in June.

Homosexuality is illegal for both men and women in Iran and can result in punishment ranging from lashings to the death sentence.

A British WikiLeaks cable in 2008 estimated between 4,000 and 6,000 gays and lesbians have been executed by Iran's regime since the Islamic Revolution in 1979, reported the Jerusalem Post.

The Post stated that since 2008, Iran's executions of gays and lesbians have continued to go "unabated" at a high rate, according to the German intelligence report.

Iran has been criticized globally by LGBTQ and human rights organizations for more than a decade on the issue.

"Generally, police in Iran attack anyone whose behavior, mannerisms, interests, appearance, or expression is slightly different to the majority," Aram Bolandpaz, an LGBTQ activist and journalist at Iran International TV, told Curve magazine.

In January, the Post was the first to publish a report about the execution of a 31-year-old Iranian man found guilty of violating Iran's anti-gay laws.

Iran supports and funds gender reassignment surgery, which is also controversial within the LGBTQ Iranian community.

The report
6Rang's 30-page report found that structural and social violence against LGBTQ Iranians is widespread and a common experience. A majority of incidents go unreported.

Violence against LGBTQ Iranians is perpetrated by family members, intimate partners, friends and colleagues, political institutions, and society, making it difficult if not impossible to escape.

A majority of LGBTQ Iranians in the 6Rang report did not want to report assaults. Nearly three-quarters of the time, 68% of the participants reported they "rarely" if "ever" have or will seek assistance from the judiciary, 6Rang stated in a September 16 news release announcing the publication of the report.

"The results of this survey show that sexual violence and abuse in the family and in public spaces, workplace and educational settings are usually silenced without punishment and accountability for the perpetrators," 6Rang Executive Director Shadi Amin said in the release. "This community is even more deprived of the protection of the law and the judiciary than women, and conversely, if they go to the police, they can be subjected to compounded violence because of their sexual orientation or gender identity, or face criminal charges."

According to the report, nearly 63% of the respondents reported having experienced violence perpetrated by their family, extended family members (38%), partner (more than 20%), and friends or classmates (49%).

Outside their home, 52% reported experiencing violence in public spaces.

One unidentified participant told the researchers he and his boyfriend were arrested in a car. "They told us, 'What are two boys with such an age difference doing at this time of the night?' They took us to the police station and called our parents. After that, I could not see my boyfriend," the man stated in the report.

Iranian LGBTQ participants responded to the extensive online survey over a three-month period starting in November 2019.

The survey was distributed online and through social media.

Researchers examined the respondents' answers as well as conducted some comparison with the organization's previous studies about the LGBTQ Iranian experience for the report.

UN criticizes Iran
In March, Javaid Rehman, a special rapporteur on the situation of human rights in the Islamic Republic of Iran, blasted the Islamic country's leaders before the U.N. Human Rights Council in Geneva, Switzerland for continuing to harshly punish gay people with death under Islamic law, reported the Post.

In June 2019, Iran's Minister of Foreign Affairs Mohammed Javad Zarif responded to gay German journalist Paul Ronzheimer's question, "Why are homosexuals executed in Iran because of their sexual orientation?"

He justified the death penalty for homosexuality as "moral principles" held by society.

Rehman cited the quote to the council.

"The report is far from a faithful reflection of Iran's continuing progress in human rights performance," Hamaneh said, reported the Post.

Reasons to leave
The violence and the constant fear have been reasons enough for many gay Iranians to leave the country.

"Everyday LGBTQIA Iranians live in daily fear of punishment simply for being who they are," Bolandpaz told Curve. "In Iran, I was not given a choice about my own identity. Instead I felt the need to conform to a lifestyle which I did not feel connected to."

Neither did the late award-winning Iranian-born gay photojournalist Shahin Shahablou, 56. The violence was enough to cause him to flee Iran. He moved to the United Kingdom in 2011.

He became a grocery store clerk and found the love he was searching for when he resettled in London as an Iranian refugee.

6Rang researchers made recommendations in the report.

It urged international organizations to increase pressure on the Iranian government to change laws criminalizing LGBTQ people and bring perpetrators of violence against queer people to justice while protecting them without perpetuating violence.

The researchers advocated for media outlets to pay attention to the widespread violence against LGBTQ Iranians, become educated and sensitized, and report on the Iranian LGBTQ community's issues to give them a voice.

It was a part of the country's call to "end discrimination in all forms" and to align the country with international human rights laws.

Mason expressed the desire to rid the nation of its homophobic image.

In 2019, Barbados ranked as the eighth unsafe country for LGBTQ travelers to visit on the "LGBTQ+ Danger Index" published by Asher & Lyric travel blog.

The island has a tourist-dependent economy.

In July, Prime Minister Mia Mottley announced same-sex couples would be welcome to participate in the island's Welcome Stamp program, which opened the doors to foreigners to live and work in Barbados during the global pandemic.

Mason's announcement, however, was drowned out by another call to action to ditch Queen Elizabeth II as head of state and establish a Barbadian head of state during the same speech that went viral around the world. (Barbados is a member of the British Commonwealth.)

Mason was appointed by the queen as head of state of Barbados, but she did not write the speech. Mottley's government wrote the speech Mason delivered, reported Gay Star News.

The Cayman Islands failed to remove Section 81 from its new constitution, losing its bid for autonomy from the United Kingdom September 18, reported the Cayman Compass.

Many LGBTQ Barbadians are skeptical of the government's plans, they told Reuters. They do not believe the island nation is ready to vote on same-sex marriage when being gay is still illegal.

Barbadian transgender activist Alexa Hoffmann told Reuters "anything that relates to the LGBT community physically being able to practice that relationship is still criminalized and completely forbidden."

She, like others who are also pessimistic about Barbadians voting on same-sex civil unions, bet it will be no vote.

They believe there is more work that needs to be done to achieve equality.

Michael Rapley, who is head of Equals, a Barbadian LGBTQ rights organization, warned against putting same-sex marriage to a public vote.

"I do not think a referendum on gay marriage is wise at this moment," he told Reuters.

He preferred that the government decriminalize homosexuality and legalize same-sex unions first. He believed that would give Barbadians time to get used to the idea before putting same-sex marriage up for a vote.

In 2018, the Inter-American Commission on Human Rights Court mandated that all Latin American and Caribbean countries that have not legally recognized same-sex relationships do so.

Same-sex marriage is legal in Argentina, Brazil, Colombia, Ecuador, Uruguay, and some states in Mexico. Legislation is pending in Bolivia, Chile, El Salvador, Honduras, and Panama.

Same-sex marriage bans are pending in Haiti and Guatemala.

A date has not been set yet to put same-sex marriage on the ballot.

Barbados' Sexual Offences Act is already being challenged by LGBTQ petitioners at the IACHR Court.

Mottley's ruling Labor Party might act before the IACHR Court rules on the petition.

"My government will do the right thing, understanding that this too will attract controversy," said Mason in the speech.

"Equally, it is our hope that with the passage of time, the changes we now propose will be part of the fabric of our country's record of law, human rights and social justice," she continued.

Nigerian Film and Video Censors Board officials have already said the film would not be approved for release due to Nigeria's anti-homosexuality laws. If the film team — producer Pamela Adie and director Uyaiedu Ikpe-Etim — move forward with the movie's release, they could be prosecuted and face up to 14 years in prison, according to Nigerian law.

However, Adie and Ikpe-Etim are determined to get "Ife," which means love in the Yoruba language, in front of Nigerian audiences, they told the BBC.

The film is the story about two women falling in love who talk about what it means to be lesbians in Nigeria during three days together.

The women plan to host a private screening of the movie in Lagos, Nigeria's financial center, at the end of September, leading up to its international premier in Canada in October.

They are also planning a surprise online release. They hope to catch the NFVCB regulators off guard. At the moment, the NFVCB is monitoring all digital platforms in an attempt to prevent the movie being released.

Adie and Ikpe-Etim's goal is to present an accurate portrayal of lesbian and bisexual women on Nollywood's silver screen. They want to do away with the stereotypes of Nigerian women being "possessed, influenced by bad friends or forced into homosexuality" and needing "saving," Adie said.

To view the trailer, visit https://ifeemovie.com