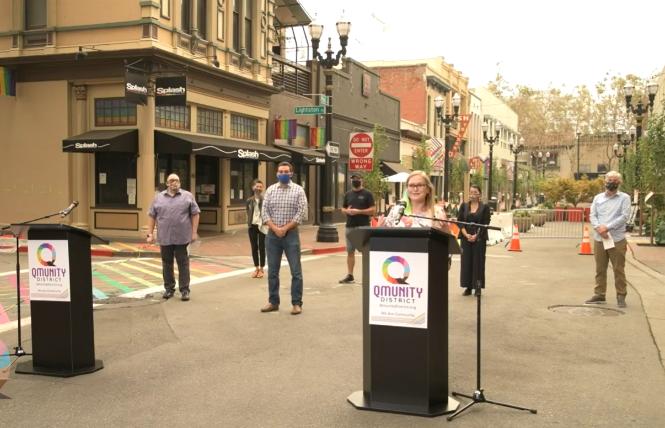 The event took place in-person on the street, which is near Cesar Chavez Plaza and City Hall and is home to Splash Video Bar and Mac's Club, both LGBTQ bars. It was also streamed on Facebook for those who could not attend due to the COVID-19 pandemic and the poor atmospheric conditions in the Bay Area.

"This will be the Qmunity District," Nathan Svoboda of Project MORE, an LGBTQ+ advocacy nonprofit, said at the beginning of the news conference. "It will be welcoming for LGBTQ visitors, allied businesses, and residents of all kinds."

To highlight the queer identity, new lighting has been installed on the street, as well as new maple trees and LGBTQ+ artwork in crosswalks and on sidewalks, Svoboda said. Speaking to the Bay Area Reporter afterward, Svoboda said that Project MORE also created banners that were installed by a company that works with the city, and that the lighting was installed by a Christmas light company.

"Soon, the first LGBTQ mural will be coming to the district," Svobda said, adding that the mural will be created by up to three artists who will be paid a stipend.

Svoboda said that the amount of the stipend is to be determined and people will be able to indicate their interest in participating in the mural beginning this weekend at https://qmunitydistrict.domoreproject.org

"What we're going to do is have our LGBTQ artists in the area submit interest cards to us," Svoboda said. "We will pick three of those artists to collect art designs for the mural. On acceptance, they'd be commissioned."

District 3 City Councilman Raul Peralez said that reimagining Post Street has been in the works for years, calling it a "labor of love."

"It's important in this year of 2020 to find things to celebrate," he said at the news conference. "I was proud to be able to generate the initial funding of $66,000 to produce what Nathan described: the lighting, the murals on the floor, and ultimately the first LGBTQ mural along Post Street, and really inspiring more to come."

Cindy Chavez, president of the Santa Clara County Board of Supervisors and the representative of the district that covers downtown San Jose, said that the Qmunity District will serve as a "living room" for the whole city.

"When I think of San Jose — 170 square miles of vastness, over 1 million people — I think of downtown as the living room," Chavez said. "Having the community here at Post Street allows all of our communities to celebrate diversity and be a part of it. ... Now is a time to look for opportunities for hope and celebration and this allows us to do that."

Maribel Martinez, a queer, two-spirit person who is the director of the Santa Clara County Office of LGBTQ Affairs, said that her office was the first of its kind for a U.S. county. She began her remarks by recognizing the Native Americans and immigrants who have made the South Bay their home.

"But there is a group that has struggled to find a home, to find belonging," Martinez said, referring to the LGBTQ community. "Even in progressive, innovative Silicon Valley, people have felt the need to hide or whisper who they are."

Martinez tied the establishment of the Qmunity District to the challenges America is facing this year.

"If there's anything I've learned from 2020 — an election year, a COVID year — I hope we have learned that silence and invisibility does not serve us," Martinez said. "If we can, we must be so out that there is no place for hate. ... We must join together in the fight against injustice and oppression not just for the LGBT community but for our Black, Indigenous communities of color."

Martinez said she hopes the Qmunity will be a place where people can "sing, dance, and come together" and that she has often felt different or ostracized, but on Post Street she "feel[s] at home."

TJ Bruce, the owner of the Splash Video Bar, said he has been doing business there for nine years. For the previous five, Splash had had other owners.

"It's very exciting to have this happening here," Bruce said. "I always knew this was a very special street."

"I was always hopeful this would bond our community and bring everyone out, whether it's to Pride celebrations or Labor Day," he said. (Silicon Valley Pride, which was virtual this year, usually takes place in the vicinity.) "I can't wait to see more businesses come to the street and can't wait to party again, you know?"

Bruce told the B.A.R. after the event that he was looped into the discussions about the Qmuity District a little less than six months ago.

"People reached out to me and asked me what I thought, and I thought it was terrific," Bruce said. "Go for it!"

Bruce said that the mural will be on the side of Splash.

"There's been a lot of businesses supportive of the gay community and there are a lot of unoccupied retail spaces, and a big building empty for years — three stories — so it'll be interesting if that becomes some kind of anchor business," he said.

At the end of the news event, participants drew the colors of the rainbow progress flag on the side of Splash and viewed a video featuring more community members and Ken Yeager, who is the executive director of the BAYMEC Community Foundation and was the first openly gay elected official in the county.

"I'm so excited about more businesses and action on Post Street. We need a location our community can go to celebrate and enjoy each other," Yeager said. "All other major cities have such a street or neighborhood, and we don't so I'm excited it'll happen soon."

There will be an al fresco dining area on the street to support restaurants forced to move outside due to the pandemic.

The move to establish the Qmunity District comes just three months after the Watergarden, San Jose's only gay bathhouse, closed after 43 years in business, as the B.A.R. previously reported.

Updated, 9/11/20: This article has been updated with additional comments from Mr. Bruce.