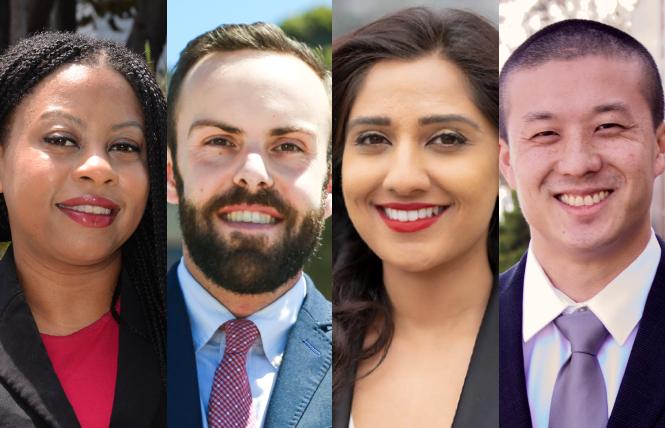 City College of San Francisco perseveres, despite setbacks and leadership changes, and is needed now more than ever. While enrollment has dipped due in part to COVID-19, educational opportunities will be necessary as the economy begins to recover and people decide to pursue new careers. This November, four seats on the college's board of trustees are on the ballot. We recommend the two incumbents, Shanell Williams, the current board president; and Tom Temprano, the vice president; and newcomers Aliya Chisti and Alan Wong. All candidates were asked to complete questionnaires about City College and their policy positions.

Williams, a Black bisexual woman, and Temprano, a gay man, have worked hard to support students and workers at City College, including LGBTQs. They were on the board that passed the college's gender inclusion policy last December, which created new rules to protect trans and gender-nonconforming students and staff, including requirements on the use of chosen names for all college processes. In a recent interview, Williams said she decided to run for another term because she has seen how the college transforms the lives of students. In his questionnaire, Temprano reported that he successfully secured a new permanent home for the college's queer resource center and a full-time position to staff it.

One of the board's priorities will be to hire a new chancellor; the current interim leader, Rajen Vurdien, is expected to serve through June. The last chancellor left under a cloud of accusations of not being transparent. Temprano said the process that was implemented to select Vurdien — involving input from students, faculty, and staff — should be used for finding his successor. In her questionnaire, Williams wrote that the next chancellor should be someone who has "significant years of experience in the community college system, they need to be respected by all of our college constituencies, they need to be a champion willing to rebuild important relationships with all of our partners and City and County of San Francisco departments."

A straight ally, Chisti has over a decade of experience as an educator. When she worked as a legislative aide to former supervisor Malia Cohen, Chisti drafted the "ban the box" legislation that prohibits the use of criminal justice information on applications for private colleges in the city, the first of its kind in the nation. If elected, Chisti would be the first Muslim woman elected to citywide office in San Francisco; currently, she oversees the Free City College program at the Department of Children, Youth, and Their Families. She, Williams, Temprano, and Wong all cited their work in achieving the 10-year memorandum of understanding for the Free City program.

Wong, another straight ally and a legislative aide to District 4 Supervisor Gordon Mar, noted that he is supported by many LGBTQ people and organizations. Wong is looking for transparent leadership in a new chancellor, as well as someone with fiscal oversight. "It's the most important decision that the board of trustees can make," he wrote in his questionnaire.

The candidates were asked if they supported the idea of "defunding the police" and what it means to them, and how that would affect the college district's police department. Temprano responded that the philosophy means "looking at roles we have police to perform that should be handled by other, more appropriate people, and fund those instead." Chisti echoed that sentiment, writing that money from police should be reinvested into health and human services that are actually equipped to address social problems. Wong wrote that "Black Lives Matter is a new civil rights movement that has highlighted the need for systemic change within our criminal justice system that disproportionality impacts Black and Brown communities. ... We need to support and prioritize non-police responses when no criminal statutes have been broken."

Each of these candidates would work to ensure that City College remains accessible to all and provides courses that will help further students' education or career goals. We endorse Williams, Temprano, Chisti, and Wong in the November 3 election.