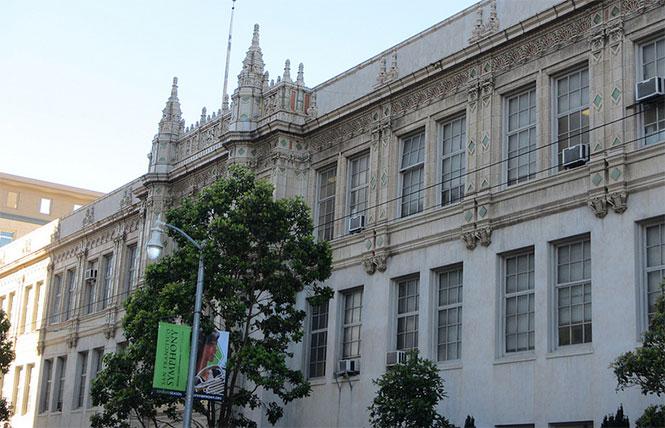 A parcel tax on the November 3 ballot would provide funds for the San Francisco Unified School District.

A slightly lower school parcel tax than the one passed two years ago is among the dozen local ballot measures San Francisco voters will decide in the November 3 election. In addition to other revenue-related measures are ones aiming to allow 16- and 17-year-olds to vote in local elections and non-citizens to serve on city oversight bodies.

The school parcel tax, Measure J, would replace the $320 per parcel tax voters adopted in 2018 with a $288 per parcel tax that would be adjusted for inflation each year. It would net an estimated $48.1 million each year for San Francisco Unified School District to use toward teacher salaries if approved on a two-thirds vote. People age 65 or older would be exempt from the tax, which would sunset on June 30, 2038.

The earlier measure passed with more than 61% of the vote but was challenged in court by a city resident who contended it required a two-thirds vote of 66% in order to be adopted. The city won in court but the case is still pending on appeal.

"I would say it is critical because the reason we had Prop G in the first place was to try to retain our staff. We have the highest cost of living in the country," noted school board member Mark Sanchez, a gay man who is currently president of the oversight body, about the previous parcel tax measure. "Even with Prop G, we lost hundreds of teachers last year."

Another youth-oriented ballot item is Measure G, which would lower the age limit to vote in local races from 18 to 16. It needs a simple majority to pass and would impact Measure C, which would allow non-citizens of voting age to serve on city advisory bodies and commissions, such as the youth, planning, and health commissions. It too needs a simple majority to pass.

With the city's budget decimated by the novel coronavirus outbreak, there are a number of revenue-related measures on the fall ballot that city leaders hope will pass and help them deal with a projected $1.5 billion budget deficit in the fiscal year that begins October 1. Measure F, for instance, would do away with the payroll expense tax businesses pay and replace it with a gross receipts tax.

Along with a number of other local tax changes, the measure is projected to bring in $97 million a year. It needs a simple majority vote to pass.

Measure I, the real estate transfer tax, would raise the rates paid when property priced at $10 million or more is sold. It is estimated to net $196 million annually and needs a simple majority vote to pass. District 5 Supervisor Dean Preston authored it and is its lead proponent.

Measure L would impose a tax on those businesses whose highest-paid managerial employee earns more than 100 times the median compensation paid to their employees in San Francisco. If adopted by a simple majority vote, it is estimated to bring in between $60 to $140 million annually.

Measure A would result in the city issuing $487,500,000 in bonds to pay for housing the homeless and offering unhoused individuals mental health services, upgrade public parks and recreation facilities, and pay for road repairs. It needs a two-thirds vote to pass.

Like the remaining city measures, it needs a simple majority to pass. Measure D would create a new oversight board and Office of Inspector General for the sheriff's department. Measure E would do away with the requirement in the city's charter that the San Francisco Police Department maintain a minimum of 1,971 full-duty sworn police officers.

Measure H would reduce the restrictions on what businesses can operate in ground floor commercial spaces in neighborhood business districts, so that nonprofits, social service agencies, and store pop-ups would be allowable uses. A similar zoning change was recently instituted for upper Market Street in the LGBTQ Castro District in order to address a glut of vacant spaces along the commercial corridor.

Mayor London Breed is the lead sponsor of the measure. It would also do away with neighborhood notification rules for allowed businesses and speed up the permitting process.

Measure K would authorize the city by ordinance to own, develop, construct, rehabilitate, or acquire up to 10,000 residential units of low rent housing projects within the city for the purpose of providing affordable rental housing.

Voters will also find the regional Measure RR on their ballot, which authorizes a 30-year one-eighth cent sales tax to provide roughly $100 million a year for Caltrain rail service from San Jose through the Peninsula and into San Francisco. Due to the demands of civic leaders in San Francisco and Santa Clara counties, it also restructures the governance of the rail service. It needs a two-thirds vote to pass.

Web Extra: For more queer political news, be sure to check http://www.ebar.com Monday mornings for Political Notes, the notebook's online companion. This week's column reported on San Francisco and Los Angeles lagging behind other major West Coast cities on the census count.