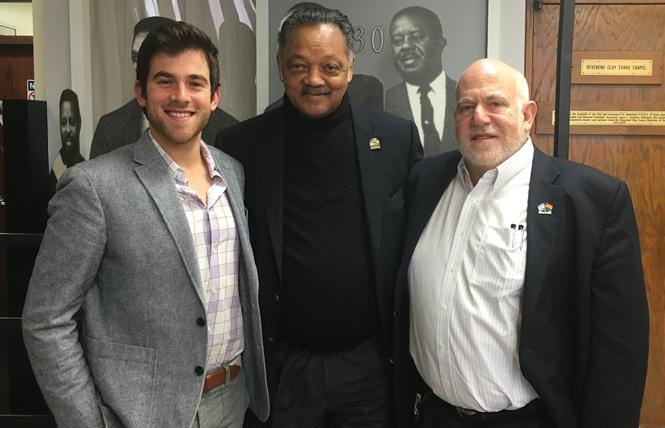 For the first time ever the Jewish Community Federation and Endowment Fund of San Francisco, the Peninsula, and Marin and Sonoma Counties, appointed a gay man, Arthur Slepian, as chair of its board.

At the same time, Tyler "Tye" Gregory, also a gay man, was tapped as executive director of the Jewish Community Relations Council.

JCRC's work centers on strengthening Jewish communities in the United States and Israel as well as collaborations with other communities, according to the organization's website.

Both organizations are based in San Francisco.

The two men come from A Wider Bridge, an organization centered on connecting LGBT Jewish American and LGBT Israeli communities.

Slepian assumed his new position July 1. The federation announced his appointment to his two-year term January 28. He has served on the federation's board since 2011.

Gregory, 32, started his position as JCRC's fifth and youngest executive director in the organization's 75-year history April 1, he told the Bay Area Reporter.

Gregory was in the Bay Area for a JCRC gala and to meet community members and staff when the novel coronavirus pandemic broke out and stay-at-home orders were mandated both in the Bay Area and New York. The order forced him to step into his new role two months ahead of schedule. He was initially set to take over as head of JCRC June 1.

This week, AWB announced that Ethan Felson, 54, started at its new executive director. Felson, a gay man, will be based in New York, said board Chair Alan Schwartz, who had led the organization in the interim.

Gregory said he loved AWB and believes it's going to continue to grow and thrive even through the pandemic, but the California native missed the West Coast and working on policy, which brought him back to the Bay Area.

"What I love about JCRC is that it's not only building bridges with their communities, it's working with them hand-in-hand to work on policy change," he said.

Plus, it was one of the first organizations of its kind in the country to support LGBT rights, he added.

JCRC is in a good place, coming out of one of its best fundraising years for the $4.5 million organization and the hiring committee wanted to maintain the momentum, said the organization's board chair, Paul Resnick.

"We felt that we were looking at the future and positioning the organization to address what the community, the Jewish community, and the broader community would be in the future," said Resnick, an ally who co-chaired the search committee.

"I'm extremely pleased about all of the things that attracted us to him," Resnick said about Gregory's understanding of today's culture as well as his experience building up AWB. "He has more than evidenced his ability to deliver."

Gregory grew AWB into a well-respected internationally known $1.7 million organization and strengthened its fundraising and financial framework during his tenure, Schwartz, a gay man, said. He also created new and innovate programs that reflected the Israel and North American LGBTQ experience.

Gregory and Slepian, "together are extraordinary leaders for [an] extraordinary time," he added, noting the turbulent times in American history and the two men's ability to steer the organizations into the future.

"We are really excited about his arrival in this role," Federation CEO Danny Grossman, an ally, said of Slepian. "He's not only able to build bridges with other communities, but he's able to widen the bridge for our own communities within this organization. That's powerful work."

The federation, which has operated for more than 150 years, serves San Francisco, the East Bay, North Bay, and the Peninsula. The organization operates on an annual budget of $35 million and manages $2 billion in philanthropic funds, Grossman and Slepian said, including the $136 million in assets transferred from the former Jewish Community Foundation of the East Bay, according to a news release. The federation grants an estimated $200 million annually to support community organizations.

Slepian believes he and Gregory's LGBT experience bring a unique perspective and an ability to build bridges throughout the Bay Area's diverse Jewish community.

Slepian came to San Francisco from the East Coast more than 40 years ago spoke about living through history at a time when it wasn't as easy being an openly gay Jewish man.

However, he created a life in the city with his husband, Gerry Llamado, who converted to Judaism in 2007, and their dog, Dexter. Together for 25 years, Llamado is active in the Jewish community.

"[There has been] a lot of progress during that time, but I can remember a time when life was really different. I think that perspective of remembering what it feels like to be an outsider, to feel marginalized, I think is really important today," said Slepian.

He is all too aware that there are many Jews of color, transgender Jews, and Jews in interfaith relationships who don't feel "fully welcomed or accepted inside the tent," he said.

He made it clear diversifying the federation and bringing people into the tent was one of his top priorities.

For Millennial queer Jews, Gregory's appointment is "really only the first step," he said, noting the bar has been raised beyond simply raising the rainbow flag or having a special mixer for young professional Jews.

"They are going to expect a lot from us," he said, noting that a majority of people under the age of 30 voted for Bernie Sanders in the Democratic primaries.

"We need to understand what that means for the Jewish community's future," Gregory continued, stating it's not only about current political issues. "It's also about change inside of our Jewish community. We have a lot of systematic change to do inside in addition to advancing the issues that younger people care about."

Leading in turbulent times
Gregory and Slepian are committed to making that change happen within the Jewish community.

The two men are embracing their roles at their respective organizations to meet the needs of the times for the Bay Area's Jewish community.

They both have quickly responded to the rapid changes brought about by the pandemic and the renewed protests against racism and police brutality.

The men want to open the door to people who haven't felt as welcomed by their respective organizations in the past and renew the community's history of battling anti-Semitism, along with racial and social justice causes.

Grossman, Slepian, and Gregory are well aware of the federation and JCRC's own diversity issues. Grossman acknowledged that only one of the federation's 91 employees identifies as a person of color. The federation's board and committee members are majority Ashkenazi, white Jews, mostly descended from Central and Eastern Europe.

Grossman said they've been "looking to build those bridges."

Grossman noted that since the civil rights movement the Jewish community and other minority groups have evolved and "drifted somewhat apart." He said perspectives of Israel are also a "complicating factor."

"One of the things that I really love about Arthur's arrival at this time is he understands how to build that 'wider bridge,'" said Grossman.

Rising to the moment
Slepian and Gregory expressed their plans for beginning to solve the issue.

"We want to proceed in a very thoughtful, careful way," said Slepian. "Not in a symbolic way.

"The onus is on us" to do some "soul searching" on why the federation and broader Jewish community is so white and to listen to Jewish communities of color, he continued, stating that it wasn't simply filling a board seat, but "a matter of how we address our own internal culture."

Said Gregory, "You have to put young people at the core of your work and make sure that they are represented. They should be present at every level of leadership.

"I think that engagement is just an important of a tool as education and we can't do one effectively without the other," he added.

The two organizations are "in the process of committing ourselves to a very strong agenda around issues of racial justice and equity," Slepian said in response to the pandemic and recent racial unrest in the U.S.

Gregory, Grossman, and Slepian referenced the pandemic, COVID-19-related anti-Asian attacks, and the Black Lives Matter movement following the May 25 killing of George Floyd in police custody that sparked national and global protests.

"This is our moment in time, this challenge that we are facing is really unprecedented. We still don't know the scope and the scale of the depth of it," said Slepian, who is focused on raising more money to fund grants and research and to bring thought leaders together in preparation to rebuild the Jewish community and other communities.

In April, the federation set up $15 million for COVID-19 relief funds that were awarded to Bay Area Jewish organizations. In June, the federation added $50,000 specifically to aid Jews of color suffering during the pandemic and another $25,000 for a Jews of color leadership development, he said.

"We have a rebuilding project ahead of us," Slepian said. "We want to build something better."

Gregory added that he's working with "civic partners to formulate a legislative agenda for the Jewish community to advocate for police accountability, racial justice, [and] criminal justice reform" through the organization's Advancing Democracy Initiative.

Both organizations have urged Jewish donors to support racial justice organizations, such as Be'chol Lashon, a Black Jewish organization, as well as the NAACP among others. The two organizations have brought legislative leaders from the Asian, Black, Latinx, and Jewish caucuses together to discuss the rise in hate crimes and recently spearheaded the #KneelAtHome campaign.

Gregory added that JCRC has "a great track record at advancing social justice" and influencing other organizations across the U.S. but needed to do more regarding combatting anti-Semitic attacks.

"We have not done a good job explaining the uniqueness of anti-Semitism," said Gregory. "We need to have a much more sophisticated discourse about these issues and demonstrate anti-Semitism is a systemic form of bigotry and not an ideological one.

"We need to educate people where criticism of Israel is okay and where it crosses the line into anti-Semitism," he continued. "It's very important to me that our neighbors understand Jewish identity and both what our needs are and also how discrimination affects us."

To learn more about the JCF and JCRC, visit https://jewishfed.org and https://jcrc.org

Updated, 7/19/20:This article has been updated regarding Arthur Slepian's partner converting to Judaism in 2007.