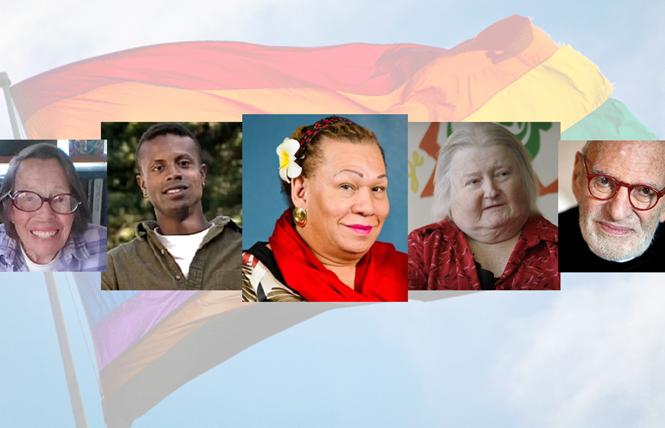 The honor wall was inaugurated last year, the 50th anniversary of the Stonewall riots, and 50 names of deceased pioneers, trailblazers, and heroes were included. They were selected by the Stonewall 50 Wall of Honor Board of Governors, which is made up of 18 LGBTQ leaders.

The court system and the task force are now tasked with naming five people annually.

This year's inductees are Phyllis Lyon, founder of the first lesbian organization Daughters of Bilitis in 1955 and a trailblazer from San Francisco; Sean Sasser, AIDS activist and educator known for his appearances on MTV's "The Real World: San Francisco" that depicted his relationship with Pedro Zamora, who was named to the wall of honor in 2019; Lorena Borjas, a trans and immigrant rights activist known as the mother of the trans Latinx community in Queens, New York; Aimee Stephens, a Michigan resident whose historic U.S. Supreme Court case paved the way to LGBTQ non-discrimination protections in employment; and Larry Kramer, playwright, author, and LGBTQ and AIDS activist who founded Gay Men's Health Crisis in New York City.

Lyon died in April of natural causes. Sasser passed away in 2013. Borjas died in March of complications of COVID-19. Stephens died in May of kidney disease just weeks before the high court issued its landmark ruling in her case and two others. Kramer died of pneumonia in May.

"Now more than ever it is important for us to remember whose shoulders we stand on," honor wall founder Nicole Murray Ramirez, queen mother I of the Americas, stated in a news release.

Rea Carey, executive director of the task force, stated that the five inductees "have helped to change the world and improve the lives of LGBTQ people and those with HIV."

People can view the honor wall's Wikipedia page for a list of all the inductees.

SF, NY team up for AIDS Walk at home
The AIDS Walk events in San Francisco and New York will collaborate for the first time for this year's virtual "at home" event Sunday, July 19.

AIDS Walk: Live at Home is a 90-minute streaming event that will be held at 10 a.m. (Eastern and Pacific times) to raise funds for PRC in San Francisco and Gay Men's Health Crisis in New York City.

In the Bay Area, the AIDS Walk program will be broadcast on ABC7/KGO TV in partnership with iHeartMedia and feature its on-air personality Elvis Duran.

"From the Bronx to the Bay Area, this creative joint effort will unite our distinct yet like-minded communities of supporters from across multiple regions," PRC CEO Brett Andrews stated. "At the same time, supporters from other locations across the country — particularly with cities that do not have their own AIDS walks — will be able to join in on the fun."

Those looking to participate can register at http://www.aidswalk.net

AIDS Walk New York and AIDS Walk San Francisco were founded, in 1986 and 1987 respectively, by Craig R. Miller and his organization of activists, MZA Events.

The upcoming term runs from July 1 to June 30, 2021. (There has been a delay in the announcement due to the novel coronavirus pandemic.) The civil grand jury usually meets once a week, with additional meetings and interviews scheduled as necessary.

The deadline to apply is Friday, July 24. A court spokesman said that the grand jury meetings would be conducted virtually until the shelter-in-place order is lifted.

For more information and to apply, go to https://civilgrandjury.sfgov.org/join.html