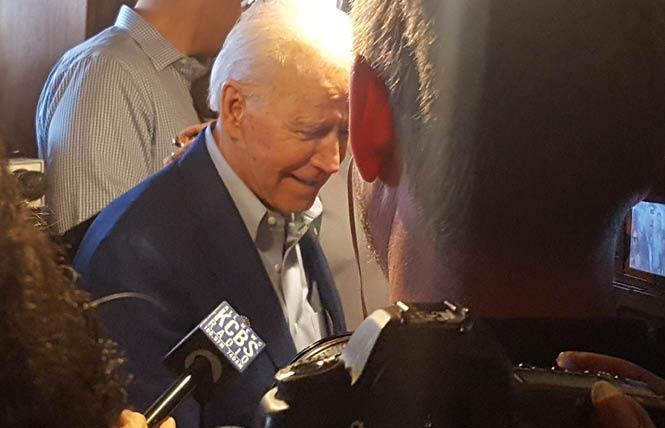 Former vice president Joseph R. Biden Jr. was surrounded by the media during a stop at the Buttercup restaurant in Oakland Tuesday morning. Photo: Cynthia Laird

Former vice president Joseph R. Biden Jr. spent part of Super Tuesday morning at a diner near Oakland's Jack London Square, hoping to hustle up some votes as Californians head to the polls.

Biden arrived at about 10:45 a.m. at the Buttercup restaurant at Third Street and Broadway and was warmly greeted by customers. Owner Ben Shahvar told the Bay Area Reporter that the Biden campaign contacted him to see if they could hold a meet and greet there.

"I said sure," Shahvar said.

Oakland Mayor Libby Schaaf, District 3 City Councilwoman Lynette Gibson McElhaney, and state Senator Steve Glazer were on hand. McElhaney told the B.A.R. that she did not endorse Biden. Schaaf previously said she was not endorsing a