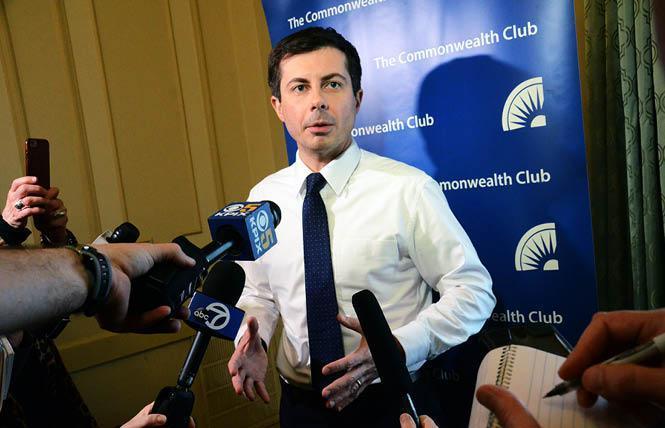 There were hints Sunday morning that Pete Buttigieg would soon end his campaign for the 2020 Democratic presidential nomination. In an interview with NBC's "Meet the Press," host Chuck Todd asked the candidate where his campaign is now, after his single-digit returns in Saturday's South Carolina primary.

An unusually low-key Buttigieg responded that he wakes up every day and looks at "how we can do our part to make sure we can defeat Donald Trump." And he was speaking from Georgia, where he had gone to visit with former president Jimmy Carter. Georgia is not one of the critical 14 states that will vote on Super Tuesday, March 3.

Sunday afternoon (Pacific time), Buttigieg's campaign announced that the candidate would speak to supporters from his South Bend headquarters at 8 p.m. that night.

Chasten Buttigieg introduced his husband to the audience, clearly struggling to hold back tears. They shared a brief kiss and hug.

In making his announcement, Buttigieg said he had felt "called to action" to unseat a divisive president but that, "Today is a moment of truth" and "the path has narrowed to a close for our candidacy. ..."

He said he feels a responsibility to "help unify America to defeat Donald Trump."

"At this point in the race, the best way to keep the faith is to step aside and help bring our party and our country together," said Buttigieg, vowing to "do everything in my power to assure we have a new Democratic president come January."

In his speech, Buttigieg also acknowledged that his campaign could measure its success in some respects by knowing that it provided "every kid out there wondering if whatever marks them as different" an opportunity to see "someone become a leading American presidential candidate with his husband at his side."

Political commentators Sunday night said Buttigieg's campaign realized he couldn't win the nomination and, by staying in the race, would hurt the chances for a stronger moderate candidate to secure it.

After more than a year of campaigning and starting with more than 20 viable competitors, Buttigieg attracted steadily growing support and with success unprecedented for an openly gay candidate for president. He became the first openly gay presidential candidate to win a major party primary, when he was ultimately declared the victor of the Iowa caucuses in early February. He followed that with an impressive second-place showing a week later in New Hampshire.

But as his success grew, so did the attacks — on his relative youth — he is 38 — his limited experience as a two-term mayor of a small city, his inability to attract African American voters, and his being gay. Just days after the New Hampshire primary, right-wing radio talk host Rush Limbaugh beckoned listeners to imagine how it would look if the Democrats nominated a "gay guy kissing his husband on stage next to Mr. Man Donald Trump?"

While Buttigieg never topped a national poll, he climbed from less than 1% support nationally in February 2019 to 13% (and a tie for fourth) in February 2020.

Buttigieg was one of five moderate candidates seeking the Democratic nomination. The other four are former Vice President Joseph R. Biden Jr., former New York City mayor Michael Bloomberg, Senator Amy Klobuchar of Minnesota, and businessman Tom Steyer. Steyer pulled out of the race Saturday night, after placing third in the South Carolina primary but failing to achieve at least 15% of the vote and earn delegates to the Democratic National Convention.

On the progressive, or left-leaning, side are Senators Bernie Sanders (I-Vermont) and Elizabeth Warren of Massachusetts. Sanders has the lead in delegates earned thus far, and various polls suggest strongly that he could win so many delegates in the 14-state Super Tuesday voting that he could essentially lock down the convention nomination March 3.

As of Sunday, Sanders had accumulated 60 delegates, Biden 53, Buttigieg 26, Warren eight, and Klobuchar seven. More than 1,300 delegates are up for grabs Tuesday. Another way of counting that is: progressives 68, moderates 86.

Many political observers speculated that it was that reality that prompted Buttigieg to suspend his campaign Sunday night and throw his support to Biden. Buttigieg has made it very clear that he believes Sanders is a much too polarizing figure to unite the party against Trump. And he sees Sanders as a step toward continuing to polarize the nation.

The latest polls showed Biden with 14% support, just 1% off from enough support to secure a portion of California's 415 delegates. And in California, Buttigieg was polling at only 7%.

In the other three big states voting Super Tuesday — Texas, North Carolina, and Virginia —Biden has enough support to win delegates, but Buttigieg was tracking only 6 to 8%.

Fivethirtyeight.com said that, by leaving the race now, Buttigieg "builds goodwill with Democratic Party officials broadly and Biden in particular."

"If Biden is elected president, it's easy to imagine him putting Buttigieg in a top administration post that helps Buttigieg fill out his resume..." wrote Perry Bacon Jr. of fivethirtyeight. "And goodwill among party officials will help Buttigieg if, as I expect, he eventually runs for president again."

David Axelrod, who led President Obama's successful campaign from relative obscurity to the White House, told the New York Times Sunday, "The Pete Buttigieg story isn't over. It's just beginning. He's 38 years old. He's vaulted himself into the national conversation. He obviously has work to do on some things that — some weaknesses we've seen in this election — but whenever there is a conversation again about Democratic candidates, he'll be in that conversation. And that's a remarkable achievement, given where he started a year ago."

"Mayor Buttigieg ran an incredible campaign that broke glass ceilings and inspired countless LGBTQ people to run for office and enter public service," HRC President Alphonso David said Sunday night. "His history-making, open and honest campaign gave representation to a community that has been, for long far too long, pushed out of the spotlight. He gave a voice to millions across the country, to issues often ignored. He championed his support for LGBTQ equality and effectively articulated how issues of discrimination and inequality personally affected him and his family, undoubtedly moving our country towards a more equal society."

"Tonight, we are disappointed to see Pete's historic candidacy come to a close. But our hearts are full and our spirits are strong. And we are forever grateful to Pete and Chasten for their contributions to our community and to this nation," Rick Zbur of EQCA and André C. Wade of Nevada stated.

Zbur and Wade added: "This is the most important election in our lifetimes. The stakes couldn't be higher for LGBTQ+ people, for the diverse communities to which we belong and for our democracy. We remain committed to defeating Donald Trump and putting a pro-equality president back in the White House. When a Democratic nominee is chosen, we will do everything in our power to make sure they are elected."