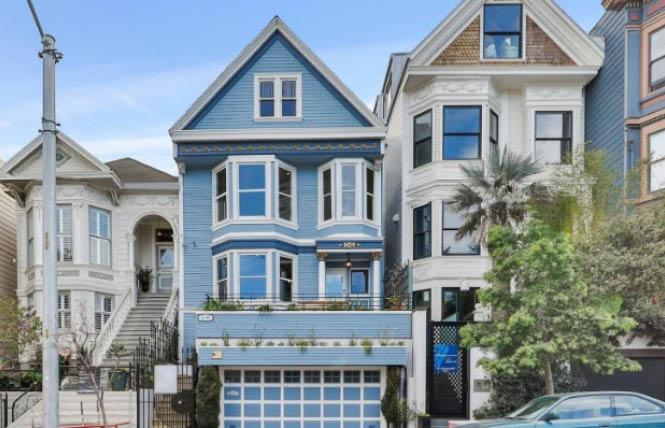 A home on 18th Street that is famous in France was recently put on the market. Photo: Courtesy Compass

A Victorian home in San Francisco's Castro district that is famous in France has gone on the market.

The property at 3841 18th Street, a short walk from Mission Dolores Park, is listed for sale at a price of $3,450,000. The 3,030 square foot home built in 1886 comes with five bedrooms and three and a half bathrooms, according to the listing by real estate company Compass.

It often draws tourists from France, who know the property as La Maison Bleue — or the Blue House — because it is where the French folk-rock star Maxime le Forestier once stayed at and found inspiration for his 1972 song "San Francisco."

A writer for the San Francisco Chronicle, Alexis Venifleis, was able to track down the location of the house a decade ago. She received help in doing so from a writer who had penned a piece for the French weekly magazine Nouvel Observateur that detailed the singer's time in California during the summer of 1971.

The article mentioned that it was where le Forestier had met famed gay beat poet Allen Ginsberg. Back then it had housed the hippie commune Hunga Dunga, which had many LGBT members.

One of its members, bisexual author Phil Polizatto, wrote about the commune in his 2008 novel "Hunga Dunga: Confessions of an Unapologetic Hippie." He once a told an interviewer that the commune played "a very important" role in the city's inter-communal network.

"It was comprised of such a variety of personalities, it is amazing it functioned as well as it did. Sixteen people, from members of the Cockettes to country-hippie macho men; earth-mother goddesses to slinky sexy women, and a baby all lived together," Polizatto had noted.

While the house is described as blue in le Forestier's song, it sported a light green with white trim painted facade at the time that Venifleis, a Parisian who grew up singing the song, located it.

"I had heard that many French tourists had searched for this blue house, but no one had found it," she wrote in her article published Saturday, September 25, 2010. "Some thought it was in the Haight. Others thought that maybe it was in Berkeley."

In June 2011, following the publication of Venifleis' article, the house was repainted blue and a historical marker was put up on its facade paid for by the Consulate General of France in San Francisco that notes it is the house that inspired le Forestier. The singer himself came for the dedication ceremony of the plaque that month.

The home being for sale is "a Francophile dream come true," wrote Gerard Koskovich, a local LGBT historian and Francophile himself, in a February 25 Facebook post.

Koskovich added that le Forestier's song "is certainly the best-known song in French about San Francisco" and whenever he strolls by the house "on my way to the Castro, I invariably hum the song."

The online listing for the property, which was extensively renovated in 2009, makes no mention of its fame in France. It merely states that the "renowned Dolores Heights home" is "a stunning retreat in the heart of the City!"

According to public property records, the house's current owner is prominent lesbian attorney Angela Lucia Padilla. After discovering someone had broken into the home last summer, Padilla had told the Bay Area Reporter that she planned to sell it and move her family out of the "cesspoll" San Francisco has become.

Despite the house's notoriety in France and LGBT historical ties, the property is not currently designated as a city landmark, something its new owners could choose to pursue.