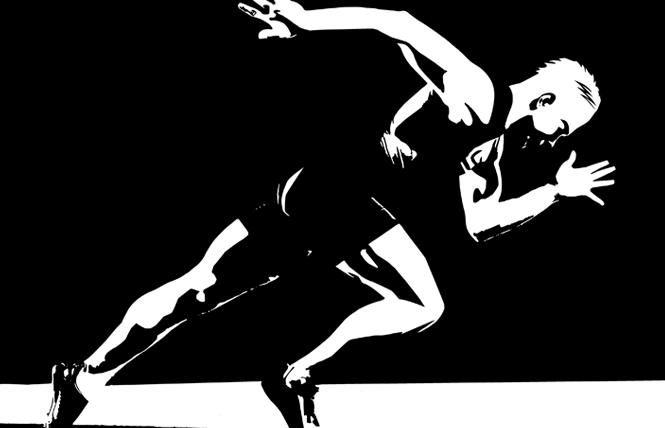 I recently discussed some of the many bills making their way through statehouses this year, attempting to curtail, or even criminalize, transgender care. There is one category of these bills, however, that I feel deserves special attention. A number of these proposals are specifically trained on young trans athletes.

Perhaps the best known of these bills right now is House Bill 2706, making its way through the Arizona Legislature. Called the "Save Women's Sports Act," the bill requires all sports sponsored by an education institution, such as schools, colleges, etc., be based on "biological sex," according to the bill. It applies to public and private institutions.

The bill doesn't stop there, of course. While it does go on to specify that women's sports "may not be open to students of the male sex," it makes no opposing example of men's sports. Further, the bill claims that any such dispute of an athlete's gender will need to be resolved with a signed physician's letter that determines an individual's sex based on internal and external anatomy, testosterone levels, and the person's genetic makeup.

Setting aside the flaws with such determinations, and understanding the wide variances in genetics, physical anatomy, and testosterone levels, this means that a school could require all women — or at least any who are challenged, regardless if they are trans identified or not — to be subjected to a medical examination that would disclose details of their private parts.

Much the same is happening in Idaho, with HB 500; in Missouri with House Joint Resolution 82; and in Alabama, with HB 35 and HB 20, aka the Gender Is Real Legislative (GIRL) Act. I would not be surprised to see more of these bills hit statehouses between the time I write this and this column's publication date.

The issue is being treated as if it is a major one, requiring immediate legislative solutions, a new bulwark in the "culture wars," if you will.

Yet the issue only serves as easy election year "red meat" for conservatives looking for something to scare their base with.

The notion of people somehow masquerading as the opposite gender to participate in women's sports is nothing new. While I am sure there are plenty of examples dating back into antiquity, the first modern example I was able to locate was at the 1936 Olympics, held in Nazi Germany.

In those games, American Helen Stephens, known as the "Fulton Flash" due to her Missouri roots, defeated record holder and 1932 winner, Stanislawa Walasiewicz.

One might wonder how this lifelong resident of Missouri would feel to know that her home state is championing the very type of testing she was subjected to in Berlin.

Forty years later, the issue of transgender people in sports was once again headline news, as Renee Richards fought to play tennis in the U.S. Open in 1976. Richards refused a chromosome test, and was not allowed to compete in the U.S. Open, the Italian Open, or Wimbledon.

The arguments against Richards are the same that we hear today, with some fearing that allowing Richards to play would open the door for any number of male players to change their own genders in order to compete in women's tennis, while the United States Open Committee argued in court that trans women should not be allowed to compete at all, because "there is competitive advantage for a male who has undergone a sex change surgery as a result of physical training and development as a male."

Richards eventually did relent and took the required chromosome test. The result was ambiguous.

Ultimately, Richards did win her case, and was able to play in the 1977 U.S. Open. She lost in the first round of singles competition, but was able to make it to the finals playing doubles. The latter could be considered Richards' high water mark when it came to her tennis career.

This leads us back to today. Another 40 years on, and we are still arguing about gender in athletics. Today, the biggest name mired in controversy is Caster Semenya, a lesbian middle-distance runner and gold medalist at the 2016 Olympics in Rio de Janeiro.

It is debates over Semenya, who, like Richards, has been required to prove her gender in order to compete — and has been barred for refusing such tests — that have helped fuel a lot of the controversy over trans student athletes. Semenya, however, is not transgender. She has naturally occurring high levels of testosterone.

Not that details matter much to those seeking to smear anyone who doesn't fit their narrow definitions of sex and gender.

A lot of the discussion, though, is more of the same sort of anti-transgender animus wrapped up in faux sympathy over women's causes that has gone on for ages. This isn't about protecting women in sports so much as it is about creating an exclusion.

What's more, just as we saw with trying to bar trans women from restrooms, it will be all women, trans or not, who will bear the burden. This will be used to shame any woman who is viewed as not feminine enough and will discourage women from competing in an environment built on suspicion.

Meanwhile, in 80 years of fears over men participating in women's sports, not one case has come forth to actually show an unfair advantage. That alone should show just how foolish this debate even is.

It's time to let trans people compete, and leave such naked bigotry behind.

Gwen Smith can be found at www.gwensmith.com