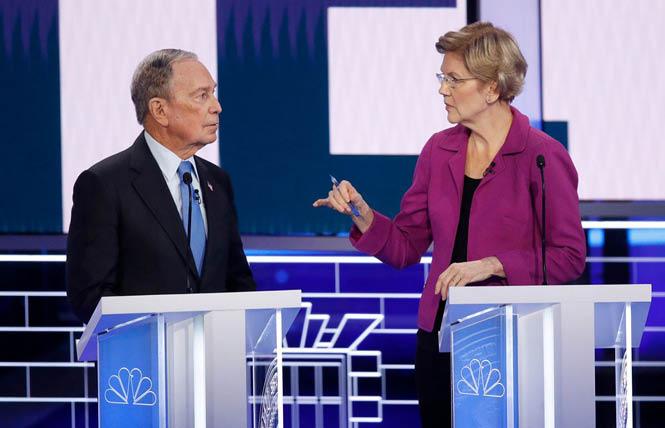 "Horse-faced lesbians." That was one of the first barbs tossed at the Democratic presidential field's newcomer, billionaire former New York City mayor Michael Bloomberg, Wednesday night, in the party's most combative debate yet.

"I'd like to talk about who we're running against: a billionaire who calls women 'fat broads' and 'horse-faced lesbians.' And no I'm not talking about [President] Donald Trump," said Warren at the Las Vegas debate held by NBC, MSNBC, and the Nevada Independent. "I'm talking about Mayor Bloomberg."

Warren was apparently quoting from an "unauthorized" collection of Bloomberg quotes, called "The Wit and Wisdom of Michael Bloomberg," and pulled together years ago by one of his female corporate officers and reported in the Washington Post February 15. One of the statements listed in the booklet quotes Bloomberg as calling the British royal family "a bunch of misfits — a gay, an architect, that horsey-faced lesbian, and a kid who gave up Koo Stark for some fat broad."

Bloomberg was referring to Kathleen Norris Stark, better known as Koo, who's known for her relationship with Prince Andrew, according to Wikipedia.

In one quote from the booklet, Bloomberg characterized a competitor as a "Cokehead, womanizing, fag." Another says that, when asked to identify a sport that does not use balls, Bloomberg replied, "lesbian sex."

(Bloomberg met the polling qualifications to participate in the February 19 debate. He is not raising money, instead spending hundreds of millions of dollars of his personal wealth on TV ads in states that vote on Super Tuesday, March 3. He is not on the ballot in Nevada.)

Sanders self-identifies as a Democratic socialist.

"Let's put forward somebody who actually lives and works in a middle-class neighborhood in a Midwest industrial city," said Buttigieg, the former mayor of South Bend, Indiana, referring to himself. "Let's put forward somebody who's actually a Democrat. We shouldn't have to choose between one candidate who wants to burn this party down and another candidate who wants to buy this party out."

Political commentators seemed to agree that Warren and Buttigieg did the best during the debate; most seemed to think Bloomberg suffered significant hits.

MSNBC talk show host Chris Matthews asked Warren after the debate why she used such a graphic quote, "horse-faced lesbians," in going after Bloomberg.

"I think it's important for people to know exactly what Michael Bloomberg has said and done," said Warren.

"That moment, with you and him," said Matthews, "whoever's right or wrong, you or him ... that is going to be replayed in every affiliate around the country ... for days if not weeks."

"I hope that is the case," said Warren.

"Is that a disqualifying fact?" asked Matthews.

Misogyny was a theme in Nevada.

Several candidates criticized Sanders — on stage and before the debate — for not doing enough to stop the threatening and anti-women attacks on social media on Nevada union workers who have criticized Sanders' health plan. People claiming to be "Bernie Bros" on social media have posted hundreds of messages, warning of violent attacks on Sanders' critics, including former gay former Congressman Barney Frank.

During the debate, Buttigieg said Sanders has some responsibility for what people do to support his campaign, "how you motivate people to treat other people."

"What is it about your campaign that seems to be motivating this kind of behavior?" asked Buttigieg.

Sanders suggested the so-called Bernie Bros might be part of some effort to interfere in the election.

During one of the most heated portions of the night, Warren lit into Bloomberg over how many non-disclosure agreements he has signed with former employees at his company. She challenged him to release women who signed them from the confidentiality.

"None of them accuse me of doing anything other than maybe they didn't like a joke I told," Bloomberg said. "And let me just — there's agreements between two parties that wanted to keep it quiet. And that's up to them. They signed those agreements and we'll live with it."

Changing landscape
The landscape of the Democratic presidential competition has changed quickly since the Iowa caucuses and New Hampshire primary, but Sanders has been on the top of all recent polls. The latest poll in Nevada showed him with 35%, a 19-point lead over the closest competitor, Warren, with 16%. Buttigieg was polling third with 15%. The Nevada caucuses takes place Saturday, February 22.

After New Hampshire, Buttigieg leads in the number of delegates won to the Democratic National Convention and was in second place in terms of the number of votes racked up. But the improved popularity of moderate Senator Amy Klobuchar (Minnesota) and the sudden rise of moderate Bloomberg have clearly cut into Buttigieg's base. And the division of moderate voters among Buttigieg, Klobuchar, Bloomberg, and former vice president Joseph R. Biden Jr., coupled with a slump for Warren, seemed to help give Sanders at least the appearance of leading the field.