Jock Talk: Wrist slap for Astros a blight on baseball 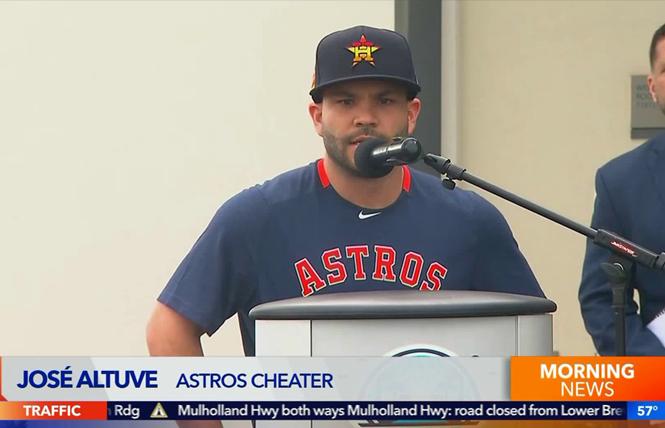 As Major League Baseball desperately tries to remember in what pawn shop it hawked its moral compass, let's talk about the Houston Astros and Pete Rose. Such conversation can draw out enough passion to make the presidential race look boring.

For those of you who have done nothing the past few weeks since the Super Bowl except watch cute kitten videos on YouTube, know that an MLB investigation found that the Astros cheated during the 2017 and 2018 seasons by electronically stealing opponents' pitch signals. The scheme apparently involved zooming in on signals with iPhones, relaying information electronically, alerting batters by bashing trash cans or by using buzzers strapped to their bodies, and part of the largesse the Astros reaped was a World Series championship.

Front office folks and coaches were suspended and fired, the players for the most part went unpunished and were granted immunity during the investigation in exchange for their confessions, but have been condemned by fellow players for their enthusiastic participation. MLB, in its infinitesimal wisdom, decided not to strip the Astros of their American League title or their 2017 World Series championship.

This might have been an entirely different conversation if the Astros had misinterpreted any of the signals and a hitter, anticipating a low outside curveball, instead leaned into a high and inside fastball, winding up dead or severely injured. As it is, the Astros set out to intentionally cheat, unfairly alter the outcomes of games and postseason playoffs to the financial detriment of opponents (The Athletic reported nine pitchers were demoted after getting banged up at Minute Maid Park in the 2017 season) — but get to keep their titles and their right to play.

In contrast, Rose never was accused of cheating at the game, earned his titles through will, ability and hard work, epitomized for a generation baseball values — and he remains banned for life because he gambled on baseball games and lied about it.

This sign-stealing scandal differs from previous sign-stealing scandals in its scope, sophistication, and audacity. Past casual sign stealers have been subject to fines and suspensions. This crew? The delivery of a shallow and insincere non-apology at a quickie news conference. Infielder Alex Bregman said he was "really sorry about the choices that were made," but not that he cheated and was sorry he did. Fellow infielder José Altuve, who was the league MVP in 2017, said "the whole Astros organization and the team feels bad about what happened in 2017," but did not admit he cheated and was sorry for what he did. For all we know, when he talks about "what happened" in 2017, he could be talking about the Rohingya refugee crisis, the New England Patriots comeback in the Super Bowl against the Atlanta Falcons, or the mass shooting in Las Vegas that killed 58 and wounded hundreds.

Vegas bookmakers are laying odds that Astros batters will be hit by an unusual abundance of targeted pitches this season, leading newly anointed Astros manager Dusty Baker to remark, "I'm depending on the league to try to put a stop to this seemingly premeditated retaliation that I'm hearing about. In most instances in life, you get kind of reprimanded when you have premeditated anything."

Premeditated as in say, an elaborately devised system to steal other teams' signals? With MLB having forfeited on any reprimand of the players, not even taking away their World Series trophy (which the commissioner dismissed as merely a "piece of metal"), wouldn't it seem that attempting to hit players with pitches is the only form of retribution that is likely to occur?

So let's consider this: why do the Astros, who very, very publicly cheated their way to a title, forever blemishing the MLB record book and leaving teams such as the Dodgers and Yankees to wonder what might have been if they'd been given a fair chance, not lose a single day of playing time, nor a penny of a fine, and get to keep the prize gained by their cheating; yet Rose remains banished for life, unable even to be in the Hall of Fame after his brilliant career?

Rose lied for years about his gambling but finally admitted in 2004 that he bet on the Reds to win games while he was their manager. At the time he accepted his ban, which was supposed to be reviewed later, banned players were eligible for the Hall of Fame. It was not until 1991, a year before Rose's name would have appeared on the ballot, that the MLB Hall of Fame voted to exclude players who had been placed on the permanent ineligibility list. So, not only did Rose get punished under the rules that were on the books at the time of his transgressions, he was singled out for further punishment after the fact.

Critics say gamblers could have watched Rose's betting habits and made their own bets based on what they read into his actions. Here's a bet: those would be the same kinds of gamblers who know the Astros were stealing signs and adjusted their bets accordingly.

You know what else Rose did?

He helped blaze good race relations on the team at a time when race relations in post-integration sports were especially tense. His rookie season he displaced a popular white veteran and later said the only teammates who treated him well in those early years were the non-white players. Now, geographically the Mason-Dixon line is well south of Cincinnati, but culturally it ran right through it, so the hometown boy's embrace of teammates of color not only helped acceptance and peace within the team, but helped set a more welcoming tone for the entire city.

I witnessed much of that because I was born in Cincinnati and was there at various points throughout Rose's career to witness the events and emotions. Our fathers even played semi-pro football against each other. I remember asking my beloved grandfather why the Reds traded away National League MVP Frank Robinson and my grandfather, without a pause, replied, "Because the n— in him was starting to come out."

One huge step in my adolescent awareness of the insidious and ubiquitous nature of racism.
Rose was nicknamed "Charlie Hustle" because he always ran out every play, made up for any athletic shortcomings by his competitive unrelenting work ethic. That, too, rubbed off on me, and for decades when I was temporarily stuck for words while writing, I would get to my feet and drop into a low Rose crouch for a few swings to help me clear my thoughts.

Those who would discount all that while defending his ban say, "Well, he gambled." Well, duh — people with gambling addictions gamble. Drug addicts take drugs and they are forgiven, helped even. For public image considerations, though, MLB's compassion draws the line at other addictions that have nothing to do with on the field conduct.

Rose lied, they say. Again, duh! Addicts lie. So when Rose was asked if he did something that would get him banned for life, he did what addicts do: he denied to us and he denied to himself.

"Rose was his own worst enemy," they say. Sheesh! Rose did injure himself, repeatedly, for years. No need to pile on.

Rose created excitement in baseball. Love him or hate him, he got you excited about the games and the pennant races. He taught kids to love the game and to throw themselves into it completely.

The Astros? Their cheating triggers feelings of disgust, anger, outage, disappointment, and disillusion. They have turned the 2017 World Series trophy into a monument of shame. They are the Voids of Summer.

Pride and prejudice in soccer
The good news: In a German soccer game last weekend, Preussen Munster fans turned in one of their own in a home match against the Wurzburger Kickers when he made racist monkey noises toward a Ghanian defender, Leroy Kwadwo, for the Kickers.

"As repulsive as the monkey noises against the player were, the subsequent response from the rest of the spectators were so impressive," the Preussen Munster club said in a written statement. "Not only because they pointed out the perpetrator and made him recognizable for the law enforcement, but rather with the unmistakable 'Nazis Out' chanting."

The club said the fan was arrested after being ejected.

Meanwhile in France, two women say they were made to take down their rainbow flag when Israel Folau, criticized back home in Australia for his outspoken stance against same-sex marriage and condemnation of homosexuality, made his debut for the French club Catalans Dragons.

The women said they were told they could not show the flag "on health and safety grounds." The club later said the flag was removed because it covered advertising. A league investigation is being conducted.

Meanwhile, the British rugby team Hull FC said the rainbow flag will be welcome in its stadium when Folau and the Dragons visit at the beginning of March. By the way, the day Folau signed with Catalan, the Wigan Warriors announced moments later that their March 22 home match against the Dragons would be their Pride Day.