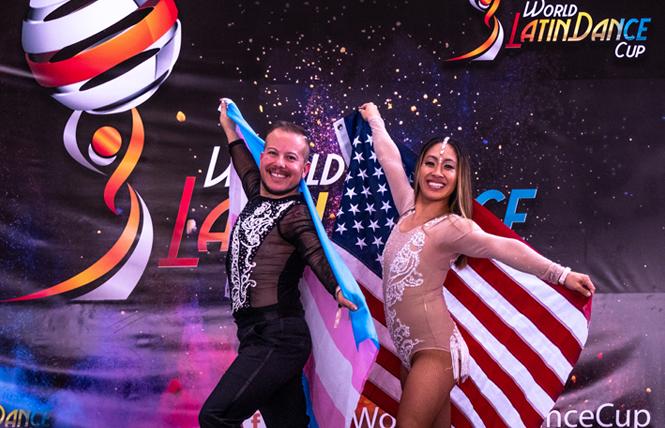 A Bay Area transgender man is crediting his love of dance with helping him find acceptance, and in the process, winning competitive awards.

"I felt like coming that far and winning the gold medal, it felt important for me to represent visually that I was trans," Gutierrez-Mock said about the livestreamed competition and awards ceremony where he proudly held up the trans pride flag when the dance pair won. "It felt very important to me to have that visibility."

The pair aren't romantically involved but share a love of dance. Gutierrez-Mock and Huynh met at Inlak'ech Dance Academy, a queer dance studio in Oakland. In 2019, they moved to Kathy Reyes Dance to learn choreography and train for the competition, he said.

It was the first time the bachata, a style of dance that is originally from Dominican Republic, was introduced into the competition, which has more than 200 dance categories and more than 1,000 competitors from around the world. Bachata is a sensual dance that is heavily influenced by merengue, which is also from the Dominican Republic. It's infused with a mixture of Cuban dances, like the son (pronounced like shone).

The pair were the only competitors in the category, but they had to undergo scrutiny by a panel of judges and fulfill a list of criteria in order to win, Gutierrez-Mock said.

This was the second time the two competed in the competition. In 2018, Gutierrez-Mock became the first-ever openly transgender person in the competition's history as far as anyone knew, he was informed. He and Huynh placed 11th out of 14 couples, he said.

The dance pair definitely plan on competing again next year, but they haven't selected which category yet, he said.

The Bay Area Reporter reached out to the World Latin Dance Cup for comment but didn't receive a response by press time.

Gutierrez-Mock works as an HIV prevention researcher at the Center of Excellence for Transgender Health at UCSF. He got into dancing following a "really terrible divorce," from his ex-wife and a period of losing several friends who were murdered due to transphobic violence about three and a half years ago, he said.

Dance to healing
Dancing was a way for him to take care of himself through that dark period. It was a place where he found acceptance, despite it being the "straightest thing I've ever done in my life since I came out," he said.

"I really turned to dance to do my self-care and heal from all of the loss I was experiencing," said Gutierrez-Mock.

"I also think that competing as a dancer, people respect the amount of work, dedication, and effort that goes into this. People see that and other dancers respect that," he added.

Dancing transformed his life for the better.

"It's really changed a lot about how I view myself," he said. "[It has] taught me about [being] present and how I want to live my life every day."

It also has taught him how to be in his body.

Being judged based on his body has made him more confident than ever before.

"I thought that I was a fairly confident person going into all of this, but it's really shown me the ways in which I think that stigma impacted me as a trans person that I had never noticed," due to transphobia and homophobia, he said.

Dancing also broke down the binary gender system as "skills" rather than gender for him, said Gutierrez-Mock, who likes to lead in competitions, but said he likes to follow when dancing socially.

Gutierrez-Mock hopes his winning a dance competition will encourage other transgender people, especially Latinx folks, where dancing is a big part of the culture, to dance, whether competitively or not.

"Dance has been very healing," he said about his experience. "I hope that other trans people can see this and that dance can provide the same type of healing for them that it has for me."