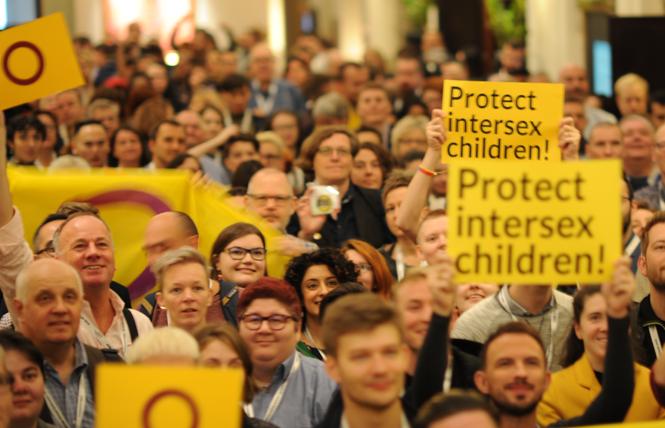 The state Legislature has been in session for only a couple of weeks and already, a state Senate committee has failed on intersex rights, voting down Senate Bill 201, which would have protected body autonomy of intersex people. Shame on those who voted no: Senators Dr. Richard Pan (D-Sacramento), Jerry Hill (D-San Mateo), Bill Dodd (D-Napa), and Scott Wilk (R-Santa Clarita).

Gay state Senator Scott Wiener (D-San Francisco) has been trying for years to get this legislation passed. He first offered a nonbinding resolution in an effort to educate lawmakers and the public, which passed out of the Legislature. He held an informational hearing at which intersex people and their allies told their stories. That was supposed to ease the way for actual legislation, which occurred last year. However, Wiener ran into forceful resistance from the California Medical Association, and ended up tabling the bill in order to address the concerns raised by medical groups. It needed to be approved in the Senate by the end of this month to remain active. Monday's 2-4 vote (and three abstentions) by the Senate Business, Professions, and Economic Development Committee rendered SB 201 dead for this year.

Intersex people, who account for 1 to 2% of the population, are defined as those born with any variation of reproductive or sexual anatomy characteristics including genitals, chromosome patterns, and sex hormones. While some intersex people also identify as transgender or nonbinary and members of the LGBT community, not all do. SB 201 would have required that any decisions about medically unnecessary surgical interventions in such cases be postponed until the patient is at least 6 years old. Wiener noted in a statement after the vote that he was "deeply disappointed." "These surgeries, often forced on intersex infants, can cause serious health repercussions, including sterilization and loss of sexual sensation," he stated. "We must allow intersex individuals to decide for themselves at the appropriate age if and when they undergo life-altering medical procedures."

Equality California, the statewide LGBTQ rights group, was harsher. "Today, California stumbled as a leader on human rights and LGBTQ equality," EQCA Executive Director Rick Zbur said in a statement. "Today's vote by the California Business, Professions, and Economic Development Committee means that the Golden State will continue to subject thousands of infants every year to medically unnecessary, harmful, and often irreversible procedures aimed at 'normalizing' their bodies."

Intersex people vowed to keep fighting. "Four members of the [Senate committee] voted today to continue allowing pediatric surgeons to cause documented, irreversible harms against children born with diverse sex traits," Kimberly Zieselman, executive director of interACT: Advocates for Intersex Youth, said in the EQCA statement. "Our fight for bodily autonomy is far from over. I'm heartened by the conversations SB 201 started, and by the increased awareness and concern for harmful medical interventions on intersex children."

As EQCA noted, the United Nations, World Health Organization, European Parliament, Human Rights Watch, and all major intersex-led groups have urged policymakers to address this issue. EQCA also pointed out that not unlike the survivors of so-called conversion therapy, people born with variations in their sex traits who are living with the results of medically unnecessary attempts at "normalizing treatment" often deal with the harmful emotional and physical consequences for the rest of their lives. Parents who express reluctance about surgery for their children born with variations in their sex traits are sometimes provided with insufficient information regarding the risks involved and the alternatives, including delaying surgery.

Doctors are also part of the problem; some are too eager to talk parents into getting surgery for their infants, when other alternatives might be available. Wiener attempted to adjust his legislation to address the concerns of the medical community. Two years ago, when Wiener authored his resolution and held a hearing, intersex advocates called out UCSF and said the teaching hospital should stop performing genital "normalization" surgeries. A family medicine doctor who is also an intersex person, Sugee Tamar-Mattis, said at the time that parents are misled by physicians to believe that their children will be bullied or there are negative psychological outcomes associated with having different genitals, although there is no credible evidence to support these claims. Tamar-Mattis said there is, however, extensive evidence of harm that can come from these surgeries, including loss of sexual sensation or function and incorrect surgical sex reassignment.

Wiener pledged to continue working on the matter, saying it is an LGBTQIA civil rights issue: "I will keep fighting for the intersex community and their right to decide what happens to their bodies."

This is not about life-or-death surgery, this is about medical procedures that parents often ask for — they, and their children, should be given other options.

Updated, 1/16/20: This editorial was updated to note there were also three abstentions on the committee vote.